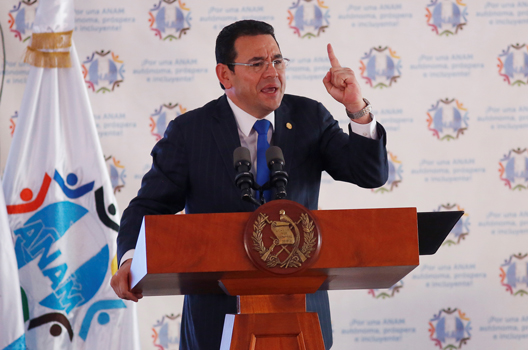 Guatemalan President Jimmy Morales shocked Guatemalans and the international community last week when he ordered the expulsion of Iván Velásquez, commissioner of the United Nations International Commission Against Impunity in Guatemala (CICIG), the organization leading the investigation into the illegal financing of Morales’ presidential campaign.

Guatemala’s Constitutional Court has blocked the expulsion order, which was condemned by the international community, on the grounds that Morales did not have the authority to expel Velásquez.  Morales is expected to accept the court’s decision. However, with the attempted expulsion Morales has jeopardized Guatemala’s advances against corruption and inched the country closer to a political crisis.

With the court’s intervention, Guatemala averted a constitutional crisis, but the damage is already done to Morales’ credibility and political standing. He chose to wage an ill-advised fight to expel an internationally respected anti-corruption commissioner, just two years after former Guatemalan President Otto Pérez Molina was removed on corruption charges.

Besides pushing for ambitious constitutional reforms, CICIG is recognized for spurring the ouster of Pérez Molina in 2015. CICIG and the attorney general’s office led by Thelma Aldana unveiled a massive tax fraud scheme led by Pérez Molina and his vice president, Roxana Baldetti. This revelation led Guatemalans out into the streets by the thousands, ushering in a new era of civil engagement. This is why the Atlantic Council’s Northern Triangle Task Force recently recommended that  Guatemala, the United States, and the international community strengthen and adequately support CICIG going forward. Had Morales succeeded in his attempt to expel Velásquez it would have accomplished the opposite aim, significantly undermining the rule of law.

Its ability to mobilize civil society has made CICIG one of Guatemala’s most respected institutions. An Atlantic Council poll commissioned by CID-Gallup in August 2016 showed that 81 percent of Guatemalans approved of CICIG’s work on combatting impunity and corruption. On the other hand, only 30 percent of Guatemalans had a favorable view of Morales.

While Velásquez will remain in his post, Morales has significantly damaged his credibility, both domestically and internationally. Already hundreds of Guatemalans have taken to the streets calling for his resignation. By attempting to undermine the rule of law and the fight against corruption, Morales—a former comedian elected as president of Guatemala in 2015 amid the deep discontent of citizens towards the political establishment—betrayed his campaign slogan of ni ladrón, ni corrupto (“Neither a thief nor corrupt”). This ideal was the main reason he was elected.  Moreover, in the aftermath of Morales’ decision, three members of his cabinet, including Foreign Minister Raúl Morales, either resigned or were removed by the president.

There is also international outcry. Members of the US Congress; UN Secretary General Antonio Guterres; the US Department of State; and the embassies of the United States, Germany, Canada, Spain, France, Italy, the United Kingdom, Sweden, Switzerland, and the European Union in Guatemala denounced Morales’ decision and reaffirmed their unequivocal support of Velásquez.

Why, then, make such a polemic and unpopular decision? CICIG and the Public Ministry are investigating several political parties—including Morales’ National Convergence Front (FCN)—on suspicions of accepting illicit funds during the 2015 presidential election. According to Aldana and Velásquez, nearly $1 million in anonymous contributions to the Morales presidential campaign went unreported. As they announced the investigation, Aldana and Velásquez also requested that Morales’ presidential immunity be stripped, since Morales was both FCN’s secretary general and finance head at the time.

While Morales indicated that his targeting of the commission was based on allegations that Velásquez unduly pressured members of Congress to vote in favor of proposed constitutional reforms, the alleged interactions occurred four months ago, whereas the investigation into his campaign finances was announced last week. The timing thus raises serious doubts about his motives for attempting to expel Velásquez. The relationship between Morales and CICIG had already soured following the prosecution and subsequent arrest of his son and brother earlier this year on corruption charges.

Internationally, US assistance to Guatemala—already facing deep uncertainties—may suffer as a result of Morales’ widely condemned attempt to dismiss Velásquez. Champions for the region in the US Congress—which provides more than half of CICIG’s $13 million annual budget—have repeatedly praised  Velásquez’s work as commissioner. US Representatives Ed Royce (R-CA) and Eliot Engel (D-NY), chairman and ranking member of the House Foreign Affairs Committee, respectively, condemned Morales’ decision, with Engel adding that they will review US assistance to Guatemala.

Considering US interactions with Guatemala as part of a bloc with El Salvador and Honduras—which together comprise Central America’s Northern Triangle—Morales’ decision may have negative implications for all three countries. In the current political climate in Latin America, when many countries are takings steps to eradicate corruption at the highest levels, attempting to remove Velásquez was nothing short of reckless.

Juan Felipe Celia is a program assistant in the Atlantic Council’s Adrienne Arsht Latin America Center. You can follow him on Twitter @jfcelia.