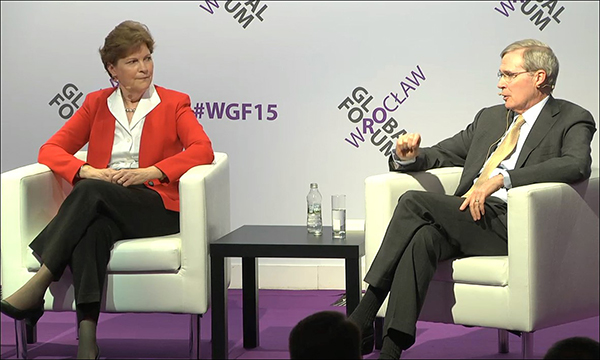 The United States and its European allies must dramatically step up efforts to help the Ukrainian people defend themselves from Russian President Vladimir Putin and his proxies in eastern Ukraine, said Stephen J. Hadley, who served as National Security Adviser under US President George W. Bush.

“Ukraine has to succeed. It is facing an enormous existential challenge,” Hadley warned. “We can’t do things in our traditional, methodical way. We have to do something dramatic. They will not extricate themselves from the economic crisis that the Russian invasion has intentionally put them in. Russia is banking that we will allow them to fail, and that the Ukrainian people will decide at some point that turning west was a mistake.”

The former security official—who served in the White House from 2005 to 2009—made his comments in a conversation with Sen. Jeanne Shaheen (D-NH) that was moderated by Jan Cienski, Energy and Security Editor of Politico.

Hadley, now Chairman of the taxpayer-funded US Institute for Peace, suggested that once weapons “start showing up in Ukraine from Western sources, that would have the biggest impact on Putin’s calculations.” He took issue with critics who say there’s little point in arming the Ukrainians, since they can’t defeat the Russian Army anyway.

“This would recognize the right of people to have the means to defend their country, but it will also raise the cost of Russia’s policy,” Hadley said. “Even Putin is sensitive to body bags coming back with Russian soldiers killed in this Ukraine adventure.”

Shaheen, noting widespread bipartisan support in Congress for giving Ukraine non-lethal weapons, said that up until now, US President Barack Obama has been unwilling to send lethal weapons to Ukraine under terms of the so-called Minsk II agreement, which aims to end the war in eastern Ukraine.

“But as time goes on and Putin fails to comply with the Minsk agreement, that will be re-evaluated,” she predicted.

Shaheen—the first woman in American history to be elected both Governor and US Senator —also said some of Obama’s critics have misinterpreted the President’s widely publicized “pivot to Asia” as meaning the United States has lost interest in Europe.

“The fact is, Putin’s actions in Ukraine and Eastern Europe have probably united Congress on foreign policy more than anything since I’ve been there,” she said. “We need to be more strategic not just how to respond in Ukraine, but also with regard to Putin’s next steps, and how we can take action now to counter whatever those steps are.”

But she also called on Europe to assume a greater financial burden for defense.

“Europeans must ramp up their own defense spending in a way that shows they’re committed. We saw some pledges in Wales, but now we need to see people follow through on that,” Shaheen said, adding that “just as Europe has its own challenges, we have our own. We’re coming out of the longest war in Afghanistan, and the American public is concerned about potential engagement around the world. We have to be responsive to those concerns.”

When he was in government, Hadley recalled, the talk was “all about 4 percent” of GDP as a target for NATO member nations to spend on defense. “Now it’s 2 percent, but let’s not say that if we raise our defense spending to 2 percent, we’ve solved the problem.”

Among other actions, he said, countries along Russia’s borders “need to harden their own societies to be more resistant to Russian propaganda and subversion. How do they do this? One way is dealing with the grievances of their Russian-speaking minorities, making sure they are included. That can do a lot toward countering the propaganda.”

Cienski, calling the EU’s recent Eastern Partnership summit in Latvia “generally disappointing,” asked his panelists what they thought about the 28-member bloc’s “usual contortions to avoid providing a path to eventual EU membership” for countries like Georgia and Moldova waiting in the wings.

“I hope we see a path to EU membership for all those countries,” said Shaheen. “It would require action to reform corruption, but that is the future of Europe.”

Like the EU, NATO also has twenty-eight members and is also based in Brussels. Hadley questioned the NATO policy—established in 1999—of requiring countries to follow a Membership Action Plan before they can gain full entry into the military alliance.

“Once you put a country on MAP, you’ve invited them to be a target. Maybe we should have a less structured process; prepare them quietly, and then at some point just make them members,” he said. “Our process for considering membership in NATO may have made sense when Europe was not in crisis. But because of Russian policy, Europe is now in a different place, and we need to re-examine these mechanisms and decide whether they are appropriate.”

He added that the former Yugoslav republics of Macedonia and Montenegro should both be admitted to NATO as a way of reducing Moscow’s influence in the Balkans.

“One of the things the EU needs to think about is Putin’s strategy of creating frozen conflicts between Russia and the EU, on the theory that the EU will not touch these countries if there’s a frozen conflict. But what if the EU took that off the table in the same way they accepted Cyprus?” he asked.

“Let’s start taking away levers that support Russian policy,” Hadley said. “Let’s show the door is open to NATO membership by taking Macedonia and Montenegro in, and for the EU to say a frozen conflict is not a reason why a country cannot move toward membership.”