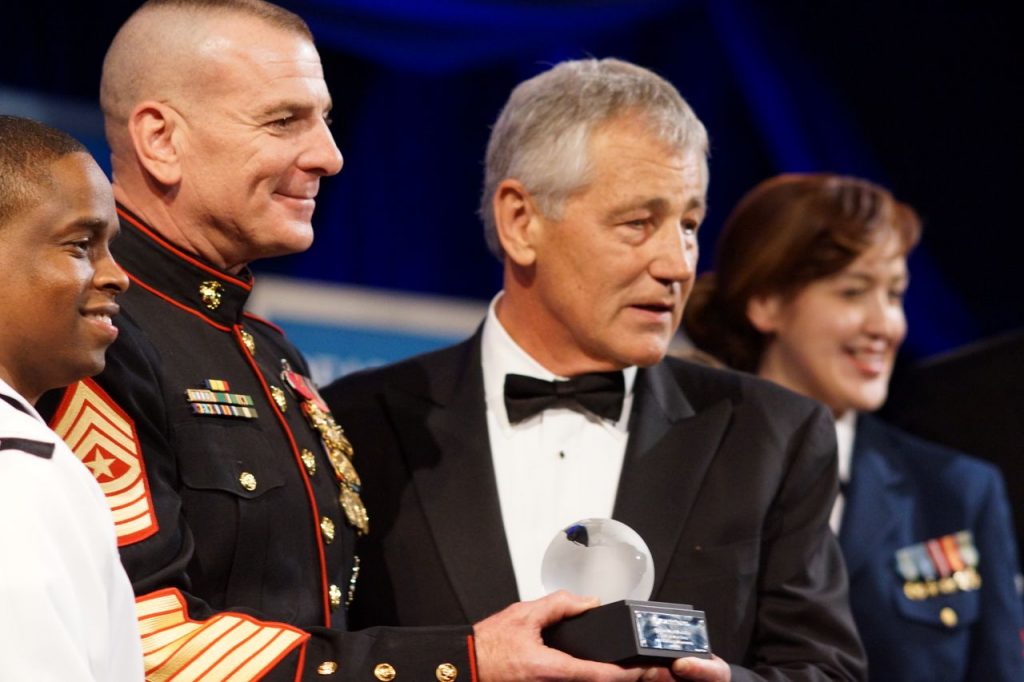 The Atlantic Council presented its 2012 Distinguished Military Leadership Award not, as has been the custom, to a famous general or admiral but to the Enlisted Men and Women of the United States Armed Forces.
Marine Sergeant Major Bryan B. Battaglia, the senior enlisted advisor to the chairman of the Joint Chiefs of Staff, accepted the award on behalf of the entire active and reserve enlisted force, who he termed “a diverse and powerful composition reaching all walks of life” and possessing “a robust strength, riveting skill, and the grit to carry a heavy load.” He added that our one million enlisted men and women “look for no fanfare but rather a patriotic opportunity to make a difference and make our country a better place.”

Senator Chuck Hagel, chairman of the Atlantic Council and a former Army sergeant twice wounded in combat in Vietnam, observed, “I doubt if there’s an officer in this room who would disagree” with the praise heaped on the enlisted force or in presenting them with this honor. Certainly, not this former junior officer and son of a career enlisted soldier.

Battaglia noted that enlisted men and women comprise more than eighty percent of our force. But they’re almost the entirety of the proverbial “tip of the spear.” An infantry platoon has but a single officer and 36 to 42 junior soldiers and non-commissioned officers. They’re not just the “backbone” of the force; they are the force at the point of battle. As Hagel put it in his introduction, “the enlisted men and women of any country’s armed force that makes up the sinew and the blood and tissue and the muscle and the fabric and the spirit of our services.”

Hagel added, “Enlisted men and women don’t have much to do with making policy, but they always carry it out.” In recent wars, that’s been even more true. In 1999, Marine Corps Commandant Charles Krulak coined the term “strategic corporal” to describe just how important decisions made by our most junior leaders can be in shaping the success or failure of the mission.

The inescapable lesson of Somalia and of other recent operations, whether humanitarian assistance, peace-keeping, or traditional warfighting, is that their outcome may hinge on decisions made by small unit leaders, and by actions taken at the lowest level. The Corps is, by design, a relatively young force. Success or failure will rest, increasingly, with the rifleman and with his ability to make the right decision at the right time at the point of contact. As with Corporal Hernandez at CP Charlie, today’s Marines will often operate far “from the flagpole” without the direct supervision of senior leadership. And, like Corporal Hernandez, they will be asked to deal with a bewildering array of challenges and threats. In order to succeed under such demanding conditions they will require unwavering maturity, judgment, and strength of character. Most importantly, these missions will require them to confidently make well-reasoned and independent decisions under extreme stress — decisions that will likely be subject to the harsh scrutiny of both the media and the court of public opinion. In many cases, the individual Marine will be the most conspicuous symbol of American foreign policy and will potentially influence not only the immediate tactical situation, but the operational and strategic levels as well. His actions, therefore, will directly impact the outcome of the larger operation; and he will become, as the title of this article suggests — the Strategic Corporal.

From Abu Ghraib to Zangabad, we’ve seen how actions by junior soldiers and marines can undermine months and years of hard work and good intentions. But, given the sheer number of troops deployed and the degree to which they’ve been stressed and strained for going on two decades, it’s amazing, indeed, how disciplined and well led they are. As Krulak noted–before 9/11 and the wars in Iraq and Afghanistan:

Since 1990, the Marine Corps has responded to crises at a rate equal to three times that of the Cold War — on average, once every five weeks. On any given day, up to 29,000 Marines are forward deployed around the world. In far-flung places like Kenya, Indonesia, and Albania, they have stood face-to-face with the perplexing and hostile challenges of the chaotic post Cold War world for which the “rules” have not yet been written. The three block war is not simply a fanciful metaphor for future conflicts — it is a reality. Like Corporal Hernandez, today’s Marines have already encountered its great challenges and they have been asked to exercise an exceptional degree of maturity, restraint, and judgment.

Marines, of course, have always shone most brightly when the stakes were highest. The NCO’s that led the bloody assaults on the German machine-gun positions at Belleau Wood intuitively understood the importance of their role. The Marines of 2d Battalion, 28th Marines, who scaled the fireswept heights of Mount Suribachi needed no one to emphasize the necessity of initiative. The Marines of the Chosin Reservoir, of Hue City, and of countless other battles through the years did not wait to be reminded of their individual responsibilities. They behaved as Marines always have, and as we expect today’s Marines and those of the future to behave — with courage, with aggressiveness, and with resolve. The future battlefields on which Marines fight will be increasingly hostile, lethal, and chaotic. Our success will hinge, as it always has, on the leadership of our junior Marines. We must ensure that they are prepared to lead.

How do we prepare Marines for the complex, high-stakes, asymmetrical battlefield of the three block war? How do we develop junior leaders prepared to deal decisively with the sort of real world challenges confronting Corporal Hernandez? The first step of the process is unchanged. Bold, capable, and intelligent men and women of character are drawn to the Corps, and are recast in the crucible of recruit training, where time honored methods instill deep within them the Corps’ enduring ethos. Honor, courage, and commitment become more than mere words. Those precious virtues, in fact, become the defining aspect of each Marine. This emphasis on character remains the bedrock upon which everything else is built. The active sustainment of character in every Marine is a fundamental institutional competency — and for good reason. As often as not, the really tough issues confronting Marines will be moral quandaries, and they must have the wherewithal to handle them appropriately. While a visceral appreciation for our core values is essential, it alone will not ensure an individual’s success in battle or in the myriad potential contingencies short of combat. Much, much more is required to fully prepare a Marine for the rigor of tomorrow’s battlefield.

An institutional commitment to lifelong professional development is the second step on the road to building the Strategic Corporal. The realignment of the Recruit Training and Marine Combat Training programs of instruction reveal our reinvigorated focus on individual training. Those programs remain the most important steps in the methodical process of developing capable Marines. Our Formal Schools, unit training and education programs, and individual efforts at professional education build on the solid foundation laid at recruit training and sustain the growth of technical and tactical proficiency and mental and physical toughness. The common thread uniting all training activities is an emphasis on the growth of integrity, courage, initiative, decisiveness, mental agility, and personal accountabilty. These qualities and attributes are fundamental and must be aggressively cultivated within all Marines from the first day of their enlistment to the last.

Leadership, of course, remains the hard currency of the Corps, and its development and sustainment is the third and final step in the creation of the Strategic Corporal. For two hundred and twenty-three years, on battlefields strewn across the globe, Marines have set the highest standard of combat leadership. We are inspired by their example and confident that today’s Marines and those of tomorrow will rise to the same great heights. The clear lesson of our past is that success in combat, and in the barracks for that matter, rests with our most junior leaders. Over the years, however, a perception has grown that the authority of our NCO’s has been eroded. Some believe that we have slowly stripped from them the latitude, the discretion, and the authority necessary to do their job. That perception must be stamped out. The remaining vestiges of the “zero defects mentality” must be exchanged for an environment in which all Marines are afforded the “freedom to fail” and with it, the opportunity to succeed. Micro-management must become a thing of the past and supervision — that double-edged sword — must be complemented by proactive mentoring. Most importantly, we must aggressively empower our NCO’s, hold them strictly accountable for their actions, and allow the leadership potential within each of them to flourish. This philosophy, reflected in a recent Navy Times interview as “Power Down,” is central to our efforts to sustain the transformation that begins with the first meeting with a Marine recruiter. Every opportunity must be seized to contribute to the growth of character and leadership within every Marine. We must remember that simple fact, and also remember that leaders are judged, ultimately, by the quality of the leadership reflected in their subordinates. We must also remember that the Strategic Corporal will be, above all else … a leader of Marines.

Thanks to a robust military education system designed to inculcate these values and the outstanding leadership of men like Sergeant Major Battaglia, this ideal is being realized.