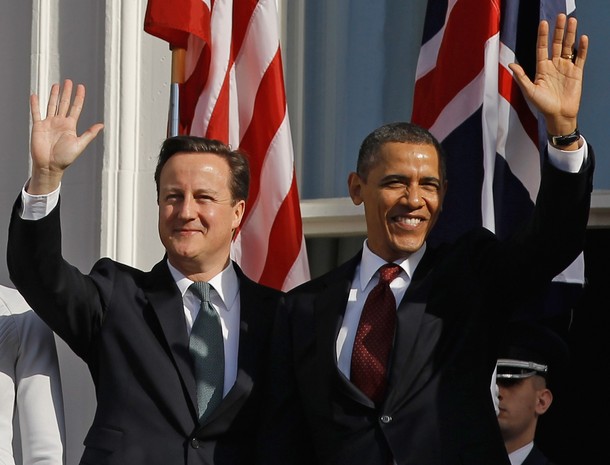 To his base on the right, it was yet another slam-dunk for David Cameron. The British Prime Minister, fresh from delivering a black eye to those presumptuous Europeans, received the royal treatment in the United States last week, with an unprecedented trip on Air Force One, redcoats marching on the White House lawn and even—here Thatcherites begin to swoon—some welcome reassurance as to America’s position on sovereignty over the Falkland Islands. Thus the twin talismans of Tory foreign policy—Euroskepticism and the Special Relationship—have been burnished anew.

For internationalists of a more ecumenical stripe, however, the Westminster Village must have seemed a lonely place of late. Resurgent Euroskepticism on his right flank made the prime minister’s veto of the ‘Merkozy’ Fiscal Pact—ostensibly to protect Britain’s financial services industry—an existential necessity for his premiership; but that did nothing to mitigate the scale of the diplomatic disaster. Nicolas Sarkozy—with whom relations had previously been warmer amid the prospect of Anglo-French defense cooperation—took particular offense. Closer to home, Scottish independence—and therefore the end of the ‘United’ Kingdom itself—is a genuine possibility within the next few years.

Meanwhile, on the left bank of the Pond, the economy is improving, to the point where a ”foreign policy election” may be in the cards for November. Barack Obama has some notable achievements in this realm. He has identified America’s enemies and frequently dispatched them with a ruthlessness from which even his predecessor might have shrunk.

With partners, however, he does not do as well. His troubled relationship with the current Israeli administration culminated in an excruciating public dressing-down from Binyamin Netanyahu. Europeans, for their part, resent what they perceive as American lecturing about a “lack of political will” on the continent, especially at a time when US politics is itself hopelessly dysfunctional. Talk of a ‘pivot’ toward East Asia—and, by implication, away from everybody else—scarcely helps matters.

Both Cameron and Obama, therefore, need friends; and friendship was, indeed, what the official visit was designed to project. The corny jokes, the winsome stabs at British English, and especially the visit’s centerpiece—a ”March Madness” basketball game in the heart of the Heartland—hit just the right tone of easygoing rapport. For official gifts, Obama produced a charcoal grill, while Cameron offered the President a ping-pong table.

Leaving aside the political benefits to each man, this marks a significant improvement in Anglo-American relations. Obama’s government has previously showed a striking lack of sensitivity towards Britain, unceremoniously removing a bust of Winston Churchill from the Oval Office, repeatedly referring to the Falkland islands by their Argentinean name (“Malvinas”) and giving Gordon Brown, Cameron’s predecessor, a clutch of DVDs that could only be played in America.

After three years of diplomatic missteps, the administration appears finally to be learning that, however strong its entirely laudable desire to recognize new geopolitical realities, America neglects its traditional allies at its peril. No East Asian nation could have accomplished what NATO allies were able to achieve in Libya. Support from Europe has been vital in implementing effective sanctions against Iran and in pressing forward on missile defense. And, of course, Israel remains an indispensable partner in the Middle East. Hence the conspicuous chumminess of the official visit; but hence, also, efforts to defuse relations with Netanyahu over the past few weeks.

Comparatively little attention has been paid, on either side of the Atlantic, to the actual topics of discussion between Obama and Cameron. No doubt this is primarily because they produced so little tension. Almost the sole likely point of disagreement will have been the extradition of UK nationals to the US, a perennial sore point in British politics. Other than that, they are likely to have agreed on almost everything; and this serves to illustrate a key point. There is a lot of cynicism about the relationship between the UK and the US, particularly in the British press, where optimism of any kind is regarded as a species of mental disorder. To the extent that it implies exclusivity on either side, the term ”Special Relationship” is indeed inaccurate and unhelpful. But it remains the case that, in a crisis, America and Britain have no more reliable allies than each other. And in that there is surely no shame for either.

A.J. Wilson is a visiting fellow with the Atlantic Council’s International Security Program and a former political advisor in the UK Parliament.