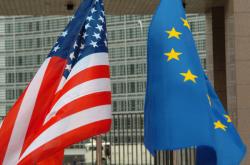 Over at Foreign Policy’s new blog, Dov Zakheim, Vance Serchuk and Christian Brose have been discussing the future of NATO, the Afghan mission and the place of Europe in America’s national security thinking.

Chris comes up with a frank assessment of where things are headed–one which may not be too pleasing to European ears: “It might just mean that the primary mission now for NATO as an institution is simply to add greater international legitimacy to what is becoming a more unilateral exercise of American power.”  One might add that this is not the preferred outcome of the incoming Obama foreign policy team, which has staked its own credibility on its ability to convince Europe to assume more of the burden in places like Afghanistan.

Dov argues that “Afghanistan is still viewed around as the ‘good war.’  That fact, and the goodwill that is showering Barack Obama, offer him a major opportunity to turn the tide against the Taliban once and for all.  And now the ball is in his court.”  But the preliminary reaction is not encouraging.  France’s Defense Minister Herve Morin has already stated, quite clearly, that additional French troops for Afghanistan will not be forthcoming.  And, if I’ve gauged public opinion in many European countries (including the United Kingdom, Germany and Italy) correctly, my assessment is that many would be satisfied with an outcome that could leave the Taliban (or Taliban-like elements) in control of much of the country as long as there is a reduction in the drug trade and in the freedom given to extremist elements to plan terrorist operations that strike targets in the West.  The British, in particular, seem much more interested in pursuing a negotiated settlement than I perceive is the case with the Obama Administration.

So I see Afghanistan, far from being a way to reinvigorate NATO, as a source of continued stress in the trans-Atlantic relationship.

Perhaps this is why Vance, in a conscious or unconscious echoing of Nicolas Sarkozy, argues for keeping the focus of the trans-Atlantic relationship on Europe.  Europe is not yet “solved,” and conflicts in the Balkans and on Europe’s Eurasian periphery still could destabilize the continent.  Very true.  But I think that there is a growing disconnect between how Washington views these problems and the perspective in many European capitals.  Again, my read is that most Europeans see these as containable issues.  Yes, there can be disruptions, I’ve heard it argued–but in the end, the EU under the presidencies of Sarkozy (during the Russo-Georgian conflict) and Mirek Topolanek (during the gas crisis) found solutions–and did so without the active involvement of the United States.  Indeed, some across the ocean have argued that Washington’s mixed signals to Presidents Saakashvili of Georgia and Yushchenko of Ukraine helped precipitate the conflicts in the first place!  And the growing confidence of the EU in the Balkans–from the experiences of their European Development Agency to the way in which the simmering problems of the Balkans have not yet spilled over to disrupt the continent as a whole–has changed their perspective.  I don’t think that anyone wants the U.S. out of Europe or to see NATO dissolved–but in contrast to the early 1990s I do believe that there is less trust that “Washington knows best” or that the American lead is always needed.

In other words, I would agree that many European capitals are happy that there’s a new Administration in Washington–but they aren’t eager to suddenly and quickly fall in line behind whatever initiative suddenly emerges from Washington.  And this could prove to be a rude awakening for those who have assumed otherwise.

Nikolas K. Gvosdev is on the faculty of the U.S. Naval War College.  The views expressed are his own and do not reflect those of the Navy or the U.S. government.