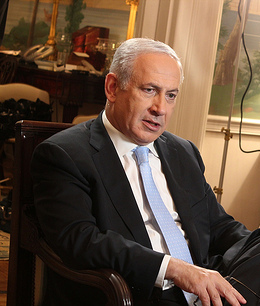 The much-anticipated breakthrough in the negotiations aimed at preventing Iran from building nuclear weapons has yet to materialize. But Israeli Prime Minister Binyamin Netanyahu, who believes that a wily Iran is outwitting its gullible interlocutors, isn’t breathing any easier; instead, he’s breathing fire. The statements from those involved in the talks (Iran and the P5+1) indicating that the obstacles to an interim accord are being overcome have incensed Netanyahu. And he has made his displeasure known—publicly and without pulling punches—even though the first-step agreement with Iran couldn’t be reached in the end.

As the upbeat reports streamed in last week, Netanyahu declared that a compromise with Iran would be a betrayal of Israel as well as a strategic blunder that would eventually bring grief to other states as well. He continues to insist that Israel will neither be bound by any deal, short of one that ensures denuclearization, that the P5+1 reaches with Iran nor rule out any response (read: a military strike) it deems necessary to defend its interests.

What are those Israeli interests? While Iranian leadership remains adamantabout retaining an independent nuclear fuel cycle, which it regards as its right under the terms of the NPT, Israel has made it just as plain that Iran’s acquisition of that capability is unacceptable—period. That’s because the Israeli leadership is convinced that any accord that permits Iran to enrich uranium to a level needed for generating electricity, even under strict verification, enables it to gain, and pretty quickly, the capacity to dash across the nuclear threshold when it wishes to do so.

While this perspective explains Netanyahu’s scorn for the negotiations, he risks becoming isolated should the dealmakers eventually start viewing him as an obstreperous maximalist who is heedless of the risk of war. Moreover, he doesn’t have sure-fire options for dismantling Iran nuclear complex, which consists of  many facilities, widely dispersed and well protected. The most critical one, nestled deep underground within a mountain, is the Fordow site, and its -three thousand-plus centrifuges have enabled Iran to spin out enriched uranium from uranium hexafluoride gas (UF6) to a level of 19.75 percent. Four other installations are crucial if Iran is to build a nuclear weapon: i) the Esfahan uranium conversion plant, where yellow cake is turned into uranium oxide and uranium hexafluoride; ii) the Natanz centrifuge complex; iii) the IR-40 heavy water reactor at Arak, which, though yet to be fueled, offers a plutonium pathway to nuclear arms; iv) the weapons design, manufacture, and testing center at  Parchin, where work on warheads may have been underway already.

The operational problems Israel faces in destroying these and other sites simultaneously are formidable and have been widely discussed by specialists. Among the key questions are whether Israel has: i) enough air- and missile-delivered ordnance packing enough earth-penetrating power to get the job done; ii) the number of fighter-bombers required to reach the targets, destroy (rather than damage) them, and return intact; iii) viable plans to cope with the possibility that its strike aircraft may have to take circuitous routes to maximize safety, thereby reducing their range. Even those experts who offer  relatively optimistic assessments about Israel’s capabilities concede that a militarily complex and politically controversial campaign involving a full-blown, and unprovoked, attack on Iran will at best lengthen the time Tehran needs to build the bomb, rather than making it impossible for it to do so.

So Netanyahu’s first problem is that his assertions that Israel will do whatever is required to prevent an Iranian fuel cycle isn’t credible to those calling the shots in Tehran. Besides, that’s not their main worry; it’s the threat of an American attack (Washington does have the planes, missiles, and bunker-busting bombs with the necessary power, in particular the 30,000 pound  Massive Ordnance Penetrator) and the effect that the wide-ranging, hard-hitting economic sanctions are having on the Iranian economy—and might have on the weary Iranians, who’ve seen the value of the rial plunge and inflation soar. Iran’s leaders have squashed several protests since 1979, most recently in 2011, but they aren’t eager to face more, no doubt realizing that every regime’s luck runs out at some point.

Now that the negotiations have aroused expectations, Iran may be confident, no matter what President Obama has said about all options being open, that the United States won’t torpedo the talks so long as they appear to possess momentum and promise. And Tehran is evidently doing what’s needed to ensure that the diplomats on the other side of the bargaining table remain hopeful.

In short, Iran’s decision, following Hassan Rouhani’s election as president, to agree to negotiate without preconditions has put Netanyahu in a bad place. That Tehran took the decision because the sanctions had begun to bite hasn’t, oddly enough, seemed to vindicate the Israeli prime minister’s hang-tough stance. Moreover, Tehran’s change of course has increased the already abundant mistrust that Netanyahu harbors toward President Obama. The chemistry between them, never good, has been made worse by the positive comments emanating from the administration about the negotiations; and that will work to Tehran’s advantage.

Netanyahu has additional problems. The first is that Tehran won’t engage in a precipitous “breakout” given the risk that President Obama would then be compelled to resort to force. The second is that the sanctions haven’t forced Iran to abandon its insistence on having a fuel cycle, and there’s no evidence that they will. Even were Rouhani inclined to make such a concession in order to gain relief for the sagging Iranian economy—and there’s no evidence that that’s the case—he would never be able to sell such a deal to the hardliners at home. Nor would he get cover from the Supreme Leader, which means that he would be committing political suicide. The Iranian negotiators face their own domestic constraints, which is why Rouhani and his Foreign Minister and lead negotiator, Mohammad Javad Zarif, have never wavered from their position, one reiterated frequently and publicly, that Iran  will never forgo enrichment altogether. Even if a deal allows some enrichment, Iranian negotiators will have to win support at home before agreeing to the details concerning curbs on such third-rail issues as the disposition of the uranium that exceeds the agreed-upon enrichment ceiling and curbs on the Arak reactor.

The real question, then, is what kind of a deal is likely flow from the negotiations, even as an initial installment. The best that can be hoped for realistically is that Iran will agree to freeze further enrichment, to accept a ceiling on the degree of enrichment, to not fuel the Arak reactor, and to permit additional verification safeguards at its main installations, all in exchange for such sanctions relief as Obama can provide without first obtaining Congressional consent. The Iranians will doubtless insist that the rest of the P5+1 also ease up on sanctions, something Russia and China will be most inclined to do. Tehran’s bet is that even a minimal lifting of sanctions will, eventually, prompt other countries to reduce their economic pressure and that, in time, some will peel off from the sanctions system altogether, providing that the talks continue and hope endures. Once individual states start easing their penalties, it will be hard to reestablish a severe and comprehensive regime. Or so Iran may be calculating.

When it comes to stopping the Iranian nuclear program, Israel faces more than operational problems; there are political ones as well. An Israeli military strike on Iran, or any other response that involves force against Iran’s nuclear program, will be welcomed by the Sunni regimes in the Arab world, particularly in the Persian Gulf; but no Arab leader will applaud it publicly for fear that the “street,” and not just in the Arab segment of the Muslim world, will have a entirely different reaction. The Sunni-Shia divide is exaggerated, certainly when it comes to assaying Muslims’ reaction to an Israeli attack on Iran, and the outrage and protests in the Muslim world, and not just there, will exacerbate Israel’s isolation. The reaction within Iran itself will range between rally-around-the flag outrage, which the Iranian government will stoke and publicize, and getting on with the quotidian travails of making a living under hard economic conditions. Dissidents who use the attack as an opportunity to mobilize opposition to the regime will look like quislings and be quashed quickly, not least because they will be few in number.

The only deal that’s feasible given all of this appears to be one that allows Iran a fuel cycle but limits the amount of enrichment and the level of it (to 3.5 percent) and that, in addition, imposes even tighter verification mechanisms, including those provided for by NPT’s Additional Protocol. Iran signed the Protocol in December 2003 but has not permitted its provisions to be implemented. Tehran has, however, indicated that it might be  willing to do so under a quid pro quo. Negotiations aimed at gaining additional concessions from Iran—on such matters as the removing the uranium enriched above 3.5 percent—will doubtless continue, but hopes for denuclearization will go unrequited, even though Tehran will keep the process alive.

This accounts for Netanyahu’s combative mood. He found it easy to muster international support for a hard-line against Rouhani’s predecessor, Mahmoud Ahmadinejad, who was losing political ground at home and whose inflammatory rhetoric made him a reviled figure in much of the West. Rouhani, a smooth operator, has changed the game.

But if the Iranians appear to have outmaneuvered Netanyahu of late, their apparent confidence that he cannot exercise the military option under the current circumstances may be misplaced. The Prime Minister has domestic constraints of his own, having drawn a big red line and staked his reputation, which he much prizes, as a leader who can be counted on not to flinch when hard decisions are required to defend Israel—something he believes that only he can reliably do.

There is, in short, a game of chicken afoot between Israel and Iran. What’s not yet clear is which player, if either, will be the first to swerve.

Rajan Menon is the Anne and Bernard Spitzer Professor of Political Science at the City College of New York/City University of New York, nonresident senior fellow at the Atlantic Council, and the author, most recently, of  The End of Alliances (Oxford University Press, 2007).