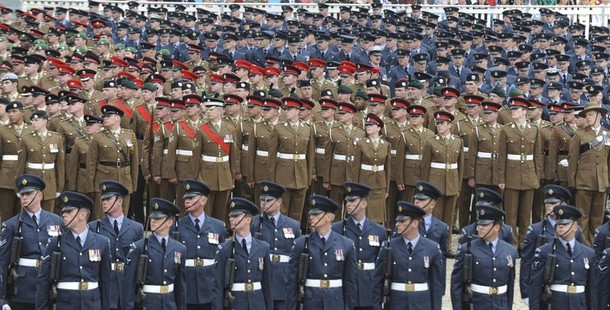 Winston Churchill once lamented the “Want of foresight, unwillingness to act when action would be simple and effective, lack of clear thinking, confusion of counsel until the emergency comes, until self-preservation strikes its jarring gong, these are the features which constitute the endless repetition of history.” Reading the speech of British Defence Minister Philip Hammond yesterday to the RUSI Land Warfare Conference I was tempted to say here we go again.

These were the words of a minister given the almost impossible mission to cut the British armed forces irrespective of the changing world beyond Britain’s shores. And yes, the very real danger exists that Britain will compound the profound loss of influence of late in Europe by in effect sacrificing the one tool that gives Britain real influence in the world – the British armed forces.

Now, it would be easy for me to jump on the bandwagon of criticism I can see rolling towards London. In fact Future Force 2020 and Army 2020 might just strike a much-needed balance between strategy, capability and austerity; if that is the politicians hold their nerve and do not again raid the defence budget simply to satisfy the latest adverse press headlines.

Specifically, come the 2015 Strategic Defence and Security Review Britain must re-commit to three simple defence strategic principles; sufficient military power to influence a changing US defence strategy, the absolute maintenance of Britain’s position as Europe’s leading military power and the use of military excellence to form strategic partnerships with key Commonwealth partners in and around Asia-Pacific.

Whilst the Hammond speech was couched in the ‘we only recognise as much threat as we can afford’ language so-beloved of this government there was much to commend it. The speech talked of facing the future with adaptable armed forces as part of a ‘Whole Force Concept’ that better integrates regular and reserve forces. This is common sense. However, what the speech lacked was a coherent statement of defence strategy that would provide context. Where is the vision, the level of ambition?

At the politico-military level such strategy would recognise that the shift in US strategy from a land-centric, regional focus to a maritime centric global remit has profound implications for Britain. The ability to work with European allies whilst important offers no alternative to a close defence relationship with the US. The imbalance of effort in Afghanistan demonstrates that under no circumstances should Britain allow itself to become reliant on European allies for effective operations simply to balance the books at home. That would render Britain utterly impotent both politically and militarily.

A Whole Force Concept is but at the military-strategic level what is needed is a Total Force Concept in which no single service owns land, sea or air. That in turn would require a new vision of military ‘jointness’ to re-establish Britain as a defence radical at the core of a hub of military excellence that preserves and enhances Britain’s ability to lead what might best be termed ‘junior coalitions’, i.e. those that do not involve the Americans.

Here’s the rub; the Royal Navy, Army and the Royal Air Force are developing all the components necessary for the strategic renovation of Britain’s post-Afghanistan armed forces. The Royal Navy’s two super-carriers will afford the British armed forces vital strategic projection for much of this century and help re-cement critical strategic partnerships with the likes of Australia, India and South Africa with whom Britain shares a military heritage. The new Astute nuclear submarines and Type-45 destroyers will enable Britain either to support the US or act as the core of future task forces and battle groups. The RAF’s emerging strategic lift capability will reinforce the strategic reach and re-supply Britain and its allies will need, although important gaps will need to be plugged in command and control capabilities, air-to-ground surveillance and maritime protection. Even though the Army will be reduced from 104,000 to 82,000 by 2020 if the future force is comprised of cutting-edge regiments that can provide the core of a rapidly expandable force that employs properly trained reserves then Britain will be well-served by these reforms.

That is the good news. If, however, Hammond’s speech was simply a return to the hollowed-out force that emerged from the Front-Line First reforms which and were found out by the 2003 Gulf War then Britain’s ability to influence both allies and environments will be nil. Greater reliance on reserves and the private sector for support must mean just that, not the creation of mythical structures that again fails Britain’s young people in uniform when the crunch comes, as it will.

My bet is that Future Force 2020 is too ambitious a target for this strategy-free government. In reality it will be 2025 or even 2030 before all the components are in place and Britain’s armed forces can again play their full role in the defence of Britain’s vital interests in the big twenty-first century. Moreover, there is a very real danger that the corporate memory of recent operations (a key British advantage) will be lost if a more systematic effort is not made to preserve them.

The British armed forces are a strategic brand and to destroy that brand in the name of the here and now would be a mistake that would set Churchill spinning in his grave.

Have the British Armed Forces met their Waterloo? No, not yet, but…