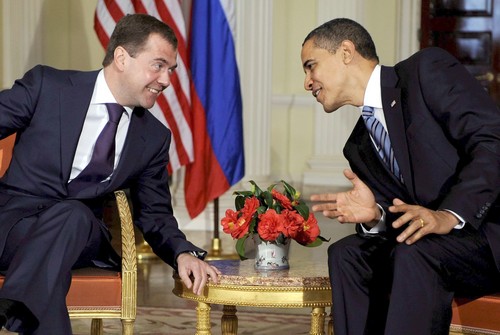 The recent spate of activity in U.S.-Russian relations is fundamentally about the whether the United States ought to be hedging against future Russian hostility.

In his op-ed on March 31 in the Washington Post, Russian President Dmitry Medvedev highlighted three areas of contention:

Unfortunately, relations soured because of the previous U.S. administration’s plans — specifically, deployment of the U.S. global missile defense system in Eastern Europe, efforts to push NATO’s borders eastward and refusal to ratify the Treaty on Conventional Armed Forces in Europe.

All three of these issues fundamentally represented the implications of an American hedging strategy against the return of an expansionist Soviet-style threat.

The problem with hedging is that the word contains two, quite different meanings.  On one hand, as a verb, “to hedge” often refers to efforts to “mitigate a possible loss by counterbalancing.”  On the other hand, as a noun, a hedge refers to a “row of bushes or small trees planted close together” which form a barrier that sets boundaries, provides privacy, but also obstructs a field of vision.

The challenge with our post-Cold War focus on hedging vis-à-vis Russia (and also China) is that in a practical sense, our hedges are not effective counter-balances, but are instead obstructions to a clear assessment of the future.  The problem is that our hedges do not actually mitigate risk, but instead increase it.  Much as “hedge funds” didn’t actually mitigate risk by investing in derivatives, but instead magnified it by leveraging correlated bets, our hedging strategies vis-à-vis those powers do nothing to counter-balance risks, but instead magnify them as well.

Why?  Because the hedge strategies we have adopted are only plausible in the absence of a genuine threat.  Consider the case of Georgia.  Admitting Georgia to NATO only makes sense as long as there is no real threat to Georgia from Russia.  If there were, it would be obvious that due to geography there was little we could do to defend Georgia from a Russian onslaught.  A hedging strategy that expands NATO eastward would merely transform a localized tragedy into an international crisis.  The consequences would not be a constraint on Russia, but would instead be the collapse of NATO.

Similarly, building military capabilities to defend Taiwan against China only work as long as China has no interest in actually attacking Taiwan.  If China really wanted to attack Taiwan, it could, simply by virtue of geographical proximity, quickly build up a military capability that would overwhelm any power we could project from a distance.  Our hedging strategy only provides risks by creating an impediment to genuinely cooperative relations with China and by giving Taiwanese nationalists the false hope that American power might ultimately secure full independence.

A proper hedging strategy would be one to assess possible future threats, seeks to develop capacity to deal with those that are in fact tractable through applications of American power and also seeks to develop mitigation strategies for threats that we cannot directly defeat.

There is likely to be little we can do, for instance, to prevent Russian efforts to assert a dominant political position in the Caucasus.  But we can work to mitigate the consequences of such political domination by ensuring our relations with Russia remain cordial and also thinking carefully about the long-term consequences of energy flows in the region.

America’s policy toward Russia could benefit from a clearer assessment of the possible, and as a consequence pursue genuine hedging strategies that mitigate rather than amplify risk.