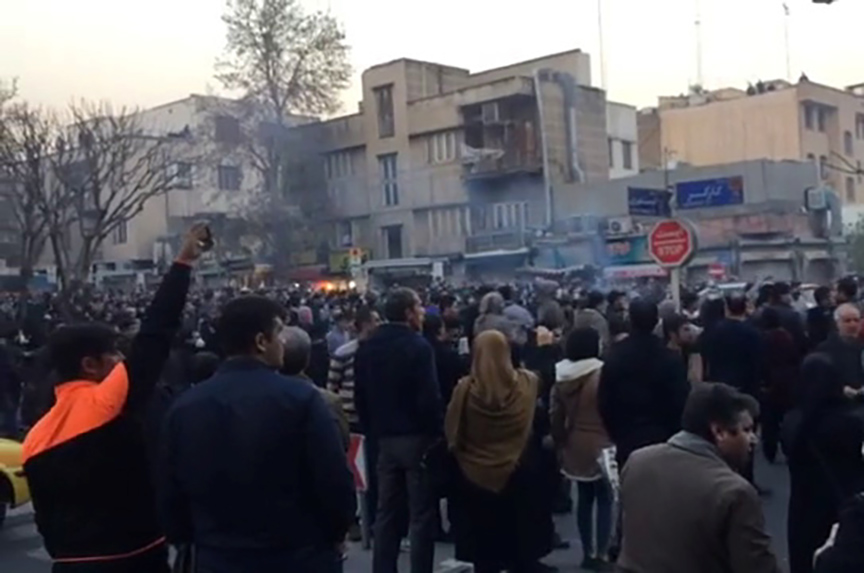 Iran has been rocked by the most significant protests in almost a decade. At least twenty people have been killed.

Amir Handjani, a senior fellow in the Atlantic Council’s South Asia Center and a Council board member, discussed the reason for the protests, the Iranian government’s response, and how US President Donald J. Trump should respond (Spoiler alert: Handjani says Trump should be frugal in his commentary on the situation). Here are excerpts from Handjani’s interview with the New Atlanticist’s Ashish Kumar Sen.

Q: Why are Iranians protesting in the streets?

Handjani: At first, it was [Iranian] President [Hassan] Rouhani’s rivals protesting his economic policies in Mashhad. The protests spread to other parts of Iran—mostly the rural areas. The protesters are people who have not seen the benefits of economic prosperity or any type of economic relief. There is inflation, food has become expensive, subsidies have been cut. That has been the main impetus for the protests. Some protesters have chanted anti-regime slogans and challenged Iran’s foreign policy.

Q: Why is Iran’s economy in such poor shape?

Handjani: Iran’s economy has been mismanaged for decades. Iran has been under sanctions for years, but the sanctions have not been the root cause of the economic hardship. The root cause is corruption, nepotism, and an economy that has ossified and has not been able to provide jobs for millions who enter the work force every year.

Iran’s economy has perpetually been in a state of turmoil. With high prices, inflation, and devaluation of the currency, it has been one tsunami after another.

Q: Has Iran’s economy benefited from the lifting of Western sanctions that followed the nuclear deal?

Handjani: It has benefited, but that being said, the trickle-down effect to the average citizen has not really materialized. Rouhani oversold sanctions relief. The sanctions were one cause of economic retardation, but they were not the only cause. There are structural problems in the Iranian economy; it needs wholesale reform.

Q: Why has the government been slow to address this problem?

Handjani: The government has been trying to address the problem, but a lot of the hardline factions in the government have blocked President Rouhani’s reforms. That is number one.

Number two, addressing it would be painful. It would mean cutting subsidies and stopping cash handouts. Iranians with lower incomes are used to these types of subsidies.

Q: Iranian Supreme Leader Ali Khamenei has blamed Iran’s “enemies” for the protests, while President Rouhani has called the protests “an opportunity, not a threat.” What is the significance of this divergence of views?

Handjani: There is always this belief that any kind of unrest in Iran is sparked by the outside; that the United States, Saudi Arabia, and Israel are colluding to destabilize Iran.

President Rouhani believes that the people have a right to protest, that the government has to be receptive to their grievances and be answerable to them. At the same time, when the protests descend into vandalism and destruction of public and private property, President Rouhani, as any leader would do, must speak out and respond forcefully. If he does not do that he would lose legitimacy in the eyes of the political elites and many in his base.

The supreme leader tends to view any threat to stability and the regime as being instigated by outside forces. He prefers grievances of the populace to be handled through their representatives in parliament and city legislatures. He tends not to publicly acknowledge the grievances of protesters as Rouhani has done, and prefers the political system address them behind closed doors.

Q: Do you expect the protests to ease pressure on reformists in government who have sought to do more but have been stymied by the hardliners?

Handjani: It depends on how Rouhani plays it. It could strengthen his mandate if he is able to get the hardliners to back down and start implementing reforms and, over time, these reforms bear fruit.

If he is unable to push the reforms through and just cracks down on the protesters while not answering their calls for economic equality, then you could have more protests.

Q: What is the dynamic between the supreme leader and the president?

Q: What are the supreme leader’s powers?

Handjani: He has veto rights on everything—foreign as well as domestic policy.

Q: How has the government responded to the protests so far?

Handjani: They are on their back foot. There have been crackdowns and there have been deaths. In the last couple of days you have seen a much more forceful response.

Q: Why is it significant that the protests are occurring in smaller cities?

Handjani: The rural poor have always experienced the hardship of sanctions and the hardship of economic turmoil, never the benefits of a properly managed economy. They have fallen further and further behind every year. Whereas in the urban areas the standard of living has improved somewhat, in the villages it has not.

Q: Is it significant that the protest lacks national leaders?

Handjani: Very much so. For a protest to galvanize you need leadership. This does not seem to have that, which is why it is scattered and does not seem to be well organized. For now, it seems like a lot of people venting about all sorts of problems—it is not a unified message.

Q: How are these protests different from the Green Revolution of 2009?

Handjani: [The Green Revolution] had an identifiable leadership, the protesters rallied around an election that they viewed to be fraudulent. They had a very clear set of goals.

Q: Where do you see things going next?

Handjani: I see a pretty hard crackdown happening if protests intensify. If Rouhani plays this right, he could push through not just economic reforms, but also social reforms that Iran really needs. People want less intervention in their private lives and they want more social freedom. In many ways these protests are a warning shot as to what could happen if the political elites in Iran don’t self-correct.

Q: Trump has taken to Twitter to say that he is watching the protests in Iran very closely. How should the United States approach the developments in Iran?

Handjani: Trump does not have credibility in Iran. With his travel ban, Trump has torn a lot of Iranian families apart; he has decertified the nuclear deal, which has left many Iranians scratching their heads; he has put himself on the side of Saudi Arabia, which says all the problems in the Middle East are Iran’s fault. The less he says about the situation in Iran, the better.

When foreign leaders start championing your cause, some in Iran label you as a foreign agent. Trump speaking out can discredit the protesters. It plays into the hands of the hardliners.

Image: Anti-government protesters are seen in Tehran, Iran, on December 30 in this still image from a video obtained by Reuters.