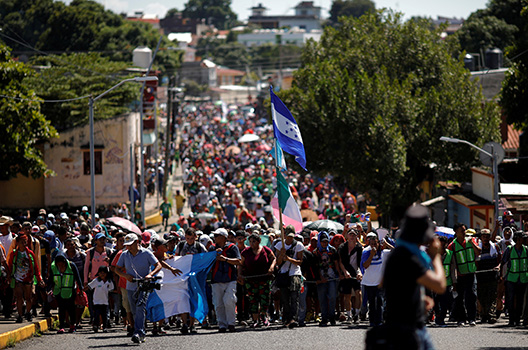 Central American migrants, who are part of a caravan of migrants trying to reach the United States, walk on a street as they continue their journey in Tapachula, Mexico October 22, 2018 (REUTERS/Ueslei Marcelino/File Photo)

Now is not the time for the United States to shun Central America. Instead, the United States should double down on engagement with Central America’s Northern Triangle countries (Guatemala, El Salvador, and Honduras) to address the violence, poverty, and endemic corruption that are pushing people to leave. Engagement is, after all, in the best interest of US national security.

On October 12, a group of less than 200 people organized in San Pedro Sula, in northern Honduras, to begin a treacherous journey toward the United States. By October 24, the caravan had grown to nearly 7,000 people—the largest the region has ever seen—and had reached forty-five miles into southern Mexico.

Less than two weeks before the November 6 midterm elections, Trump has honed in on the Central American caravan. On Twitter, he has threatened to cut aid to the region, close the US border, and deploy the military. Adding to the noise around the issue, he made unsubstantiated claims that the caravan consisted of Middle Easterners and MS-13 gang members.

In May 2017, the Atlantic Council’s Adrienne Arsht Latin America Center sought to move the needle toward increased US engagement with the Northern Triangle in an effort to build a better future for Guatemalans, Salvadorans, and Hondurans. The Northern Triangle Security and Economic Opportunity Task Force mobilized US policymakers and in-country leaders to push toward cooperation around the top issues for long-term regional prosperity: sustainable economic development, rule of law, and security.

Today, the Northern Triangle Task Force is a reminder that the future of the United States is tied to the stability and prosperity of Guatemala, El Salvador, and Honduras. Its findings should continue to serve as a blueprint for a multiyear, bipartisan, on-the-ground approach that would strengthen US national security by way of stabilizing and strengthening these three countries.

Here are the key recommendations from the report, for both the United States and the Northern Triangle: