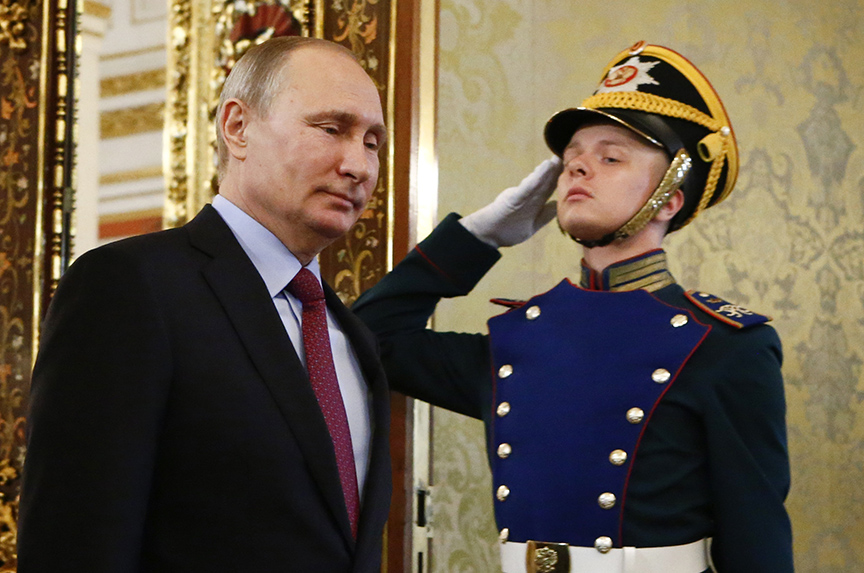 Three-and-a-half years ago, Russia illegally annexed Crimea and launched its campaign to destabilize eastern Ukraine. Russian aggression prompted the biggest increase in NATO’s collective defense capabilities since the Cold War—including the historic deployment in June of four multinational battlegroups in the three Baltic States and Poland.

But deterring military aggression is only half the battle. Russia has also engaged in political aggression against our societies, using cyberattacks, disinformation, propaganda, and influence operations (what the Soviets called “active measures”) to affect the outcome of elections and to undermine confidence in our democratic institutions.

In essence, using largely non-military means, Russia is trying to undo decades of progress toward a more stable and integrated Euro-Atlantic community.  It wants to turn back the clock to a time when Russia dominated neighboring countries through force and coercion. Using cyberattacks, disinformation, economic warfare and “active measures,” it aims to weaken and divide NATO and the European Union (EU), which it sees as the main obstacles to its expanded power in Europe, and to reduce their attractiveness to other European nations. It openly works to destabilize countries that seek closer ties to the Euro-Atlantic community, as we are seeing in the Western Balkans, even sponsoring an armed coup d’état in Montenegro last year to derail its accession to NATO. All of this is driven by a determination to preserve the Putin regime’s grip on power by discrediting any Western-oriented alternative and distracting the public from Russia’s economic decline.

Our strategy for meeting the Russian challenge must begin with, but go beyond, bolstering our defense and deterrence against potential Russian military threats. We also need to support Russia’s neighbors in their efforts to build strong, resilient societies and defend their sovereignty.  We must counter the Russians’ revisionist, anti-Western propaganda and other forms of “hybrid” warfare aimed at undermining our democracies.  And we must go on the counterattack:  using old and new technologies to project the Western narrative to Russian audiences; and supporting the aspirations of the Russian people for freedom and democracy over the longer term. In all these lines of effort, we have a greater chance of success by working closely with our European allies and partners.

Russian interference in the US presidential election last year and its similar efforts to influence the outcome of European elections this year call for a strong response at the national level, but there is a role for NATO and the EU as well, building on the joint declaration by NATO and EU leaders issued in Warsaw last year.

Nationally, we need to ensure the integrity of our election processes and institutions against cyberattacks and foreign manipulation; we should devote additional resources to detecting and analyzing Russian propaganda and influence operations; we should work with social media platforms to label or take down false stories before they go viral; and we should expand radio, television, and Internet broadcasting aimed at debunking disinformation and fake news. We shouldn’t fight propaganda with propaganda, however, but project a positive narrative, one that conveys what the West stands for, to our own publics and to Russian-speaking audiences.

Multilaterally, we should urge our NATO allies to support a bigger Alliance role in countering influence operations, disinformation and “active measures” by Russia.  These are not traditionally problems within NATO’s mandate, but defending our societies is just as important as defending our borders. Collaboration between NATO and the EU would make sense—in countering propaganda and disinformation, in sharing intelligence about cyber and other asymmetric threats, and in conducting joint exercises to ensure that “little green men” are not able to do to our countries what they did to Ukraine.

Alexander “Sandy” Vershbow is a distinguished fellow at the Atlantic Council’s Brent Scowcroft Center on International Security. He was the deputy secretary general of NATO from February 2012 to October 2016. You can follow him on Twitter @ARVershbow.

Image: Russian President Vladimir Putin walked past an honor guard before a meeting with his Brazilian counterpart, Michel Temer, at the Kremlin in Moscow, Russia, on June 21. (Reuters/Sergei Karpukhin)