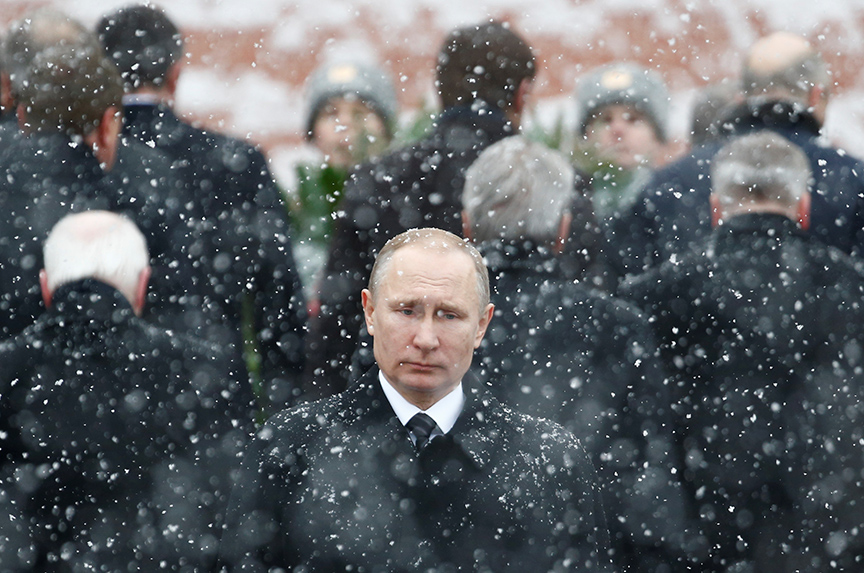 Vladimir Putin, who has ruled Russia for the past eighteen years, is set to rule for another six. It is almost predictable how he will act over the course of his next term in office.

Putin has constructed a regime based on personal authoritarianism. This regime does not depend on ideology, party or family, but on Putin himself. Therefore, we should expect that Putin will abolish the current presidential term limits enshrined in the Russian constitution, just as Chinese President Xi Jinping recently did in China. The best time for him to act would be soon after his expected re-election on March 18. This means that we should not expect political liberalization or judicial reform in Russia anytime soon.

Putin rules Russia with the help of the FSB, the country’s principal security agency, and will continue to do so. Over the years, he has sought to rejuvenate his cadres and this is likely to continue.

The Russian president’s future economic policies are equally predictable. Nothing is going to change. Macroeconomic policy will remain conservative and highly cautious because Putin does not want to risk financial instability that could lead to political instability.

In his State of Russia speech on March 1, Putin did not even mention the word “reform,” making it clear that we should not expect any real market reform, but instead more monopolization and renationalization. The reason for this is that any reform would undermine Putin’s kleptocracy, which is the basis of his political control.

Similarly, Putin will stick to his strategy of increasing protectionism. This means that Russia’s economic growth is likely to stay at a miserably low level of 1.5 percent.

The area that is least predictable is foreign policy. Since his Munich speech in 2007, Putin has become ever more aggressive in his anti-Americanism. His March 1 speech reached a new height of anti-Americanism as he discussed Russia’s nuclear and missile capabilities. The question is: what can Putin actually do?

Putin’s foreign policy is not really revanchist, but rather national mobilization in the absence of rising living standards. At the same time, Putin recognizes the financial constraints that he faces. Russia’s military expenditures are less than one-tenth of the United States’. Therefore, we should not expect any direct Russian attack on NATO, but anything else.

Russia’s current military strategy is focused on hybrid warfare. Since its cyber attack on Estonia in 2007, the Kremlin has used cyberattacks on an ever-greater scale making the West look increasingly helpless. Russia has continued to use gas and trade to wage energy and economic warfare; disinformation is an old favorite. The greatest threat, however, is probably the weaponization of corruption, for example, by buying leading politicians.

Russia’s imaginative foreign policy was on display in the attempted assassination of a former Russian spy and his daughter using a military grade nerve agent in the English city of Salisbury on March 4. By using a unique Russian nerve agent, the Kremlin made clear who was responsible. That Russia violated a couple of United Nations’ conventions made the attack look even more daring. The United Kingdom accused Russia of the poisoning but came up with a timid response.

The daring Russian attack and the weak British response have boosted Russian nationalism ahead of the March 18 vote. This will only help Putin. In addition, the Kremlin managed to split the West in its response to the poisoning. Only a few Western nations rallied to the UK’s side. Russian émigrés, too, have been intimidated and are less keen on engaging with the political opposition in Russia.

Given that the Kremlin’s occupants appear to hold their personal assets on a large scale in anonymous companies in the United Kingdom and the United States, the most effective response to Russian aggression would be if these two countries prohibit anonymous companies as many European countries have done. One can only hope that the West finally realizes what Putin is up to and establishes its own asymmetric defense.

Anders Åslund is a resident senior fellow in the Atlantic Council’s Eurasia Center. Follow him on Twitter @anders_aslund.

Image: Russian President Vladimir Putin has ruled Russia since 2000. He is widely expected to be re-elected on March 18. (Reuters/Sergei Karpukhin)