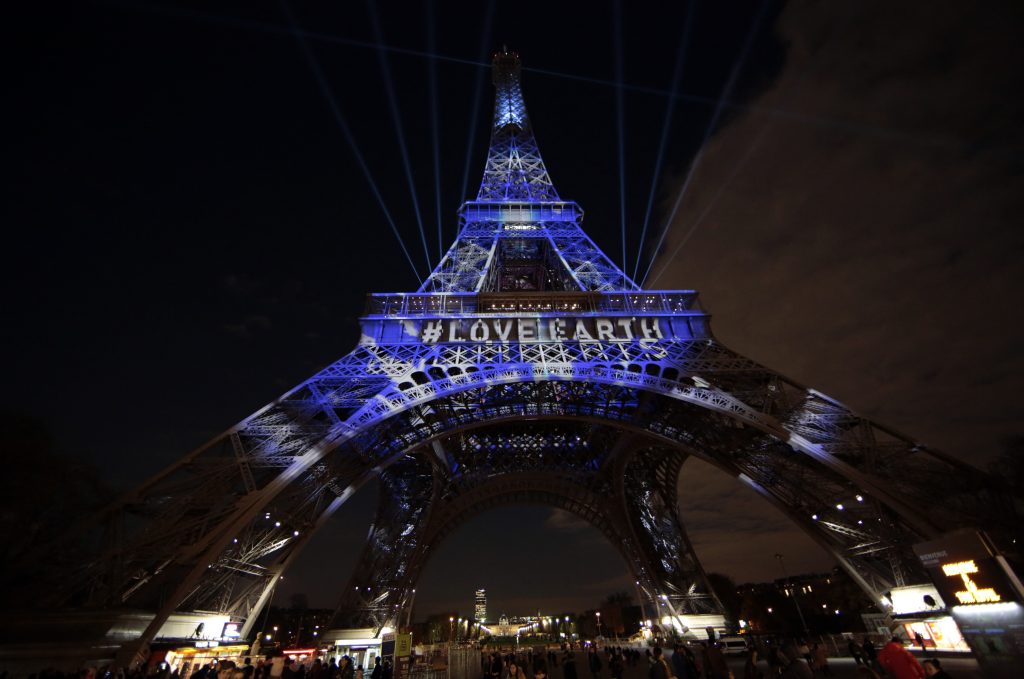 The Eiffel Tower is lit up with blue lights to mark the United Nations Conference on Climate Change (COP21) in Paris, France, on Dec. 2. (Reuters/Eric Gaillard)

Officials from one hundred and ninety-six governments are gathered in Paris with the goal of reaching the first-ever global climate change agreement.

The negotiators’ main objective is to agree on legally binding reductions in greenhouse gas emissions intended to keep the global average temperatures below a 2° Celsius increase over pre-industrial levels.

Heather Zichal, a Senior Fellow at the Atlantic Council’s Global Energy Center and former advisor to US President Barack Obama on energy and climate change, discussed the expectations from the COP21 summit in an e-mail interview with the New Atlanticist’s Ashish Kumar Sen. Here are excerpts from our interview.

Q: We’ve had UN climate conferences in the past. Why is COP21 significant?

Zichal: One key area of significance we can expect from any agreement coming out of Paris, as compared to previous climate talks, is that developed and developing nations alike will have committed to emissions targets and other measures that reduce their respective contributions to global climate change. Already several developing nations, with encouragement from the United States and its own commitments, have submitted significant Intended Nationally Determined Contributions (INDCs) ahead of the Paris talks.

In recent weeks, in fact, China, the world’s biggest carbon pollution emitter, has reiterated the commitment it made in June to a peak in its emissions by 2030, an increase in the share of non-fossil fuels in its energy mix by about 20 percent by 2030, and a reduction in carbon dioxide emissions per unit of GDP by 60-65 percent by 2030, from 2005 levels. It has also committed to a national cap and trade system. India, Brazil, Mexico, and other developing nations have also made significant INDCs ahead of Paris, ensuring that developing and developed nations alike will be walking together down the same path towards a global climate solution, and in so doing, will be taking a key argument away from those opposed to a global climate agreement.

Q: Developing nations like India contend that they should receive billions of dollars to make the transition to clean energy. To what extent does the success of COP21 hinge on climate finance, and more specifically on the Green Climate Fund meeting its goals?

Zichal: Climate finance has a long bipartisan history, having been supported by the George W. Bush administration, and there is support from thirty countries, including every major developed country in the world and many developing countries, which have contributed to the Green Climate Fund.  So, whether or not an agreement in Paris hinges on it, it is a sensible and responsible way to help all countries prepare for the impacts of climate change.  For the United States’ part, the Green Climate Fund request is just one hundredth of one percent of our annual budget — but the contribution will play a significant role in the success of global climate action.

Q: Is it important for the pledges made by countries to cut emissions to be binding? If yes, why?

Zichal: This is an important question and at a minimum we should have a process of review and transparency that is binding, whereby we can monitor and ensure that progress is being made toward targets agreed to in Paris by all 200 of the developed and developing nations at the negotiating table. That is to say, it’s far more important that all nations are accountable and that there is a binding process for keeping track of a nation’s progress so that they are able to be held accountable.

Q: Some leaders have suggested putting a price on carbon emissions — carbon pricing. Is this a viable suggestion, especially in the US where a Republican-controlled Congress is unlikely to support it?

Zichal: It can be and the President has already said in Paris this week that a price on carbon is likely “the most elegant way” to reduce dangerous carbon pollution, but he did so while conceding there are obvious and significant political limitations to that approach here in the United States in the near term. However, keep in mind that pricing and rate-based approaches are an option for states in the United States implementing and complying with the finalized EPA Clean Power Plan. They do have the ability, and many states may exercise the option of, pricing carbon and trading credits regionally to achieve necessary carbon pollution reduction targets.

Globally I think we’re going to see a variety of policy approaches to help countries meet their emissions targets. We’ve already seen cap and trade, aggressive renewables commitments, phase-out of existing coal plants, and more as a means of compliance. There’s no one-size-fits-all policy. The important thing is that these commitments are being embraced internationally and together we will find global solutions.

Q: Why is it necessary to keep the global average temperature rise below 2° Celsius?

Zichal: 2° C is the so-called tipping point, the point beyond which we can’t avoid the most catastrophic impacts of climate change.

To be clear though, in and of itself, we are not likely to see an agreement coming out of Paris alone that will cap temperatures below 2° C and we should manage expectations so that perfect doesn’t become the enemy of good. What this agreement will do, however, is to create new certainty, incentives and market signals for innovation from private industry, cities and other sub-national bodies.  It should drive adoption of measures and actions at the regional and local level that can augment targets agreed to in Paris to help avoid the worst impacts of climate change. In fact, there are already commitments being made by major businesses and business leaders like Bill Gates to augment proposed national commitments.  Such private and other non-national government efforts and clean energy investments can certainly, in aggregate, enhance whatever international commitments are made by nations in Paris.

Q: What to you will be a successful outcome of COP21?

Zichal: COP21 will be a success in my mind if it puts in place a good foundation, agreed upon by developed and developing nations alike, upon which we can create further collective and innovative actions by both governmental and private bodies in the future that limit climate change. It should be a new baseline for future progress, and certainly significant progress.

However, while the talks in Paris are likely to culminate in a significant agreement, we should remember that global climate change negotiations have long been an incremental process and the Paris talks are not likely to be far different in that regard. From Kyoto, to Bali, to Copenhagen, to Cancun and now Paris, U.N. climate talks have always provided a foundation for new global progress and progress to come. No single agreement has ever been nor should it have been expected to be the final solution to the climate crisis. It is through that prism that we should examine Paris and our expectations of outcomes from the talks. I’m optimistic that COP21 can put us on the path towards a low carbon future.