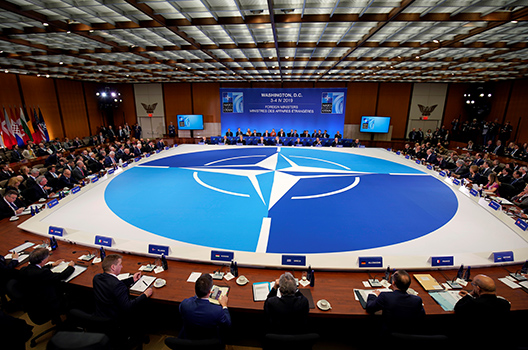 NATO is being celebrated in Washington this week. The Alliance, which turned seventy on April 4, is marking its anniversary in the very town it was born.

NATO Secretary General Jens Stoltenberg made history by becoming the first leader of the Alliance to address a joint meeting of the US Congress on April 3. He was treated like a rock star on Capitol Hill where lawmakers on both sides of the aisle showed their support for the Alliance. “The secretary general of NATO had so many standing ovations, I thought it was an aerobics class,” joked Atlantic Council President and Chief Executive Officer Frederick Kempe.

On April 4, US Secretary of State Mike Pompeo is hosting foreign ministers from the NATO member states for substantive discussions on how to strength the Alliance for the future. A little bit of history is being made at these meetings as well — the foreign minister of the Republic of North Macedonia is, for the first time, participating as an observer after his nation settled a twenty-seven-year name dispute with Greece paving the way for North Macedonia’s accession to NATO.

On April 3, the Atlantic Council, the German Marshall Fund, and the Munich Security Conference celebrated NATO’s anniversary with NATO Engages — a daylong conference that featured leaders from the Alliance.

Be sure to check out the New Atlanticist for full coverage of NATO Engages, including speeches by US Vice President Mike Pence, German Foreign Minister Heiko Maas, Turkish Foreign Minister Mevlüt Çavuşoğlu; a discussion with Stoltenberg; and a bipartisan panel of top congressional supporters of the Alliance.

To add further to your reading list, we compiled some of the must-reads from NATO’s birthday week:

Why We Stand With NATO: US Sen. Tim Kaine (D-VA) and Cory Gardner (R-CO) explain in the Atlantic why they are fighting to protect the United States’ commitment to NATO. While they concede that there are real disagreements between NATO allies, they argue that “we must seek to resolve these differences within the Alliance, not outside of it.”

Does the US Need NATO?: Atlantic Council Board Director and former US Ambassador to NATO R. Nicholas Burns explains how the transatlantic alliance makes the United States stronger. Read his step-by-step guide for Quartz on what NATO provides to the United States.

NATO at 70: What’s Next?: Politico asked some of Washington’s top NATO experts what they think the Alliance will look like in ten years. Atlantic Council Distinguished Fellow and former Deputy Secretary General of NATO Alexander Vershbow says he wants to see “the Alliance become a more genuinely balanced partnership between the United States and Europe.”

Why NATO is Essential For World Peace, According to Its Former Commander: The 16th Supreme Allied Commander of NATO and Atlantic Council Board Director, James Stavridis, argues in Time that NATO is not just good for Europe and the United States, but also for the entire world. “A strong NATO means not only having allies in a fight, should it come to that,” he writes, “but also a powerful deterrent to the aggression of ambitious adversaries.”

Germans Must Start Taking Defense Spending Seriously: Brookings Institution Robert Bosch Senior Fellow Constanze Stelzenmüller takes a stab on writing a speech for German Chancellor Angela Merkel to push her country to spend more on defense. Stelzenmüller also took part in a panel at NATO Engages where she pushed back on Pence’s criticism of Berlin, arguing that “it is unfair to say that we’re not doing anything. We have hugely increased the German defense spending in the past years.”

What’s the Secret of NATO’s Long Life? It’s Not Just a Military Pact: Former UK Ambassador to France Peter Ricketts writes in the Guardian that the secret to NATO’s longevity is that “it is not just a military pact, but an alliance of shared values.”

NATO at Seventy: Filling NATO’s Critical Defense Capability Gaps: As NATO moves past its seventieth birthday, Atlantic Council Nonresident Senior Fellow Wayne A. Schroeder offers a comprehensive menu of options for the Alliance to shape its investments in critical areas and ensure that NATO retains its fighting mindset.

Seven Decades of NATO: James M. Lindsay, Corey Cooper, and Elizabeth Lordi from the Council on Foreign Relations walk you through the seventy-year history of the transatlantic alliance with gripping videos and pictures from NATO’s past.

Image: US Secretary of State Mike Pompeo speaks at a meeting of the North Atlantic Treaty Organization (NATO) Foreign Ministers at the State Department in Washington, U.S., April 4, 2019. (REUTERS/Joshua Roberts)