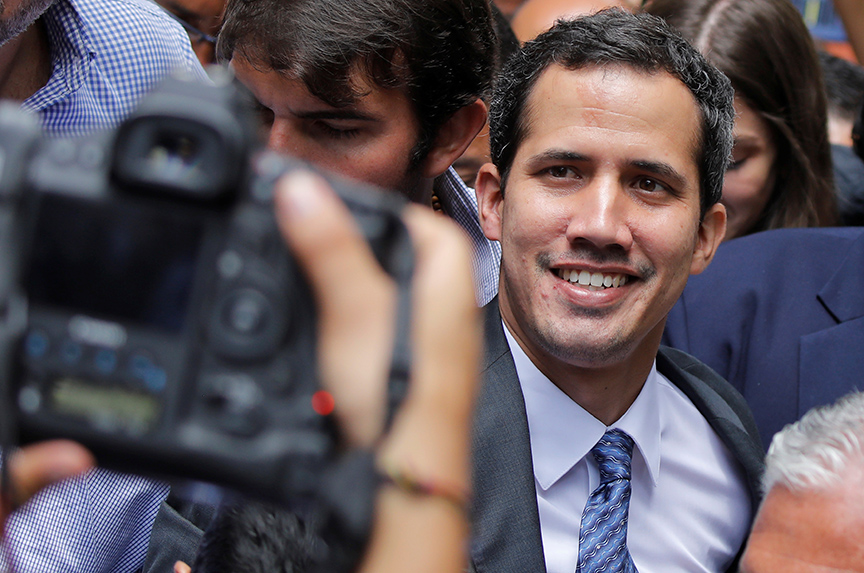 US President Donald J. Trump’s recognition of Juan Guaidó as interim president of Venezuela ramps up pressure on Nicolás Maduro’s regime in Caracas. The recognition is an important step, but also raises many questions.

Jason Marczak, director of the Atlantic Council’s Adrienne Arsht Latin America Center, addressed some of these questions in an interview with the New Atlanticist’s Ashish Kumar Sen. Here are excerpts from our interview.

Q: The Trump administration’s decision on Venezuela is a departure from its America First and non-interventionist policies. What prompted the US decision to get involved in Venezuela?

Marczak: The Trump administration’s decision is a departure from the unilateralist position often take in global affairs, but it is consistent with the administration’s policies of not intervening in Venezuela. The events of this week were home-grown. What has transpired is a decision by Juan Guaidó, given his role as National Assembly president, to assume the presidency of the country on an interim basis given the widespread recognition that Nicolás Maduro no longer legitimately holds the office of the president. According to Article 233 of the Venezuelan Constitution, the president of the National Assembly has the ability to serve as interim president and to call elections when the office of the president becomes vacant.

The change in leadership is Venezuelan-driven but requires key support from the international community, including the United States.

How did we get here? We are at this point because last May Venezuela held presidential elections. Those elections were widely condemned by the international community as illegitimate and fraudulent for a number of reasons. Opposition parties’ candidates were barred from competing, there were no international observers, the national electoral council was stacked full of Maduro supporters, and there were coercion points set up at polling stations, among other things.

When Maduro assumed this second term on January 10 that day marked the beginning of what was seen by many as an illegitimate term because it was fraudulently secured. That prompted the National Assembly, the only democratically elected body in Venezuela that has had all its powers stripped by the Maduro regime, to declare that the office of the president is now officially vacant because the person who is claiming that office was not actually democratically elected.

Q: What are the practical implications of the US recognition of Juan Guaidó as interim president of Venezuela?

Marczak: US recognition means a couple of things. The US diplomatic relationship will now be with the interim president and his leadership. It also means that Venezuelan state assets abroad, including those in the United States, should transition to the newly recognized government.

At the same time, you now have in Caracas Juan Guaidó who is recognized as the interim president by a growing number of countries around the world as well as Nicólas Maduro who is still recognized as president by Russia, China, Turkey, among others. A divide exists among global powers. That has the potential to play out in a very damaging way inside Venezuela.

Marczak: Maduro has a propensity to ramp up repression and violence at moments when he feels threatened; this is one of those potential moments. There is also the possibility that the security forces will arrest Guaidó and other members of the National Assembly leadership. That would have domestic as well as international implications.

Q: Military support is key to the longevity of the Maduro regime. Are there signs that the military is willing to break with Maduro and throw its support behind Guaidó?

Marczak: That’s the big question. The generals, the top brass, have made statements over the last two days supportive of Maduro. Those statements are not necessarily reflective of the soldiers on the ground.

The United States has pledged $20 million in humanitarian support. Other countries will certainly follow. The question is what will soldiers do when they see Option A: stick on with Maduro, repress Venezuelans, and incite violence or Option B: side with the Guaidó government which can attract a huge influx of humanitarian assistance for them and their families. That could potentially change the calculus in some people’s minds.

Q: In what way does this shift the calculus for Maduro?

Marczak: All the rallies in support of Guaidó, the anti-Maduro rallies, are threats to Maduro and his apparatus. While Guaidó doesn’t control the military, he does have the unique ability to rally people. He controls the street.

Q: If the military shifts away from Maduro, is there a danger that the United States could find itself in the position of backing a military coup?

Marczak: There is no coup. There is a constitutionally recognized change of government. All except for one of the major democracies across the Americas have recognized this change. The key question is going to be where does the military side and are there fissures in the military.

Q: US officials have talked of a “host of options.” What are some likely options?

Marczak: For the United States there are a couple of key priorities. First, to foster increased international recognition and legitimacy of the Guaidó government as the interim president of the country. And, along with that, to provide immediate humanitarian relief to stem the suffering of the Venezuelan people and stem the flow of migrants and refugees fleeing the country.

While a US priority is to empower Juan Guaidó as the leader of the country, it is critical to continue to do so in a collaborative way with Latin American countries and other democracies. For historical reasons, as well as internal dynamics within Venezuela, the United States has not been driving this effort internationally. The transition that we’re seeing in Venezuela is one which has been brewing for years and one which the Lima Group of Latin American countries has been pushing for in the region. The US role has been to apply calculated, tactical sanctions on some individuals in the Venezuelan regime because the United States has the power to impose sanctions that can inflict pressure on the regime. What has been key is the leadership of countries throughout the region. This is not a US-led effort. This is an effort led first by the Venezuelan people and the National Assembly, and second by the region itself.

Q: The Trump administration has also pledged $20 million in humanitarian assistance. What is the significance?

Marczak: The US pledge of humanitarian assistance is an immediate direct win for the new government to show the Venezuelan people that change is possible and that their lives can be improved.

The international community’s role in Venezuela has been to be supportive of a democratic transition. Now with a new interim government that calculation has changed. Now the role of countries like the United States and others is to help that government consolidate itself and as part of that to give the support needed to provide critical humanitarian assistance.

Q: While on one hand you have the United States among the countries that have offered recognition to Guaidó, on the other you have Russia, China, Turkey, and Cuba pledging their support to Maduro. What are the international repercussions of the development?

Marczak: Venezuela is not an issue in isolation. There are broader geopolitical interests at play. Russia sent bombers to Venezuela in December; Russian influence in Venezuela has grown dramatically; Rosneft, the Russian oil company, has amassed significant interests in Venezuela. The close relationship between [Russian President Vladimir] Putin and Maduro gives Russia a strong foothold in the Americas.

There is also the Chinese relationship with Venezuela. The Chinese have loaned the Venezuelans over $60 billion. The Chinese want to be paid back, not just financially, but also the oil that they’re owed.

Turkish President [Recep Tayyip] Erdogan called Maduro and pledged his support. Why? Venezuelan gold exports to Turkey have increased in exponential fashion over the course of the last year giving Turkey new gold resources that they are deeply craving.

As the interests of countries like Turkey, Russia, and China are potentially threatened because of a change of leadership there is the potential of those countries—particularly Russia—trying to play a spoiler role internally within Venezuela.

Image: Juan Guaidó arrived for a news conference in Caracas, Venezuela, on January 25. The United States on January 23 recognized Guaidó as the interim president of Venezuela. (Reuters/Carlos Barria)