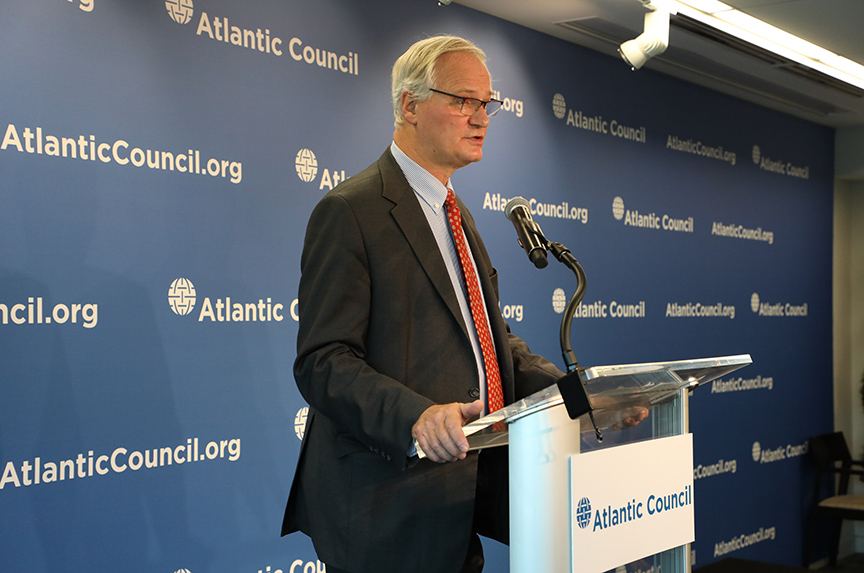 The United States and the European Union (EU) must deepen their engagement with the Western Balkans, a region where Russia, Turkey, and wealthy Arab Gulf states have extended their influence and that is considered integral to realizing the idea of a Europe that is whole, free, and at peace, speakers and panelists said at the Atlantic Council on November 29.

One European official described the United States as an invaluable partner in realizing the vision of a whole and free Europe, while a US official affirmed the commitment of US President Donald J. Trump’s administration to the Western Balkans.

The speakers participated in a daylong conference hosted by the Atlantic Council—“A Coming Storm? Shaping a Balkan Future in an Era of Uncertainty”—in Washington. Serbia, Bosnia and Herzegovina, Montenegro, Kosovo, Macedonia, and Albania together make up the Western Balkans.

Russia has found an easy entrée into the Western Balkans as a result of democratic backsliding, corruption, and resentment toward the West in the region.

Noting that the overarching trends in the Western Balkans are toward “decay or stagnation of democratic institutions,” Dimitar Bechev, a research fellow at the Center for Slavic, Eurasian, and East European Studies at University of North Carolina, Chapel Hill, said this has created fertile ground for countries like Russia to expand their influence without expending large amounts of resources.

In his opening remarks, Frederick Kempe, president and chief executive officer of the Atlantic Council, acknowledged that the region is in flux, but said the Western Balkans offer “a chance and a place where Europe can be completed.”

“At the [Atlantic] Council, we strongly believe that against a backdrop of change and uncertainty, the United States, the European Union, and the Western Balkans face a real opportunity,” he said. “Get it right and we can lead in creating a safe, secure, and prosperous Western Balkans firmly embedded in the West. Get it wrong and our ambivalence today may engender a crisis tomorrow.”

Damon Wilson, executive vice president for programs and strategy at the Atlantic Council, struck a similar tone, warning that “ambivalence today could breed a crisis tomorrow.”

Wilson said a period of US disengagement from the Western Balkans had already created challenges in the region, specifically an attempted coup in Montenegro, political paralysis in Bosnia-Herzegovina, and an internal crisis in Macedonia. However, he added, “with a little bit of attention and effort, a little bit of strategy, there is an opportunity.”

He contended that the pillars of the idea of a Europe whole, free, and at peace—forging a strategic partnership with Russia, former adversaries becoming allies for the process of NATO enlargement, and deepening of the EU—had “hit a pretty significant roadblock.”

Wilson said that while it is important for the EU to take the lead role on integrating the Western Balkans into the Union, the United States must play a critical supportive role. Furthermore, he suggested the need to establish a permanent security presence in southeastern Europe; to reconcile with Serbia, a country where NATO is highly unpopular after its 1999 bombing campaign to drive Serbian forces out of Kosovo; and to deepen US engagement with the Balkans.

US role in the region

Even as it poses major challenges to its primary partners in Europe, the Trump administration has shown a willingness to prioritize its relationship with the Balkans.

On a visit to the region in August, US Vice President Mike Pence told the leaders of eight Balkan nations “the future of the Western Balkans is in the West.”

Speaking at the Atlantic Council, Molly Montgomery, Pence’s special adviser for Europe and Russia, said the United States is “not prepared to leave a vacuum in the Western Balkans.”

Christian Leffler, deputy secretary general for economic and global issues at the European External Action Service, declared that for the EU there is “no more important partner” than the United States in realizing the vision of a Europe that is whole, free, and at peace. US commitment to securing that vision is not motivated by altruism, he said, rather by the fact that such an outcome is also in the United States’ interests.

Wilson, acknowledging that the Trump administration has created a challenge for Europe and that the EU is focused on its own future in the wake of the United Kingdom’s vote to leave the Union, said there is an opportunity to forge a common strategy when it comes to the Western Balkans. However, doing so may require accepting that there “might be a bankrupt model on the ground—this nexus of corruption, politics, and crime,” he said.

Freedom House’s Nations in Transit project has noted democratic backsliding—specifically a deterioration in the quality of governance—in the Balkans. The attack by hundreds of protesters on Macedonia’s parliament in Skopje in April of 2017 provided proof of why Macedonia has led this downward trend in the region.

Affirming the importance of rule of law in order for the Western Balkans to realize its Euro-Atlantic ambitions, Leffler said this goes “to the heart of what the European Union is about.”

He expressed “considerable concern” over developments in the Western Balkans, including the arrest and subsequent release of a number of members of parliament in Skopje in November.

Damir Marusic, executive editor of the American Interest, said the issues that have affected the Balkans since the 1990s—migration, corruption, the question of identity, and populism—are similar to the ones challenging the West today.

Russia, meanwhile, has sought to exploit this situation.

Russia’s annexation of Crimea and support for separatists in eastern Ukraine marked a watershed moment in its attitude toward NATO and EU enlargement, according to Bechev.

“After Ukraine, it became a zero-sum game,” he said. “The Russian thinking is: ‘You Europeans, Americans are meddling in our backyards in Georgia and Moldova, while we can do the same in the Balkans,’” he added.

Russia does not want to bring the Balkans into its fold, nor does it have the means to bankroll those governments, said Bechev, “they just want to obstruct the West.”

Serbia is an example of a country that has deepened its relationship with Russia.

Serbian Prime Minister Ana Brnabic said in an interview with the Financial Times that her country should not be forced to choose between Russia and the West. Serbia’s close relationship with Russia is not an obstacle to its EU membership aspirations, she said.

Molly McKew, president of Fianna Strategies, said the Russian strategy in the Balkans is to create a “black hole” in the middle of NATO and the EU. This strategy is pegged on exploiting the intelligence, information, and military space in the Balkans, she said. The West, on the other hand, has provided no compelling narrative to counter Russia’s presence, she added.

“The US is really absent from the region, and we have been for a long time,” McKew said, adding that while Pence’s visit to the region was significant, it is important for Trump to be personally engaged on this policy.

“Russia uses the empty space against us and we have been giving them an open battle space for way too long,” said McKew. “We need to have something in that space to stop them or we are going to find more black holes in all of our security architecture.”

The onus is on the region

Albania, Bosnia and Herzegovina, Kosovo, Macedonia, Montenegro, and Serbia all aspire to join the EU.

Bulgaria, which takes up the six-month rotating presidency of the EU in January, has said it would seek more infrastructure and energy projects to help bring the Western Balkan nations closer to the EU. To this end, it will host an EU-Western Balkans summit in May.

Montgomery said the Trump administration is committed to working “hand in glove” with its European partners to support Euro-Atlantic integration. “We think that this is a great opportunity for us to demonstrate the strength of the US-EU relationship and what we can achieve together if we coordinate our messages… goals… and tactics,” she said.

Montgomery said the “best way to inoculate ourselves against Russian malign influence” is for governments in the region to undertake reforms that will lead to good governance, fight corruption, and create economic opportunities.

It is, eventually, up to the leaders of the region to urgently take up this task, she said, adding: “It will require a lot of tough decisions and significant political will, but it is the only way to achieve both that resilience to malign influence, but also to progress down the European path that the countries of the region have set for themselves.”

Maintaining that the Western Balkans have an “obvious place” in the vision of a Europe whole, free, and at peace, he said that US support is important for the enlargement process, but ultimately it is up to the governments in the Western Balkans to realize this vision.

“We can help, we can support, we can encourage, we can even sometimes cajole, but we cannot design or realize that future for them,” he said.

Image: Christian Leffler, deputy secretary general for economic and global issues at the European External Action Service, declared that for the European Union there is “no more important partner” than the United States in realizing the vision of a Europe that is whole, free, and at peace. He spoke at a conference hosted by the Atlantic Council—“A Coming Storm? Shaping a Balkan Future in an Era of Uncertainty”—in Washington on November 29. (ImageLinkPhoto.com/Dennis Kan)