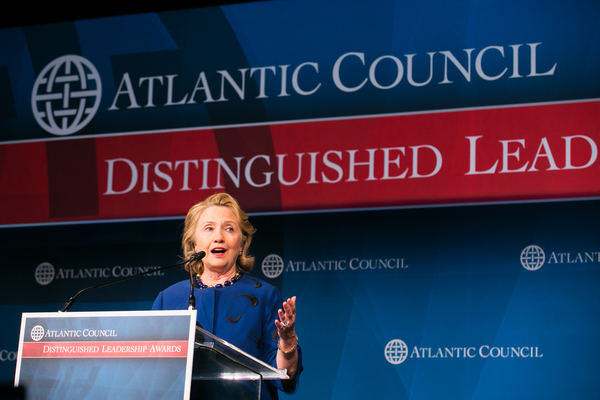 Former US Secretary of State Hillary Clinton declared that NATO is “just as important in the 21st century as it was in the 20th” and warned, “We can’t afford to let the greatest alliance in history slide into irrelevance.”

Speaking at the Atlantic Council’s awards dinner, where she was honored for distinguished international leadership, Clinton echoed former Secretary of Defense Bob Gates’ fear of “two-tiered Alliance,” noting that NATO has “a shrinking percentage of members willing—and able—to pay the price and bear the burdens of common defense.” She noted that the recent mission in Libya showed the size of the gap in action, noting especially Europe’s lack of independent ISR (intelligence, surveillance, and reconnaissance) capability. Additionally, she noted, “We saw that fewer than a third of NATO members participated in strike missions.” This, Clinton argued, points to both “economic and political deficits.”

Despite her concerns about the Alliance, Clinton remains bullish on the transatlantic partnership and believes passionately that America’s and Europe’s “security and prosperity remain intertwined.” She noted that she had made 38 visits to Europe as secretary of state.

Clinton argued that the relationship going forward must focus on three pillars: energy, trade, and readiness.

During her tenure at Foggy Bottom, she identified “Russia’s monopoly on energy” as “a key security issue.”  She helped launch the US-EU Energy Council to deepen transatlantic dialog and promoted alternative pipeline projects, which she believes will provide needed competition for Gazprom. Further, she believes that the move to American energy independence will contribute to European energy security.

Additionally, Clinton heartily endorsed the ongoing Transatlantic Trade and Investment Partnership, which she believes vital to strengthening the relationship of the world’s largest trade partnership and, more importantly, its values. She believes our “shared model” of free trade is “under pressure” from rising powers. In particularly, she’s concerned about “forced technology transfers,” intellectual property rights, and creating a level playing field.

On the security front, in addition to her comments on NATO, she argued that it was important that the transatlantic partners be “forward leaning on cyber vulnerability,” which she argues must be “a priority of not just government but also business.”

While the speech broke little new ground, it was nonetheless quite reassuring. Commitment to the transatlantic security and economic partnership has been part of a bipartisan consensus in the United States for more than seventy years, but there are signs that it’s wavering  Well justified frustrations on this side of the Pond over burden sharing, which themselves have been around for decades, are growing and, without the Cold War uniting us against a common threat, more likely to be acted upon. On Capitol Hill, in particular, many influential Members question NATO’s relevance. And the Obama administration’s poorly articulated “pivot to Asia” furthered the impression that the United States was downgrading its relationship with its European allies.

That Clinton in particular delivered this message is important. First, of course, she’s an incredibly important voice on international affairs. Second, as a private citizen, she’s freer than she was a secretary to be candid, so the endorsement is less pro forma. Third, she’s widely considered the frontrunner to be the 2016 Democratic presidential nominee, so this speech is a powerful signal as to her foreign policy platform. The combination of a baseline belief in our transatlantic partnership and a tough-minded assessment of where it stands, particularly on the security front, is an excellent foundation.