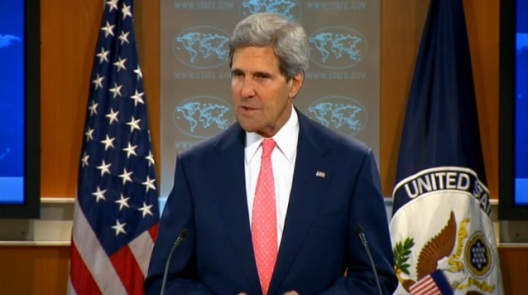 In a piece on MENASource, Fred Hof looks at Secretary of State Kerry’s recent statements about Syria.

The moral obscenity that is Syria is, in short, nothing new. What is new is that the head of the Assad-Makhluf clan, trying to preserve all or part of Syria as a family business, tried, for whatever reason, to humiliate the President of the United States and destroy his credibility, both in the region and beyond. That he believed he could get away with it seems, on the basis of Kerry’s statement, to have been a major and perhaps fatal miscalculation. And yet he may still get away with it.

Image: Secretary Kerry delivers a speech on the use of chemical weapons in Syria, Aug 26, 2013 (Photo: US Department of State)