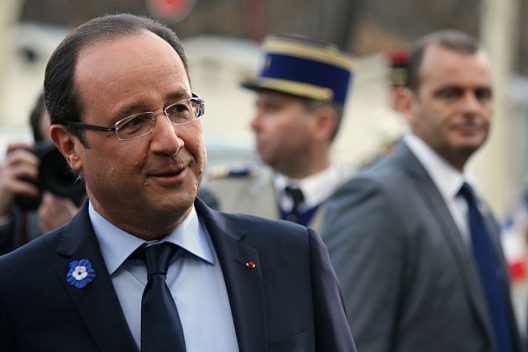 Earlier today, President François Hollande provided what many had been waiting for since his inauguration a year ago: a confident vision of the future and a clear idea of France’s place in it. It would be easy, but erroneous, to underestimate how big a difference this change of discourse can make.

Hollande had told his ministers they could have two weeks of vacation in the first half of August and they had to take it in France. In addition to mandating a very short summer break he also gave them a homework assignment: come back with a vision of France in 2025, just over a decade hence. Today Hollande got the government back to work with a ministerial seminar at the Elysée Palace on that subject.

His strategic watchwords were the maintenance of sovereignty, excellence and unity — the three biggest challenges for France in the future. He included in sovereignty not only diplomacy and national security but also the independence that goes with budget discipline, competitiveness, and leveraging La Francophonie. Excellence he described as including social welfare, environmental responsibility and national infrastructure that promotes economic growth. Unity he set as a goal opposed to individualism or a divided society of adversarial communities, promotion of mutual support among generations, and continuation of efforts against inequality and division.

Long gone was “I don’t like the rich” or talk of the seventy-five percent income tax. Today’s presentation was that of a leader wanting to move a whole country forward, not a politician looking to eke out a sectarian advantage. But it was good politics, too. Predictably, the right-wing opposition scoffed at this act of statesmanship, but in fact it was caught on the back foot as it has presented no program or vision of its own. Some of the contumely against Hollande’s plan was clever and entertaining, including portrayals of ministers feverishly working to complete their compositions on holiday, but the reality is that Hollande’s objectives, and how he intends to get there, are difficult to argue with.

In response to the three challenges, he set out a series of measures to meet those challenges over the next ten years:

At this point it starts to become obvious that Hollande had been doing some summer homework himself. He pledged that by the end of this month the government would propose the 2014 budget, including savings that need to be made and benefits that need to be trimmed; provide a view on how economic recovery will reduce unemployment; and offer a solution to maintaining the pay-as-you-go pension system (which will mean working longer, though it may not require a spike in the retirement age as such).

The Prime Minister, Jean-Marc Ayrault, said France needs self-confidence and that taking this ten-year view means facing today’s problems and figuring out how to solve them. Despite the opposition’s claim that this was all pie-in-the-sky, neither Hollande nor Ayrault seemed interested in grandstanding or theorizing. But they did give the impression of wanting to face the future with confidence and determination, not wage class war or just keep the lid on annoying issues that threaten to boil over, which had been the impression over the past year.

Hollande tasked the head of the Prime Minister’s Planning Office, Jean Pisani-Ferry — who was brought back from running the Bruegel think-tank he founded in Brussels to take over the government’s strategy unit last spring — with preparing by the end of this year a comprehensive strategic plan for France in 2025.

In the middle of August it would be too easy to miss the fact that this change of tone in fact marks a change of approach. Hollande has grasped the first signs of recovery as an opportunity to find confidence, a vision and a voice we had not seen evidence of before.

It will be essential to keep the momentum going, for the obstacles will be many, not least in the attitudes and reactions among the French people. Recent work at the Atlantic Council on French and US competitiveness has underscored that government is the preponderant actor in determining competitiveness, not only in country like France with a tradition of a strong state, but at least as much and perhaps even more in a country like the United States with so many disparate governments at so many levels. Coherent policy is the prerequisite of success. Beyond government itself, national success and competitiveness depend on a consensual and continuous dialogue between the public sector and the private sector on a multitude of issues. Hollande and Pisani-Ferry stressed there would be broad consultation in forming the strategic plan for 2025. It will be crucial  that that consultation remain non-polemical and focused on common objectives. National success and competitiveness depend, as well, perhaps more than on anything else, upon a culture and educational system that wants to win. Competitiveness starts at home and at school. Hollande’s confidence, vision and voice are a welcome development: his leadership challenge is to inspire those in the French people, especially in the younger generations who will inherit the future now being planned.

Nicholas Dungan is a senior fellow with the Atlantic Council’s Program on Transatlantic Relations.