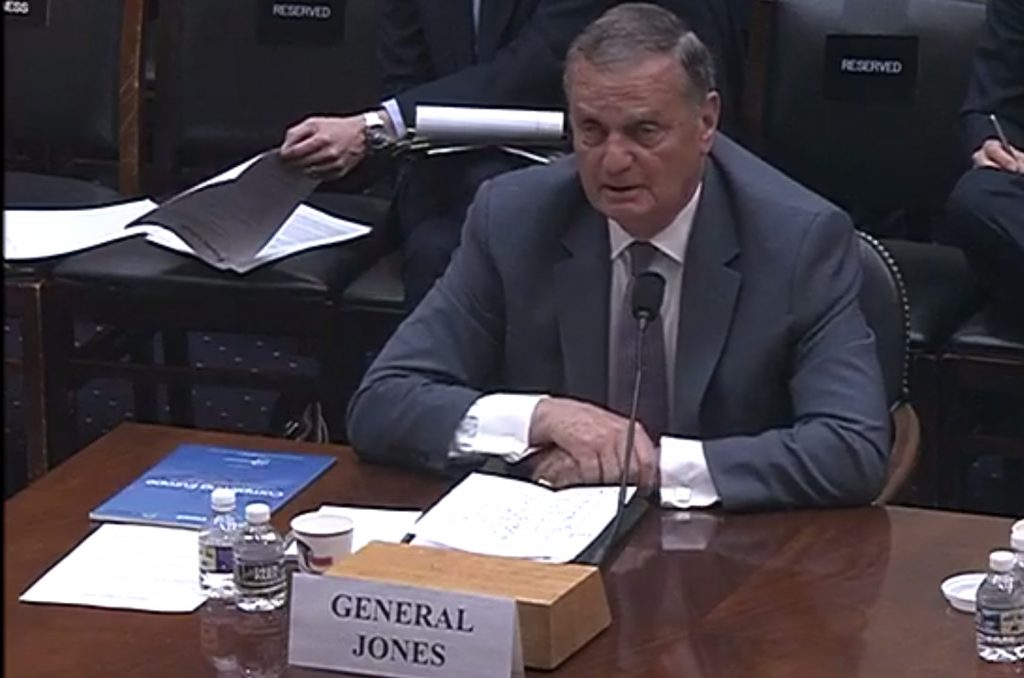 Atlantic Council leadership and experts testified to members of Congress on April 2 about ways in which NATO, the military alliance that is celebrating its seventieth year this week, can better prepare for the future in the face of an evolving threat environment.

“The future of NATO is not just a military future. It is about economic strength, it is about governance and rule of law… and it is about the ways in which we can and must be successful against the rise of these new autocracies,” retired Marine Corps Gen. James L. Jones, Jr., a former Supreme Allied Commander Europe and executive chairman emeritus of the Atlantic Council, told the House Foreign Affairs Committee.

Jones said: “NATO is undergoing a transformation that needs to continue from being a reactive defensive alliance into a more proactive engaged alliance, to actually prevent future conflict.”

Unlike the 20th century, in which NATO saw a clear mission in deterring the conventional threat of the Soviet Union, the Alliance now faces a range of threats from authoritarian regimes in Moscow and Beijing as well as economic challenges and disinformation campaigns.

“In short,” Jones argued, “this is a different world that we live in. It is a world that demands a very active and engaged NATO and it also demands American leadership and participation.”

“This is a different world we live, a world which demands a proactive NATO, and American leadership and participation,” General Jones tells @HouseForeign. 3/3 #NATOEngages pic.twitter.com/OJHtjCa9Fl

Atlantic Council Executive Vice President Damon Wilson, who testified alongside Jones, argued that the threats from China and Russia mean that “US interests are best served when Washington and its allies act together. We need our allies as force multipliers of our interests and values.” Unlike its competitors, Wilson argued, the United States enjoys the “best competitive advantage”: its friends and allies.

Wilson said the threat from Moscow necessitates “a significant and continuous military presence in the Baltic states, Poland, and in the Black Sea and Balkan regions, together with our allies.”

Atlantic Council Resident Senior Fellow Ian Brzezinski — in separate testimony to the Senate Foreign Relations Committee on April 2 — explained that “Russia’s military aggressions and sustained military build-up have reanimated the need to prepare for high-intensity warfare, the likes of which we have not had to face since the collapse of the Soviet Union.”

If @NATO is to be as successful in the future as it has been in the past seven decades, it must adapt to match new challenges. To that end, @IanBrzezinski says, NATO’s agenda should include five priorities. 2/4 #NATOEngages pic.twitter.com/XUZ7YR83eV

The increased specter of Russian military assertiveness means that allies need both to do more to increase their readiness to respond to crisis, as well as “invest more to increase their military capability,” especially in areas of need, “including air and missile defense, intelligence surveillance and reconnaissance, and long-range fires,” Brzezinski said. Additional support is critically needed in North and Central Europe, he added, as “the Alliance’s four Enhanced Forward Presence (EFP) battalions stationed in Poland, Lithuania, Latvia, and Estonia are positioned against divisions of Russian ground forces backed by sophisticated aircraft, air defense, helicopters, and missiles.”

While allied troops continue to be forward positioned to protect the Baltic states, Wilson said, “the United States is not and should be.”

At the same time, “the Russian challenge to us is likely to remain asymmetric,” Wilson argued, adding that “we should double down on our support, working with the European Union, to strengthen the resilience of democratic societies through efforts that range from diversifying energy routes and supplies to democratic defense of disinformation.”

Jones highlighted the Atlantic Council’s work on the Three Seas Initiative to develop north-south energy and telecommunications infrastructure in Central and Eastern Europe, which he believes “combined with the military posture of NATO… will contribute measurably to peace and stability in the European landmass.”

NATO must also pay attention to China’s growing influence in Europe, Wilson said. He argued that policy makers on both sides of the Atlantic need to agree to “common trade practices and approaches to set global standards, supporting our allies in establishing CFIUS-like review of foreign investments, and forging a concerted transatlantic effort to ensure the free world harnesses new technologies such as secure 5G before the authoritarians do.”

Beyond the immediate threats to the European Continent, NATO can also play a role in countering China’s growing global economic presence and Russian attempts to disrupt US interests in places like Venezuela, Wilson explained. He argued that “the United States should lead a more concerted effort to thicken the political bonds and operational ties between NATO and its global partners,” such as Australia, New Zealand, Japan, and South Korea, while also reaching out to the United States’ “other strategic partners such as India, and, in Latin America, Colombia, Brazil, and Mexico.”

The current burden sharing debate can misplace the focus on what’s strategically important inside in the alliance, @DamonMacWilson says.

The United States should bolster its alliances as a strategic comparative advantage over our adversaries. 3/3 #NATOEngages #NATOat70 pic.twitter.com/3a1bAJXKZc

Such outreach, Wilson said, could help create “a more capable and intentional global democratic response to the authoritarian challenge. It could also be a precursor to a more formal alliance among democracies who are committed to protecting their way of life and a democratic international order.”

All of these potential actions, Wilson maintained are possible if “Congress, the administration, and the American people [view] our alliances as national strategic asset.

“US leadership, after all, is the decisive element in determining the success of NATO’s future,” Wilson said.