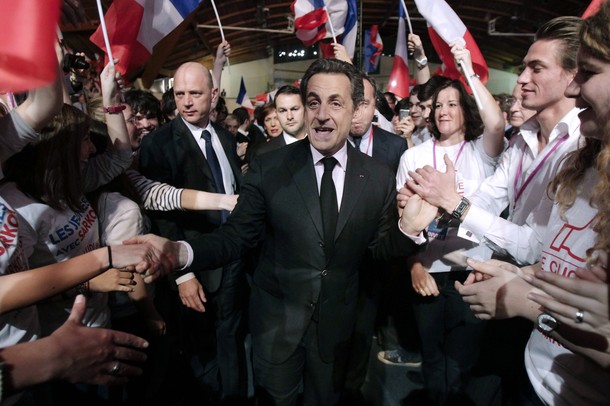 The French people go to the polls to choose their next president in a first-round election on April 22, with a second round between the two top contenders on May 6.

In June, they will also elect a new National Assembly, the lower house of the French Parliament whose majority party forms the government under the prime minister. Exceptionally, the French might use this dual presidential-parliamentary election cycle to split their vote between a strong chief executive from the right and a more emollient administration from the left.

The incumbent president, Nicolas Sarkozy, and his Socialist challenger, François Hollande, lead the first-round polling and are expected to face each other in the run-off. Sarkozy suffers from deep unpopularity as the “hyper-president” who has promised more than he has delivered, particularly on jobs and income — but who has performed well on the international stage. Hollande seeks to portray himself as “Mr. Ordinary,” someone the French can count on to speak softly and listen to their concerns — but he has never held office or borne government responsibility.

Both candidates paused their campaigns for a show of grief at the craven killings at Montauban and at Toulouse. Now, public and international attention has again turned to the race for president.

Scant heed has thus far been paid to the vote a mere month later, on the successive Sundays June 10 and 17, by which the French will elect a full new National Assembly, the lower house of the country’s Parliament.

The political group that wins a majority of seats in those National Assembly elections will be called upon to form a government. While divided government in the United States means opposition between the legislature and the presidency, in the French parliamentary-presidential system, power can be split within the executive, known as cohabitation. Under the French constitution, the president holds sweeping powers in international (including European) affairs, while presiding over the Council of Ministers and generally acting as head of state and guarantor of national sovereignty. But it is the government, led by the prime minister, which sets policy, particularly domestic policy.

Past legislative elections in France have often served to confirm the mandate to govern of a recently-elected president. But on this occasion the French may well decide to split their vote by re-electing Sarkozy in May to champion the interests of France abroad and then voting in a Socialist government in June to serve the interests of the French at home.

Sarkozy’s approval ratings are lowest on domestic policy, especially his perceived failure to keep his 2007 campaign promises on job creation and purchasing power. His flashy friends and lifestyle annoyed his compatriots in his early years as president and the French are still irked by his agitated demeanor, thin skin, and sharp tongue — all deemed incompatible with the regal presidency created by Charles de Gaulle.

Still, as demonstrated in the recent stake-out of Mohamed Merah in Toulouse, Sarkozy excels in acting as the president-protector. European actions on the Eurozone crisis would never have come as far as they have without Sarkozy pushing German Chancellor Angela Merkel. And in international affairs, whether grasping the nettle when France was European Union president during the Georgia war and the global financial crisis in 2008, or leading from the front in Libya in 2011 with Prime Minister David Cameron of Great Britain while the US led from behind, Sarkozy has protected French interests and asserted France’s role as a global player.

Nobody knows all this better than Sarkozy himself. In a major rally at Villepinte he proposed to curb illegal immigration by reviewing the Schengen open-border arrangements within the EU, stressing that the issue had to be dealt with at the frontiers of Europe, not just France. President-protector meets international statesman. Sarkozy’s 2012 campaign poster shows his profile against a background of the open sea, beneath the motto “La France forte.” The message is clear: Elect me and I will keep France strong in the world. In 2007, the background was a picture of rolling country hills.

Sarkozy’s international endorsements, from Cameron and Merkel especially, are as unusual as they are unequivocal in showing that Sarkozy the individual is running for re-election as president on a global stage, not seeking a mandate to govern only on a national level.

Sarkozy is a tough campaigner and he has not really begun to fight. Although he has already attacked Hollande as a “liar” for flip-flopping and a “lightweight” for lack of experience, Sarkozy should be expected to really come out swinging in the second round and use the lack-of-experience issue to try to demolish Hollande, who has never held ministerial office nor managed anything except the Socialist party.

At the moment, Hollande is running well ahead of Sarkozy in polls for the second round, but the reality is that the public is focused on the first round now and the whole mood changes in France between the two rounds. In the first, the French vote for their preference; in the second, they vote for their president. Fully a fifth of French voters do not decide on their choice until a couple of days before they vote. So the campaign between the two rounds will be decisive.

Sarkozy has lost the municipal, regional and Senate elections to the left since he became president in 2007. If during the second-round campaign one hears Sarkozy saying things like, “I will listen to the voice of the French people,” that could well be code for him saying he is willing to lose the National Assembly as well: “Elect me president, I won’t fight cohabitation.”

The irony is that only Sarkozy has the luxury of this position. For Hollande to secure power, he needs to win both the presidency and the legislative elections. Sarkozy wouldn’t be obliged to choose Hollande as prime minister in a cohabitation scenario; he could select any one of a number of other Socialists. For Sarkozy’s party colleagues to attain power again, they must first help re-elect Sarkozy, then get themselves re-elected by receiving a majority in the National Assembly.

In other words, in this French elections season, with the National Assembly vote following hard on the heels of the presidential poll, anyone who wants to win needs to win twice, except for Sarkozy. He only needs to win once.

Nicholas Dungan is a senior fellow in the Transatlantic Relations Program at the Atlantic Council. He can be contacted at [email protected]