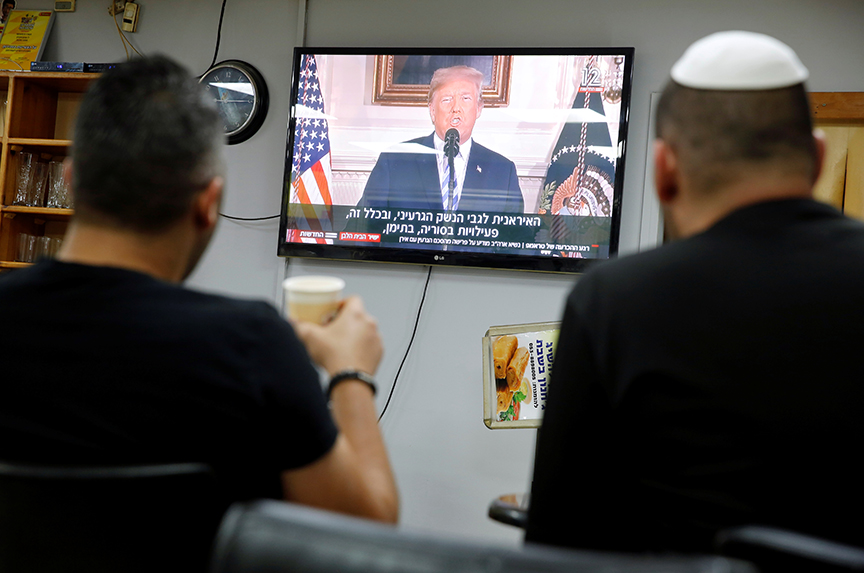 Israelis sitting in a coffee shop in Ashkelon, Israel, watched a television broadcast of US President Donald J. Trump announce his decision to pull the United States out of the Iran nuclear deal on May 8. (Reuters/Amir Cohen)

US President Donald J. Trump on May 8 withdrew the United States from the multilateral nuclear agreement with Iran.

The deal—formally known as the Joint Comprehensive Plan of Action (JCPOA)— was struck in 2015 by the United States, the United Kingdom, France, Russia, China, Germany, and Iran.

Here’s a look at reactions from around the world to Trump’s decision. [Editor’s note: We are adding reactions when available. Please check back for updates.]

“It is with regret and concern that we, the leaders of France, Germany and the United Kingdom take note of President Trump’s decision to withdraw the United States of America from the Joint Comprehensive Plan of Action.

“Together, we emphasize our continuing commitment to the JCPOA. This agreement remains important for our shared security. We recall that the JCPOA was unanimously endorsed by the UN Security Council in resolution 2231. This resolution remains the binding international legal framework for the resolution of the dispute about the Iranian nuclear program. We urge all sides to remain committed to its full implementation and to act in a spirit of responsibility.

“According to the IAEA, Iran continues to abide by the restrictions set out by the JCPOA, in line with its obligations under the Treaty on the Non-Proliferation of Nuclear Weapons. The world is a safer place as a result. Therefore we, the E3, will remain parties to the JCPOA. Our governments remain committed to ensuring the agreement is upheld, and will work with all the remaining parties to the deal to ensure this remains the case including through ensuring the continuing economic benefits to the Iranian people that are linked to the agreement.

“We urge the US to ensure that the structures of the JCPOA can remain intact, and to avoid taking action which obstructs its full implementation by all other parties to the deal. After engaging with the US administration in a thorough manner over the past months, we call on the US to do everything possible to preserve the gains for nuclear non-proliferation brought about by the JCPOA, by allowing for a continued enforcement of its main elements.

“We encourage Iran to show restraint in response to the decision by the US; Iran must continue to meet its own obligations under the deal, cooperating fully and in a timely manner with IAEA inspection requirements. The IAEA must be able to continue to carry out its long-term verification and monitoring program without restriction or hindrance. In turn, Iran should continue to receive the sanctions relief it is entitled to whilst it remains in compliance with the terms of the deal.

“There must be no doubt: Iran’s nuclear program must always remain peaceful and civilian. While taking the JCPOA as a base, we also agree that other major issues of concern need to be addressed. A long-term framework for Iran’s nuclear program after some of the provisions of the JCPOA expire, after 2025, will have to be defined. Because our commitment to the security of our allies and partners in the region is unwavering, we must also address in a meaningful way shared concerns about Iran’s ballistic missile program and its destabilizing regional activities, especially in Syria, Iraq and Yemen. We have already started constructive and mutually beneficial discussions on these issues, and the E3 is committed to continuing them with key partners and concerned states across the region.

“We and our foreign ministers will reach out to all parties to the JCPOA to seek a positive way forward.”

“Israel has opposed the nuclear deal from the start because we said that rather than blocking Iran’s path to a bomb, it actually paves Iran’s path to an entire arsenal of nuclear bombs, and this within a few years’ time,” he said.

“The deal did not push war further away, it actually brought it closer,” he said. “The deal did not reduce Iran’s aggression, it dramatically increased it. And we see this through the entire Middle East.”

“As we exposed last week, since that deal, Iran intensified its efforts to hide its secret nuclear weapon program. So if you leave all of this unchanged, all this combined is a recipe for disaster: a disaster for our region, a disaster for the peace of the world,” he added.

Barack Obama, former US president whose administration negotiated the nuclear deal with Iran.

“The reality is clear. The JCPOA is working—that is a view shared by our European allies, independent experts, and the current U.S. Secretary of Defense. The JCPOA is in America’s interest—it has significantly rolled back Iran’s nuclear program. And the JCPOA is a model for what diplomacy can accomplish—its inspections and verification regime is precisely what the United States should be working to put in place with North Korea. Indeed, at a time when we are all rooting for diplomacy with North Korea to succeed, walking away from the JCPOA risks losing a deal that accomplishes—with Iran—the very outcome that we are pursuing with the North Koreans.

“That is why today’s announcement is so misguided. Walking away from the JCPOA turns our back on America’s closest allies, and an agreement that our country’s leading diplomats, scientists, and intelligence professionals negotiated. In a democracy, there will always be changes in policies and priorities from one Administration to the next. But the consistent flouting of agreements that our country is a party to risks eroding America’s credibility, and puts us at odds with the world’s major powers.

“Debates in our country should be informed by facts, especially debates that have proven to be divisive. So it’s important to review several facts about the JCPOA.

“First, the JCPOA was not just an agreement between my administration and the Iranian government. After years of building an international coalition that could impose crippling sanctions on Iran, we reached the JCPOA together with the United Kingdom, France, Germany, the European Union, Russia, China, and Iran. It is a multilateral arms control deal, unanimously endorsed by a United Nations Security Council Resolution.

“Second, the JCPOA has worked in rolling back Iran’s nuclear program. For decades, Iran had steadily advanced its nuclear program, approaching the point where they could rapidly produce enough fissile material to build a bomb. The JCPOA put a lid on that breakout capacity. Since the JCPOA was implemented, Iran has destroyed the core of a reactor that could have produced weapons-grade plutonium; removed two-thirds of its centrifuges (over 13,000) and placed them under international monitoring; and eliminated 97 percent of its stockpile of enriched uranium – the raw materials necessary for a bomb. So by any measure, the JCPOA has imposed strict limitations on Iran’s nuclear program and achieved real results.

“Third, the JCPOA does not rely on trust—it is rooted in the most far-reaching inspections and verification regime ever negotiated in an arms control deal. Iran’s nuclear facilities are strictly monitored. International monitors also have access to Iran’s entire nuclear supply chain, so that we can catch them if they cheat. Without the JCPOA, this monitoring and inspections regime would go away.

“Fourth, Iran is complying with the JCPOA. That was not simply the view of my administration. The United States intelligence community has continued to find that Iran is meeting its responsibilities under the deal, and has reported as much to Congress. So have our closest allies, and the international agency responsible for verifying Iranian compliance – the International Atomic Energy Agency (IAEA).

“Fifth, the JCPOA does not expire. The prohibition on Iran ever obtaining a nuclear weapon is permanent. Some of the most important and intrusive inspections codified by the JCPOA are permanent. Even as some of the provisions in the JCPOA do become less strict with time, this won’t happen until ten, fifteen, twenty, or twenty-five years into the deal, so there is little reason to put those restrictions at risk today.

“Finally, the JCPOA was never intended to solve all of our problems with Iran. We were clear-eyed that Iran engages in destabilizing behavior—including support for terrorism, and threats toward Israel and its neighbors. But that’s precisely why it was so important that we prevent Iran from obtaining a nuclear weapon. Every aspect of Iranian behavior that is troubling is far more dangerous if their nuclear program is unconstrained. Our ability to confront Iran’s destabilizing behavior—and to sustain a unity of purpose with our allies—is strengthened with the JCPOA, and weakened without it.

“Because of these facts, I believe that the decision to put the JCPOA at risk without any Iranian violation of the deal is a serious mistake. Without the JCPOA, the United States could eventually be left with a losing choice between a nuclear-armed Iran or another war in the Middle East. We all know the dangers of Iran obtaining a nuclear weapon. It could embolden an already dangerous regime; threaten our friends with destruction; pose unacceptable dangers to America’s own security; and trigger an arms race in the world’s most dangerous region. If the constraints on Iran’s nuclear program under the JCPOA are lost, we could be hastening the day when we are faced with the choice between living with that threat, or going to war to prevent it.

“In a dangerous world, America must be able to rely in part on strong, principled diplomacy to secure our country. We have been safer in the years since we achieved the JCPOA, thanks in part to the work of our diplomats, many members of Congress, and our allies. Going forward, I hope that Americans continue to speak out in support of the kind of strong, principled, fact-based, and unifying leadership that can best secure our country and uphold our responsibilities around the globe.”