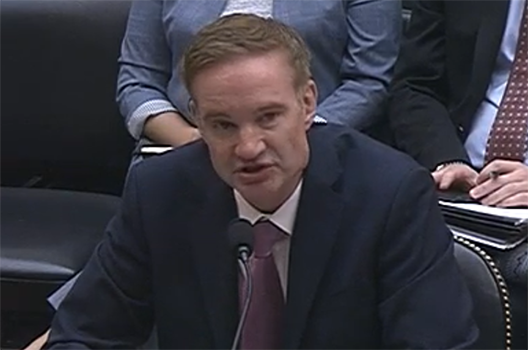 Michael Carpenter, senior director of the Penn Biden Center for Diplomacy and Global Engagement and a senior fellow in the Atlantic Council’s Eurasia Center, testifies before the House Foreign Affairs Committee on May 21, 2019.

The United States needs to do more to push back against Russia’s attempts to disrupt democratic societies around the world, Michael Carpenter, a senior fellow in the Atlantic Council’s Eurasia Center, told US lawmakers on May 21.

“Today, Russia is doubling down on malign influence operations across Europe and North America, but we remain unprepared, underfunded, and often ignorant of the threat,” Carpenter told members of the House Foreign Affairs Committee’s Subcommittee on Europe, Eurasia, Energy, and the Environment. He testified in a hearing on “Undermining Democracy: Kremlin Tools of Malign Political Influence.”

In order to begin to push back on the Kremlin’s increasing activity in Europe, Latin America, Africa, and North America, the United States needs “to focus more resources on rooting out Russia’s malign networks, addressing our own massive vulnerabilities, especially to foreign dark money, and imposing greater costs on Russia, when the Kremlin is caught interfering in our democratic process,” said Carpenter, who is also a senior director of the Penn Biden Center for Diplomacy and Global Engagement.

Carpenter’s comments come just days after Austrian Vice Chancellor Hanz-Christian Strache, the leader of the Freedom Party in Austria and the junior member of Austria’s coalition government, was caught on video speaking with a woman claiming to be a niece of a Russian oligarch. During the conversation, Strache and the woman conspired to use Russian funds to purchase an Austrian newspaper to direct positive coverage of Strache’s party. When the video was released by the woman, Strache resigned his position on May 18 and Austrian Chancellor Sebastian Kurz said he would cease cooperating with the Freedom Party and would hold snap elections later this summer.

While the specific Austrian example does not seem to have originated in the Kremlin, it is just another example of how far-right and other destabilizing actors are using support from Moscow to advance their agendas, Carpenter explained. Russian oligarchs have lent support to politicians throughout Europe, including in 2004 to a fraudulent presidential candidate in Latvia and to far-right candidate Marine Le Pen in France, he added.

?? Testifying before the @HouseForeign about Russia’s malign influence, @mikercarpenter said that Moscow’s “subversive attacks on our democracy can be grouped into three main categories: cyber operations, information warfare, and corrupt influence operations.” pic.twitter.com/5KRE6oOwQU

Russian actions have been more drastic in the Western Balkans, where the Russian military intelligence service (GRU) supported an attempted coup d’état in Montenegro in 2016 and a Russian oligarch “personally funded violent protests against the historic agreement between Greece and North Macedonia that paved the way for the latter country to join NATO,” Carpenter said.

Outside of Europe, “in the Central African Republic, Libya, Sudan, Madagascar, Syria and Venezuela, Russian private contractors provide services ranging from personal security to election support in return for access and money,” he added.

In order to begin to defend against this range of Russian activity, Carpenter argued, policy makers need to focus on how to limit the Kremlin’s ability to use its financial resources to fund its malign activities. “All of these operations are funded through a financial ecosystem that makes use of laundered money,” he explained. “The Panama Papers and other sources have showed how offshore networks of shell companies and shady financial institutions have enabled Russian oligarchs, officials, and organized crime syndicates to launder billions of dollars into Western financial institutions.” To combat this exploitation of financial institutions, Congress should implement “legislation to identify the beneficial owners of limited liability companies (LLCs)… since shell companies are often used to mask illicit financial transactions. Stricter anti-money laundering regulations are needed to tighten illicit financial flows and more transparency for high-end real estate transactions.”

US policy makers should also “address our own vulnerabilities by closing crucial gaps in governance,” Carpenter said, such as “our campaign finance system, which is so opaque that we don’t even have an inkling how much foreign dark money is sloshing around.” He added that “law firms need to be subjected to greater transparency so that attorney-client privilege cannot be used as a loophole through which foreign entities channel illicit funds to US legal representatives.”

In addition to actions to close vulnerabilities of the United States and its allies, Washington needs to impose “greater costs on Russia for its interference in our democratic process,” including sanctioning Russian banks in full, rather than just targeting individual Russian officials and oligarchs. “It is time to recognize that trying to change Russia’s behavior through targeted sanctions on this or that oligarch is not going to work,” he said. “It is time to impose real costs on Russia.”

Russia’s measures are only increasing in frequency, Carpenter warned lawmakers, and Washington needs to do much more to prevent the Kremlin from destabilizing US allies and causing disruption within US society. He lauded the effort many lawmakers are putting into the threat but cautioned that “a number of bills have been drafted to address these vulnerabilities, but none so far have been passed into law.” If the United States is going to get serious about pushing the Kremlin back, he argued, it needs to show tangible results.