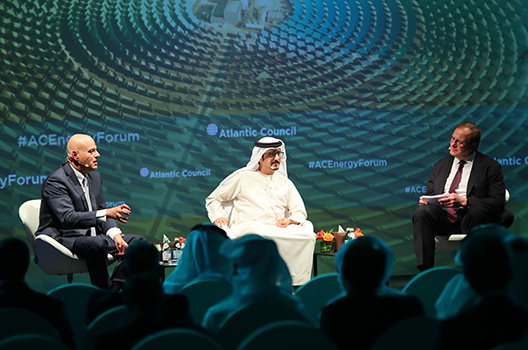 Diversification is key to surviving, and even thriving, in the current volatile energy market. Just ask Musabbeh Al-Kaabi and Claudio Descalzi.

Mubadala Chief Executive Officer (Petroleum & Petrochemicals) Musabbeh Al-Kaabi believes that all sources of energy will be required in the future. And so, Mubadala, a global investment company headquartered in Abu Dhabi, has made key investments in upstream (specifically, low-cost resources and natural gas) and downstream (in the highly competitive feedstock in the United States, for example).

While Eni Chief Executive Officer Claudio Descalzi says the energy firm he leads has invested in technology while keeping the health of the environment in mind.

Atlantic Council President and Chief Executive Officer Frederick Kempe hosted a discussion with and Descalzi and Al-Kaabi at the Atlantic Council’s 2019 Global Energy Forum in Abu Dhabi. The discussion centered on the diversification strategies both men have adopted.

Descalzi noted that “we passed through a very transformation moment” in the energy world which has provided a lot of opportunity. On January 12, Abu Dhabi National Oil Company (ADNOC) Chief Executive Officer and the United Arab Emirates’ Minister of State Sultan Al Jaber announced at the Global Energy Forum that ADNOC had awarded two new offshore blocs to Eni and Thailand’s Public Exploration and Production Company (PTTEP).

“To transform yourself in this period you have to be more competitive, you must be faster, you must have the best technology, and you have to find synergies because that is a very important way to reduce your costs,” said Descalzi.

Eni, Descalzi said, has been transformed from an oil and gas company into an energy company that has invested heavily in technology and ventured into parts of the world where others avoid and, as a consequence, competition is less.

Eni has also expanded what Descalzi described as its “center of gravity” by working with firms like Mubadala and ADNOC, and in countries like Oman, Bahrain, and Mexico.

Al-Kaabi is most excited about the information and communications technology part of Mubadala’s portfolio. Mubadala established Yahsat, a satellite communications company, which in 2018 announced the launch of a third satellite that would extend Yahsat’s commercial Ka-band coverage to 60 percent of the population of Africa and more than 95 percent of Brazil’s population.

The technology Eni has developed in this regard is essential to transform the company and respect the environment, said Descalzi, adding: “Our aim is to be completely carbon neutral.”

Kempe asked Al-Kaabi and Descalzi what keeps them up at night. Both prioritized the safety of their teams.

“We adopted a theme at Mubadala that safety of our people and our facilities is a core value and we are not going to compromise. What the oil price or the commodity price is, we always remind our people that safety comes at the top of anything we do,” said Al-Kaabi.

Besides the safety of his team, Descalzi listed the importance of asset integrity and building relationships with and having the capabilities to help the communities in which Eni operates.

And what excites them?

Technology, said Al-Kaabi without missing a beat. “I am positive on seeing the right technologies being deployed in the industry to improve the safety plus mitigate climate change and emission in the future,” he said, adding he would like to see technologies like carbon capture deployed on a wider scale. “We keep saying oil and gas is not bad, emission is bad,” he said. “We need to find the right technology that will minimize this in the long term.”