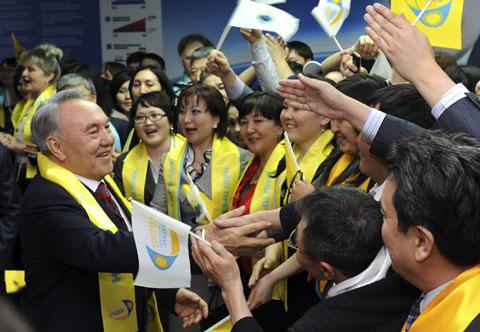 On Friday Kazakh President Nursultan Nazarbaev will officially be sworn in for a new five-year term in office, following an election which saw him take home a staggering 95.5 percent of the vote. Turn out was also officially 90 percent. Like so many elections before it in Kazakhstan, the polls were marred by reports of irregularities, ballot stuffing and other acts of electoral mischief. The local Azat Party has accused the government of tampering with the balloting process in a number of ways. International observers also voiced concerns, but the Parliamentary Assembly of the Council of Europe hedged a bit in saying the poll "reflected the will of the people."

So, what does it take to win over the will of 95.5% of 90% of Kazakhs? Surprisingly, the answer lies in the most banal clichés of western politics.

Post-partisanship is in: Besides the incumbent Nazarbaev, only three of the original 22 potential presidential candidates made the final ballot. In a statement, the OSCE noted, "The process was marked by the lack of clear rules for the verification of supporting signatures." Of the final three opposition candidates, all had publicly declared their support for the continued rule of Nursultan Nazarbayev. One candidate, Mels Yeleusizov, said he himself voted for Nazarbaev. Another, Gani Kasamov of the Patriot Party, lists Nursultan Nazarbayev as one of his heroes on his personal Facebook page.

Politics start at the local level: Local governments were enlisted to help get out the vote across the country. "Many local authorities intervened in the election process in order to increase turnout," the OSCE said in its report on vote-tampering. The most popular — and effective — approach was the "carousel method." While reports have surfaced that buses owned by city sanitation offices were shuttling people to multiple stations, all in an effort to energize the grassroots. Government officials and school teachers were also encouraging voters to vote for Nursultan Nazarbaev.

Speak the language of the people: Since independence from Russia, the Kazakh language has been promoted in a haphazard fashion across the country using, among other methods, poetry competitions and requirements that television channels broadcast a majority of their programming in Kazakh. Officially, the only public position that requires one be fluent in Kazakh is the presidency. There is a test, of course. Ualikhan Qaisarov, of the opposition Azat party was disqualified with 28 spelling errors. Another opposition candidate publicly bowed out of the exam saying there was no way he would pass.

But, the afore mentioned candidate Gani Kasamov managed to pass his exam — reportedly by signing a folk tune in flawless Kazakh. Not to be outdone, presidential candidate Zhambyl Akhmetbekov of the Communist People’s Party of Kazakhstan has appeared on Kazakh television singing songs and giving amateur karate demonstrations.

Retail politics: Other than an January 28th speech, the 70 year-old Nazarbaev refused to campaign for re-election. To be fair, after ruling for over two decades, his views are pretty well known. Supporters of the Nur-Otan party plastered advertisements for the candidate across the country. Opposition parties were given roughly a month to successfully pass the Kazakh language exam and mobilize their supporters. With so little time to organize most opposition groups called instead for a boycott. Sometimes the best glad-handing is that which is not done at all.

It’s the economy stupid: The development of the Kashagan oil field might nudge the country into one of the top ten oil producers in the world. Due to high oil revenues and one of the highest standards of living of former Soviet republics, Kazakhs have been generally tolerant of Nursultan Nazarbaev’s continued rule. Or as the Chinese state-run Xinhua, noted, "In 2010, Kazakhstan’s economy grew by 7%, with the country’s per capita GDP exceeding 9,000 U.S. dollars, compared with 700 U.S. dollars in 1997. The country’s foreign exchange reserves reached 66.4 billion U.S. dollars by the end of February." Or as the same piece puts it even more simply, "Nazarbayev’s reelection, for the fourth time, stands in sharp contrast to what has been happening in North Africa and the Middle East in recent months." Nazarbayev himself alluded to events in the Middle East during his speech in which he said "the world sees bloodshed and ethnic discord, we are unified".

On January 31, Kazakhstan’s President Nursultan Nazarbayev nixed a poll which would have canceled presidential elections in 2012 and 2017. The change of heart followed the Constitutional Council’s ruling that such a move was unconstitutional amid international criticism. The re-election of Nursultan Nazarbayev, 70, gives the ruling regime more time to work out succession issues in the next five years.

Joseph Hammond is a reporter for Radio Free Europe in Prague, and an alumni of the Atlantic Council’s Young Turkey/Young America initiative. Image credit: Reuters.