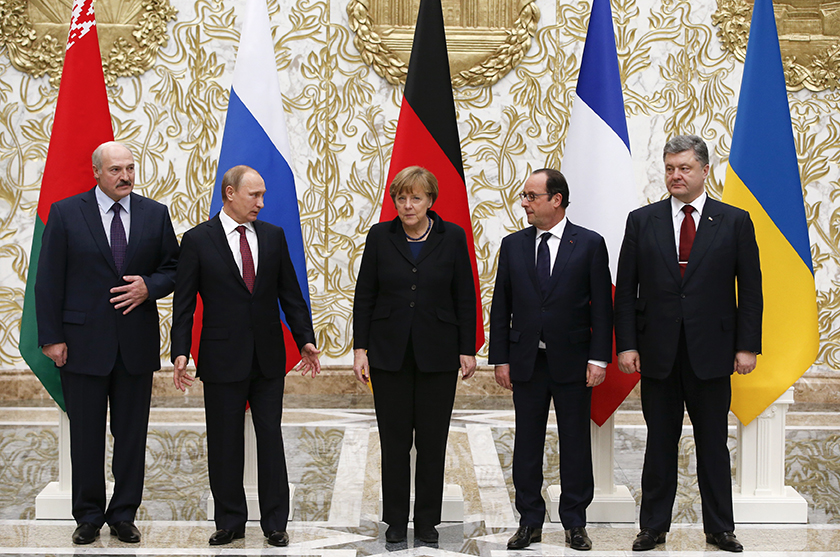 Even when it is effective, diplomacy can be an unsightly business. Perhaps nothing illustrates this better than that ugly, illegitimate child of Mother Russia’s war in Ukraine: the Minsk agreements.

In recent months, Germany and France have been pressing Ukraine to pass a local elections law as the basis for holding elections in the Donetsk People’s Republic and the Luhansk People’s Republic, the occupied territories in eastern Ukraine controlled by Moscow’s surrogates. The Germans and French point out that holding elections there is a requirement of the Minsk agreements, as is the passage of a constitutional amendment providing greater local control to the authorities of the occupied territories.

In Ukraine, these requirements are much resented; they appear to be serving the interests of the Kremlin aggressor, which intervened in the Donbas in order to weaken Kyiv’s control in the east and subsequently destabilize the government. Moreover, Ukrainians point out, the Minsk II agreements in which these onerous requirements are spelled out were needed only because Moscow violated Minsk I with its 2015 offensive to seize Debaltseve. In other words, Moscow was rewarded and Ukraine disadvantaged because the Kremlin brazenly violated Minsk I. Not surprisingly, all of this has made passage of the local elections law and the constitutional amendment quite controversial in Ukraine’s parliament.

France and Germany are nonetheless insisting on, first, passage of at least the elections law. While publicly they state that this is essential because it is required by Minsk, privately some officials concede that they are asking for the law because those Europeans who want to lift the sanctions against Russia are using Ukraine’s reluctance to pass the elections law as an argument for doing so. Unfortunately, there is some truth to this line of thinking, as witnessed by the recent passage in the French parliament of a non-binding resolution calling for sanctions relief.

A good number of Rada members—in particular Yulia Tymoshenko’s Fatherland Party and Andriy Sadovyi’s Self-Reliance Party—oppose the local elections law because they fear that elections in the occupied territories, with large numbers of Russian soldiers and substantial Russian military hardware on hand, would ensure a falsified vote, with Moscow’s agents the winners. But the Americans, French, and Germans counter that Minsk II mandates that local elections be held in accordance with Ukrainian law and the best international standards. This means that Ukraine can include provisions that strictly require the departure of Russian troops and equipment, and that ensure robust OSCE and Ukrainian election monitoring that would make it extremely difficult to conduct falsified elections. The clincher, of course, is that if these conditions are not met, Ukraine is under no Minsk-related obligation to hold elections.

This logic is understood among the Ukrainian leadership and they will probably proceed with a good faith effort to pass the local elections law in the coming months. While the debate will be loud, they see a better than even chance to pass the legislation, which will contain the necessary safeguards to protect Ukraine’s interests by ensuring a fair election. That also makes it likely that Moscow will call foul and refuse to take the necessary steps—removing its troops and weapons—that would enable a vote. But if this plays out, Ukraine would still have fulfilled its Minsk obligations, undercutting the arguments of those in the EU who would like to ease sanctions.

None of this is pretty. In an ideal world, the United States and EU would have quickly called Moscow’s “covert intervention” in the Donbas the aggression that it is and we would not need a Minsk process to ensure the maintenance of European sanctions. But ideal conditions have never featured in the bloody history of Ukraine and Eastern Europe. For the moment, Ukraine will have to play its Minsk cards with skill in order to maintain the support it needs from the EU.