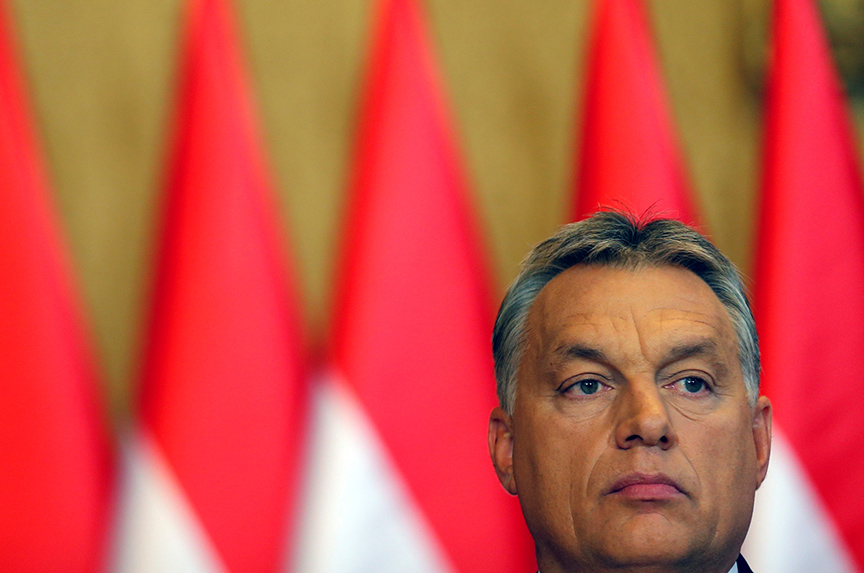 In 2010, Viktor Orbán was swept to power on the back of a populist backlash against Hungary’s left-wing government, which was mired in corruption scandals and criticized for austerity measures it adopted in the wake of the 2008 financial crisis. Today, Orbán threatens Hungary’s democratic character.

As prime minister, Orbán has embarked on a dangerous path toward autocracy—a new type of bolshevism characterized by radical nationalism, monopolized power structures, illiberal policies, and anti-capitalist and statist rhetoric.

Orbán has consolidated his power and made it harder for the opposition to challenge him. Over the years he has stripped the Constitutional Court of its independence, placed the country’s media outlets under the control of party hacks [In October, Orbán orchestrated the closure of Hungary’s largest opposition newspaper, Népszabadság.], and eroded plurality in the electoral system. His social policies have impoverished millions and led to the largest outflow of Hungarians from Hungary since the 1956 revolution.

It is perhaps ironic that as a student organizer in 1989, Orbán played a courageous role in bringing down Communism in Hungary. In terms of sheer oppressiveness, Orbán’s regime is a far cry from the brutal communist regime of the 1950s, but his tactics have been that of a classic demagogue: populism, corruption, fearmongering, and intimidation. His populist rhetoric—not unlike that of Donald Trump’s—has whipped up tribal instincts and deflected attention away from his policies by blaming the country’s challenges on a rotating cast of enemies: shadowy “communist influences,” foreign banks, Muslims, migrants, and liberals in Brussels and Washington.

Admittedly, the Orbán regime is not without its paradoxes. While increasingly euro-skeptic, Orbán supports the creation of a European army and stronger coordination on border security. Hungary is a supporter of NATO and the US-led coalition against the Islamic State of Iraq and al-Sham (ISIS). The prime minister continues to promote foreign investment and economic ties to key trading partners such as Germany.

Yet for all this balancing act, Orbán’s model poses a systemic risk to the transatlantic alliance. Orbán is diligently building support for a “counterrevolution” in Europe—one that harks back to the Holy Alliance of the 19th century, or, even more dangerous, to the interwar years in the 1920s. He is assembling a coalition of like-minded leaders in the region and is leading efforts to weaken the values the EU is built on from the inside.

All is not lost, however. Despite his best efforts, Orbán—like the Communists before him—has not succeeded in uprooting Hungary’s democratic values. Hungarians remain tenacious defenders of democracy. As Orbán shutters mainstream papers and outlets, a community of underground investigative journalism outlets has blossomed. Websites like 444.hu, Átlátszó, or Direkt36, which rely on grassroots donations, have exposed a number of major scandals that have embarrassed Orbán, and even occasionally clipped his wings. A plethora of NGOs does tremendous work to push back against government encroachments into pluralist spaces.

It is primarily the responsibility of the Hungarian people to change the government’s course. Yet with the shrinking political and media space in Hungary, Western involvement is critical to even out the odds and keep the door open for change at the ballot box in 2018. The European Union and the United States need to keep hope alive for Hungary’s civil society.

EU member states must understand the systemic risk Orbán’s government poses to the European project. The EU should withhold funds to Hungary if Orbán continues down his autocratic path. It should also rethink the enforcement strategy of its membership criteria and design more flexible mechanisms to deal with future Viktor Orbáns.

The next US administration should double down on US President Barack Obama’s policies in Europe. It should take a principled and vocal stance in support of the rule of law, and checks and balances; and take steps in support of Hungary’s civil movements and what remains of the free media.

Restoring the Hungarian-language broadcast of Radio Free Europe/Radio Liberty would send a symbolic message. Organizations like the National Democratic Institute could help train the next crop of Hungarian democrats to rebuild an effective political opposition and turn civil dissatisfaction into an organized political movement. Singling out corruption through sanctions and travel bans on regime cronies is another powerful tool that the United States should continue to use.

On October 23, 1956, the Hungarian people, then living under Soviet oppression, rose up against tyranny. Brutally squashed by Nikita Khrushchev’s tanks two weeks later, it would be another thirty-three years before the fight for freedom was eventually won.

The West could not help save Hungary in 1956 short of risking a nuclear confrontation with the Soviets. Today, we can and must act.  As we celebrate the bravery of the Hungarian people sixty years ago, it is our responsibility to support a fully functioning democracy in Hungary—a demonstration that the West stands by the Hungarian people in their struggle for an open, just, and inclusive society.

David Koranyi is the director of the Eurasian Energy Futures Initiative at the Atlantic Council. He formerly served as undersecretary of state and chief foreign policy and national security advisor to Hungarian Prime Minister Gordon Bajnai.

Christopher Maroshegyi is an analyst at Albright Stonebridge Group, a global business strategy firm. He was a Fulbright scholar in Budapest, Hungary.