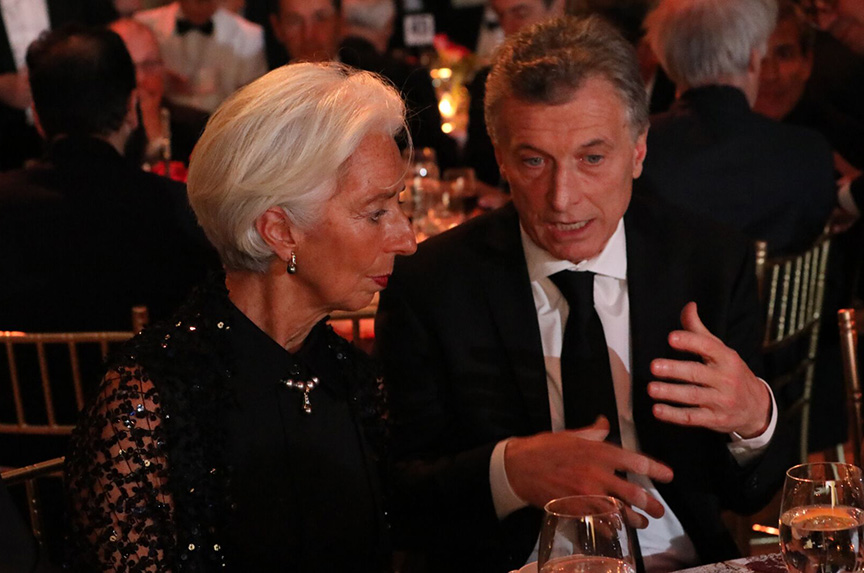 On September 24, Mauricio Macri shared a dinner table (some laughs and an animated conversation) with Christine Lagarde in New York City. The Argentine president told guests at the Atlantic Council’s Global Citizen Awards dinner about the great relationship he had with the managing director of the International Monetary Fund (IMF).

Two days after President Macri was honored with a Global Citizen Award from the Atlantic Council, two days later he received even more good news: the IMF had agreed to increase its support to Argentina to $57.1 billion, the largest loan in the Fund’s history, to be disbursed over three years.

Argentina’s economy has been battered by a run on the peso, double-digit inflation, and a severe drought that has impacted crop yields in one of the world’s largest exporters of soybean and corn.

In June, the Macri government signed a three-year $50 billion standby financing deal with the IMF. The subsequent slide of the peso contributed to the government proposing austerity measures that, while unpopular in Argentina, were welcomed by the IMF.

On September 26, Argentina’s economy minister, Nicolás Dujovne, said the IMF agreed to increase the loan by $7.1 billion. The agreement is pending IMF Executive Board approval.

“The increased support is in line with the impression that the IMF has appeared eager in recent months to constructively engage with the Argentinian government and provide the support needed to stabilize the economy,” said Bart Oosterveld, director of the Atlantic Council’s Global Business and Economics program.

Lagarde said in a statement: “Argentina has developed a strengthened economic plan that is aimed at bolstering confidence and stabilizing the economy.”

“At the core of the new plan is a fiscal policy aimed at strengthening its fiscal position and having a sustainable, appropriately financed budget, a strong monetary policy focused on reducing inflation, a floating exchange rate policy without intervention,” she added.

The IMF loan comes with stringent conditions, including that Argentina commit to zero deficit for 2019, and agreements from the Macri government to cut spending and Argentina’s central bank to intervene in currency markets only in extreme circumstances.

“These decisive steps will reduce the government’s financing needs and bring down public debt,” Lagarde said.

Not everyone is supportive of the IMF’s plan, however. The president of Argentina’s central bank, Nicolás Caputo, resigned unexpectedly this week reportedly over differences with the IMF.

“The conditions [of the IMF loan] are consistent with those in other recent carefully monitored programs, such as the one in Ukraine, and IMF staff will regularly visit and otherwise track progress,” said Oosterveld.

The Argentine Congress must next approve Macri’s IMF-backed zero-deficit budget. Macri is confident that it will.

However, the austerity measures imposed by the Macri government are not popular in Argentina. Thousands of Argentines turned out to protest this week. Many Argentines blame the IMF for their country’s financial crisis between 2001 and 2002 that drove up unemployment and the poverty rate.

“Most Argentines blame the IMF for imposing and sustaining austerity measures that led to the country’s worst economic crisis in 2001, which pushed millions into poverty,” Tufro explained. “By most accounts, including an internal IMF audit report, the IMF overestimated growth and the success of economic reforms while continuing to lend Argentina money in 2001, which ultimately led to the country’s unsustainable debt burden. As the IMF prepares to implement the biggest loan in its history in Argentina, it would be wise to learn from its past mistakes and proceed with caution with an eye toward keeping the country’s debt burden under control.”

The IMF is mindful of this history.

“The fragility of support for the IMF in Argentina is one of the reasons the Fund is eager to make this program work,” said Oosterveld.

Lagarde said that in order to “tackle inflation, the authorities will shift towards a stronger, simpler, and verifiable monetary policy regime.”

“A great deal of work remains to be done if Argentina is to respond effectively to the current challenging circumstances,” she added.

In lighthearted comments at the Atlantic Council’s Global Citizen Awards dinner, Macri said he had a “great relationship” with Lagarde “some months ago”—a thinly veiled reference to the $50 billion standby financing deal his government reached with the IMF in June. Macri was confident that things will only get better “and it will end up in the whole country crushing on Christine!”