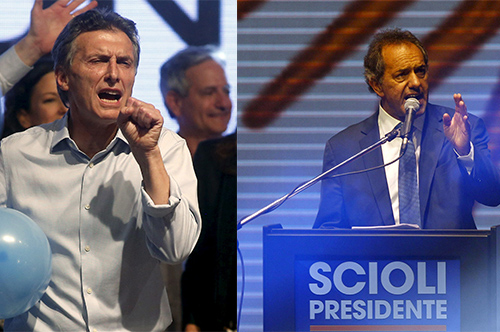 It is little surprise that Argentina’s presidential elections have gone into a second round, but what is startling is the narrow margin between the two leading candidates—both of whom promise change, one more so than the other.

Ahead of the Nov. 22 runoff, both candidates will be looking to woo the supporters of the man who came in third place—Sergio Massa. Will Massa endorse Macri? And even if he does, can he take all his supporters with him?

Peter Schechter, Director of the Atlantic Council’s Adrienne Arsht Latin America Center, and Jason Marczak, the Center’s Deputy Director, discuss these and other questions in an interview with the New Atlanticist’s Ashish Kumar Sen. Here are excerpts from our interview:

Q: To what extent was President Fernández de Kirchner—and the impact of her policies on the economy—a factor in the election outcome?

Schechter: It’s hard to say because the race was not a referendum on the Kirchner years. This may sound strange to foreigners who easily criticize the often-irresponsible economic policies of both Presidents Nestor and Cristina Kirchner. But, the fact is that a large number of Argentines continue to believe that those economic policies have been good for alleviating the burdens on the poorest parts of the country, good for increasing access to medicine, housing and other social goods.

With a President as controversial as she was, it was interesting that this campaign was really not a referendum. Even the opposition talked about change, but did not talk about “We need to get rid of her. We need to turn the page away from her.”

The results were massively surprising. What they denoted was something that no poll predicted, which was that there was a real sense that the country needs to move in a new direction. All the polls showed Scioli coming in the upper 30s to 40 percent range and Macri coming in in the upper 20s. What really happened was Scioli and Macri tied by one and a half percentage points.

Marczak: Right up until the vote, it was unclear if Scioli was going to win outright in the first round or if it would go into a second round. Most surprising is not the fact that it is going into a second round, but the fact that Macri’s share of the vote total was within two percentage points of Scioli. Nobody expected the difference between Scioli and the runner-up to be as close as it was.

Q: What change have the two leading candidates promised?

Marczak: Scioli wants to continue with many of the social and economic policies of President Fernández de Kirchner, but with a twist. After all, she’ll leave office on December 10 with around 50 percent popularity and with an eye toward returning to the presidency in 2019. Scioli wants to open up Argentina more to foreign investors. He has talked about shifting course economically, but still within the general parameters of the direction in which President Fernández de Kirchner has taken the country.

Mauricio Macri, on the other hand, wants a 180-degree shift insofar as the country’s economic policies. He wants to figure out a solution with the hedge funds in New York, which has led to Argentina technically being in default. He wants to get rid of capital controls. He wants to make Argentina, once again, a prime destination for foreign investors, and that is why his surprisingly close showing in the first round has Argentina’s financial markets up. Scioli wants Argentina to be a destination for investors as well, but he wants to do that within some of the confines of the economic policies of Fernández de Kirchner.

Q: Ahead of the Nov. 22 runoff vote, do you expect Sergio Massa, a former ally of the Fernández de Kirchner’s who moved into the opposition, to back Macri? And even if he does, will he be able to take most of his supporters, dissident Peronists, with him or will some of them now likely vote for Scioli?

Schechter: I do expect Sergio Massa to support Macri. That, too, will be a moment that is earthquake-like. Sergio Massa is a Peronist. He is a Peronist in opposition to Cristina Kirchner, but he is still a Peronist. The idea that Peronism would go outside of the party to support a non-Peronist candidate is pretty revolutionary.

At the very least, I expect Massa to endorse change. At the very best, I expect him to give a warm endorsement to Macri. Throughout the campaign both of these candidates were at great pains not to attack each other. I expect that there has been some discussion between these men about what would happen if one gets into the second round.

There are some Peronists who voted for Massa as a way to not vote for the candidate of Cristina Kirchner that will not be able to bring themselves to vote for Macri. My expectation is that without a doubt half of Massa’s vote—11 percent—is going to move to Macri. That leaves another 11 percent that is up for grabs, and those will be the people who make or break the next President of Argentina.

Marczak:Massa will have an influential role leading up to the second round. He is poised to be the kingmaker, but the question is if he really has the power to sway all of his voters for one candidate or the other.

I believe Massa will support Macri in the second round. But independent of whether Massa does or doesn’t support Macri, many of Massa’s voters are likely to be Macri supporters. Massa represented some change; Marci represented a lot of change. Macri just needs most of Massa’s voters, not all, to win in a second round. The people that voted for Scioli in the first round are people who support continuity, whereas the people who voted for Massa and Macri both support some type of change.

It is going to be a very tight second round. Given the fact that there is a two percentage point difference between Scioli and Macri right now, Massa will definitely play an influential role leading up to the second round.

Q: What effect will this outcome have on Argentina’s economy?

Schechter: Argentina’s economy needs to be reformed. There is no doubt that the economy right now is way behind other developing economies in the world and a number of Latin American economies in its ability to innovate, increase productivity, and its ability to integrate in world value chains. Whether we like it or not the world is becoming everyday a more single economy and for Argentina to participate in that single economy is going to require important changes, some of which will be difficult.

Marczak: Whether Scioli or Macri wins in the second round, foreign investors will welcome change from the current administration. Anything but Cristina is how many foreign investors are looking at the trajectory of Argentina’s economy. That being said, given the fact that Macri is invested in quickly rebooting the Argentine economy and recasting the way Argentina is viewed economically and politically in the outside world, a Macri victory would be that much more welcomed by the investor community.

Over the course of Fernández de Kirchner’s presidency, relations have frayed with a number of countries, including the United States, and a Macri victory would open the doors for even quicker warming of relations between the United States and Argentina.