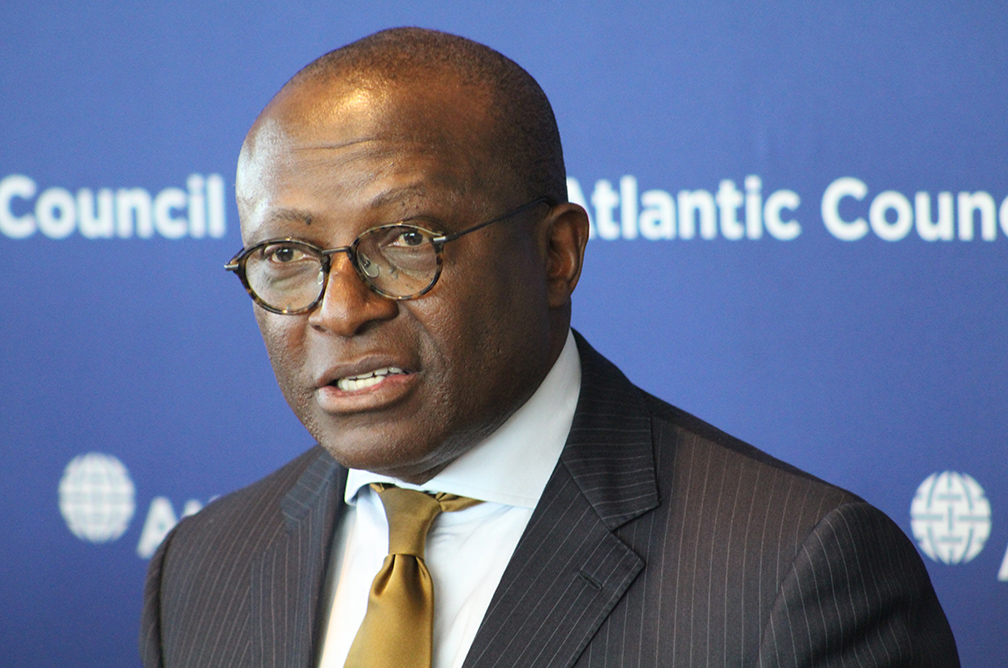 Joseph Kabila has no intention of seeking a third term in office. The fact that he will likely remain president of the Democratic Republic of the Congo (DRC) long after his term ends in December—until a successor is elected—is simply because he respects the constitution, said Barnabé Kikaya Bin Karubi, the president’s diplomatic advisor.

The DRC’s constitution only allows a president two terms in office. There are concerns within the international community and the Congolese opposition that the president intends to cling to power after his second term expires. The decision by the DRC’s election commission to push elections out to 2018 and a court ruling that permits Kabila to remain in power until a successor is elected have only cemented these concerns.

Kikaya, however, was adamant that Kabila has no intention of remaining in office indefinitely.

“When did President Kabila say he wants a third mandate,” Kikaya asked.

“On the contrary, if you read his speeches to the nation every single year he repeats, ‘I will respect the constitution,’” he said. “By what magic will President Kabila’s name be on the ballot when we have the upcoming elections? It is impossible.”

Kikaya said Kabila will not be forced into making a public declaration of his intentions. “In Congo, we don’t work under pressure. Nobody will ever pressurize him to say anything,” he added.

Corneille Nangaa Yobelou, president of the Independent National Electoral Commission (CENI), said whether or not Kabila has publicly declared his intention to seek a third term is a “false problem.”

“[T]he constitution has not changed… and he cannot be considered a candidate,” he added.

Kikaya and Nangaa spoke at an event co-hosted by the Atlantic Council’s Africa Center, the McCain Institute for International Leadership, and the International Republican Institute in Washington on October 13.

Kabila’s second and final term in office expires on December 19. Elections are due in November. However, CENI has said that it is not possible to hold elections before 2018 because it will take at least until July of 2017 to update the voter rolls.

“We were a bit surprised to hear the announcement of the expected delay of elections for up to two years,” said Elizabeth Lewis, regional deputy director, Africa, at the International Republican Institute.

“There is doubt that that length of time is necessary to hold credible elections,” she added.

Referring to the specific and, according to some Kabila critics, arbitrary 504-day timeline set by CENI to hold elections, Nangaa said this was reached in consensus with a variety of electoral experts.

“If you’re sick and you go to the doctor you have to do what he prescribes,” said Nangaa. “You can’t try and do something quicker or do something else just so you can try to heal faster.”

Kabila’s critics see the postponement of the elections as a way to extend his term in office. There has never been a peaceful transition of power in the DRC. Kabila came to power in 2001 after his father, Laurent, was assassinated by his own bodyguard. He was elected president in 2006 and again in 2011.

Concerns that Kabila has no intention of giving up office have sparked a political crisis marked by deadly protests. Dozens of people were killed and opposition parties’ offices burnt in the capital Kinshasa in September. The United Nations has accused Congolese security forces of using excessive force against the protesters.

In June, the US Treasury Department imposed sanctions on Celestin Kanyama, Kinshasa’s police commissioner, for “contributing to the conflict” in the region.

John E. Smith, acting director of the Treasury’s Office of Foreign Assets Control, said Kabila’s government has “engaged in a pattern of repression, including the arrest of opposition members and violent suppression of political protests, all to avoid scheduling national elections.”

Opposition figures who have spoken out against Kabila have been thrown into prison, Moise Katumbi, the DRC’s leading opposition candidate for president, said in a meeting at the Atlantic Council in July.

Kikaya said it would be “incorrect” to judge the political situation in the DRC based on the protests in Kinshasa. Kabila, Kikaya contended, is determined to ensure a peaceful transfer of power. “Indeed, the DRC is dedicated to organizing fair, credible, peaceful elections,” he said.

Kikaya cited the DRC’s war against M23 rebels in the country’s east from 2012 to 2013 as a reason for the delay in holding the elections because enormous resources were diverted to this effort, making it impossible to prepare for the election.

“President Kabila did not cause the shortfalls in the electoral process. The problems were well beyond his control,” the president’s advisor said. Kikaya suggested one way to put the electoral process back on track would be for the international community to urge the DRC’s main opposition leaders to end their boycott of the national dialogue. The Catholic Church has also pulled out of the dialogue citing a lack of inclusivity.

Nangaa, who spoke in French through an interpreter, delivered a detailed explanation of why it is impossible to hold elections before 2018. He also noted a lack of trust among the political actors and toward the electoral commission.

The ‘fragility of peace’

The DRC is a mineral resource-rich nation the size of Western Europe. From 1994 to 2003, it was roiled in conflict linked to developments in neighboring Rwanda where a genocide had taken place. At least five million people died in the war in the DRC.

Nangaa issued a dire warning of the “great possibility” of another outbreak of violence that he said could turn the DRC into “something like Libya.” Chaos has prevailed in Libya since its longtime leader, Moammar Gadhafi, was ousted in the Arab Spring uprising in 2011.

Emphasizing the “fragility of peace” in his country, Kikaya cautioned against rushing into a flawed electoral process that risks stability.

Image: Congolese President Joseph Kabila will not be forced into making a public declaration of his intentions regarding the presidency, Barnabé Kikaya Bin Karubi, the president’s diplomatic advisor, said at the Atlantic Council on October 13. “In Congo, we don’t work under pressure. Nobody will ever pressurize him to say anything,” he added. (Atlantic Council/Julian Wyss)