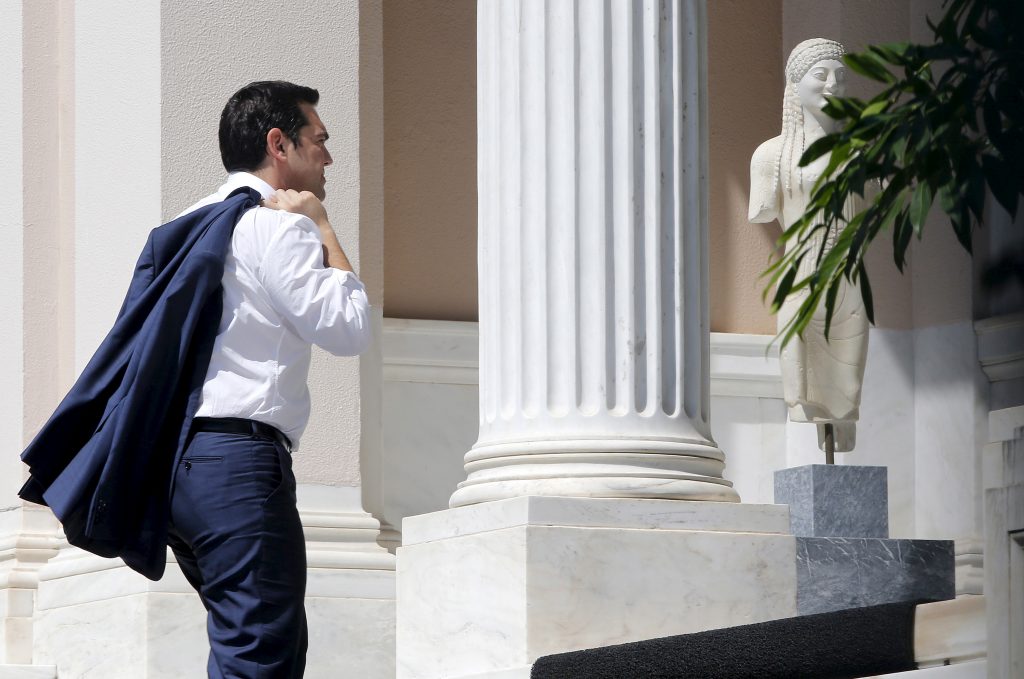 Greek Prime Minister Alexis Tsipras’ decision to resign and call snap elections in an attempt to shore up support for a harsh bailout package will split his leftist party, says the Atlantic Council’s Fran Burwell.

Syriza has been a “broken party” since Tsipras backed away from the anti-austerity platform that brought him to power seven months ago, said Burwell, who is the Vice President and Director of Transatlantic Relations at the Atlantic Council.

A split in Syriza would likely leave Tsipras’ faction of the party too weak to govern on its own, she added. In such an event, the fate of the bailout will come down to the coalition partners in the next government.

Tsipras announced his resignation as Prime Minister August 20 and called snap elections, which are expected to be held on September 20. The announcement came on the very day Greece received the first tranche of funds under a $96 billion bailout program Tsipras had negotiated with Greece’s creditors.

Tsipras said he felt “a moral obligation to place this deal in front of the people, to allow them to judge … both what I have achieved, and my mistakes.”

In a vote last week, Tsipras won parliamentary support for the bailout package, but lost the backing of nearly a third of his party’s Members of Parliament.

“While there will be some people talking about instability [in the weeks leading up to the vote], what most will hope is that the Tsipras part of Syriza, which has now made the deal, will come back into office either strong enough and on its own, or potentially with the support of New Democracy and other centrist opposition figures,” said Burwell.

Vassiliki Thanou-Christophilou, the President of Greece’s Supreme Court and an ardent critic of the bailout, will head a caretaker government in Athens.

Fran Burwell spoke in an interview with the New Atlanticist’s Ashish Kumar Sen. Here are excerpts from our interview:

Q: What is the significance of the timing of Tsipras’ decision to call early elections?

Burwell: This call for snap elections is not really unexpected because Tsipras was not supported by all of his party in the vote that they had to accept the bailout arrangements with the eurozone creditors. He had to be supported by the more centrist opposition parties. Syriza has been a broken party, or a divided party, since then.

In the last week, we have seen money being issued so that Greece can pay back some debts that were owed on the 20th [of August]. The European Central Bank has also announced that it will provide some liquidity for Greek banks.

We have breathing space right now. Everything is going as it was expected to go, but there are more reforms that will have to be done, and the Prime Minister really needs stronger support to do that.

Tsipras waited until the money started to flow in this new bailout and everything was secured. The Greeks have the money now that will get them through about three months. The election will be September 20 and then there could be a couple of weeks before a government is formed. If there is good timing, this is good timing!

Q: What could be the impact of this period of political uncertainty?

Burwell: For those in the eurozone who are upset with the Greeks and critical of the Greeks, they will continue to be so, but I think that everyone recognizes that Prime Minister Tsipras has made a large shift in what he was willing to support. He walked to the brink and saw that he could not jump off, so he has turned back to accept harsher demands from the creditors than he would have had had he agreed earlier.

While there will be some people talking about instability, what most will hope is that the Tsipras part of Syriza, which has now made the deal, will come back into office either strong enough and on its own, or potentially with the support of New Democracy and other centrist opposition figures. It’s not clear that they would be willing to cooperate in that way, but we will probably not know that until after the election.

Q: Would being part of a coalition make Tsipras’ job harder?

Burwell: That depends on whom the coalition partners are. Right now, having Independent Greeks in the coalition makes it harder because it is not clear that they are committed to staying in the eurozone. Key members of that party do not agree with the terms of the bailout.

I expect we will end up with a split in Syriza and the left platform of Syriza will become a different party. That would leave Syriza too weak to continue on its own.

I expect Prime Minister Tsipras will go to the country and say, “I protected our interests. You know me. I look out for us. Even though this was not the deal I wanted, this is the best deal we could get. Lets move forward.” He is a very charismatic person. It is clear through these discussions over the last couple of months and the referendum [on July 5] that the Greek people want to support him. Whether there are still enough who do is an open question.

It is possible he can win enough seats so that his version of Syriza can form a government.

Q: Tsipras came to office opposing austerity. Over the course of the past few months he has done a U-turn on that position and accepted some harsh austerity measures as demanded by the creditors. Has he been hurt by this change of position?

Burwell: That is not clear at all. He does not seem to be significantly damaged in his public support. There is a certain logic that in saying that someone who said they would never agree to X, Y, and Z and then they turn around and agree to something that is tougher than X, Y, and Z should have lost the confidence of the people, but politics is not about logic. It is much more emotional and he is very good at playing on that.

Q: What are the implications for Greece and the bailout if Tsipras loses in the election?

Burwell: It depends on how he loses. If New Democracy or New Democracy and PASOK (Panhellenic Socialist Movement), the old guard, should come into office they will continue with the bailout as agreed.

The risk is that nobody wins and we have more people voting for the left part of Syriza and Independent Greeks rejecting the deal, and there is no way to get a government and we drift beyond three months. After about that time they will have to show more agreement on reforms in order to get the next tranche of money.

Image: Greek Prime Minister Alexis Tsipras arrives at his office in Maximos Mansion in Athens, Greece, July 13. Eurozone leaders agreed on a roadmap to a possible third bailout for near-bankrupt Greece July 13, but Athens must enact key reforms this week before they will start talks on a financial rescue to keep it in the European currency area. (Reuters/Jean-Paul Pelissier)