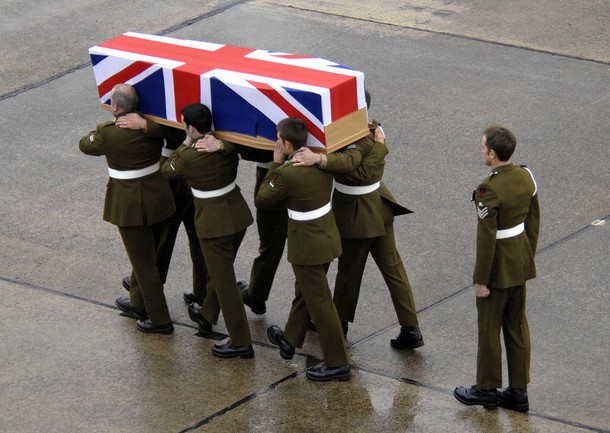 Today it was announced that six British soldiers serving in Afghanistan are missing presumed dead. Five of them were serving with The Yorkshire Regiment, my own county regiment, and the other with the Duke of Lancaster Regiment. My heart goes out to the family and friends of the fallen. They were part of a sustained British effort that stands second only to that of the United States in its commitment to bring peace to the people of Afghanistan. Today’s sorry tally takes the number of British soldiers killed in Afghanistan past the 400 mark since British troops first deployed in 2001.

In the House of Commons today Prime Minister Cameron paid fitting tribute to the men. He also re-iterated the determination of his government to maintain the commitment of British troops to Afghanistan prior to the planned drawdown of combat forces at the end of 2014. Prime Minister Cameron also reaffirmed the three reasons for the continued presence of British troops in Afghanistan: to prevent the Taliban returning to power in Afghanistan; to prevent Afghanistan from once again becoming an ungoverned space for terrorists to exploit; to keep violent Islamism at strategic distance from Britain.

My support for Britain’s troops is absolute. For much of the past ten years I have worked on Afghanistan, I have been to Afghanistan and I believe passionately that Afghans be afforded every opportunity to live at peace with each other and their neighbours. However, in honour of my fellow Yorkshiremen I must warn the Prime Minister that he needs to make a much better case for the continued sacrifice of our young men. He can no longer continue to trot out now tired mantras to justify the sacrifice.

First, the claim that Britain’s troops are fighting and dying in Afghanistan to keep Islamism at strategic distance is hard for the British people to accept when in the past decade over a million people have been permitted to enter the United Kingdom from some of the most conservative parts of Islam. Second, Afghan President Karzai yesterday welcomed “guidelines for women” from the Ulema Council which he funds. Comprised of senior clerics the Council demanded that women must henceforth wear headscarves, be permitted in public only if escorted by male family members, and forbidden to work alongside men. If brought to pass such restrictions would undo much of the progress made since 2001. The British people will not understand the sacrifice of British forces if all they are doing is keeping Afghanistan warm for the post-2014 return of the Taliban. Third, my sources tell me that President Karzai and much of his senior cohort are preparing for a swift exit from Afghanistan should things turn ugly. It needs to be made very clear to President Karzai that he can expect no taxpayer-funded safe haven in London. There can be no Mayfair apartment if he fails.

Britain’s armed forces, working within NATO and with American and other allies, have achieved much this past decade. Unfortunately, however effective a military campaign, whatever the number of Afghan soldiers and policemen trained, it will be as nothing if the political strategy fails. Indeed, the only purpose of military campaigns is to create the conditions for a just political solution. The Talibanisation/Pashtunisation of the Afghan Government would dishonour our troops.

Next week in Washington Prime Minister Cameron will meet President Obama. There would be no better tribute to the fallen of both America and Britain than for President Obama and Prime Minister Cameron to re-state clearly their political strategy between now and end 2014. Specifically, we the British people need an urgent answer to two simple questions; what is the specific political objective you seek in Afghanistan and how do you intend to achieve it? The answer is now not at all clear. You need to make it so.

In honour of our Yorkshire fallen – God’s Own County!