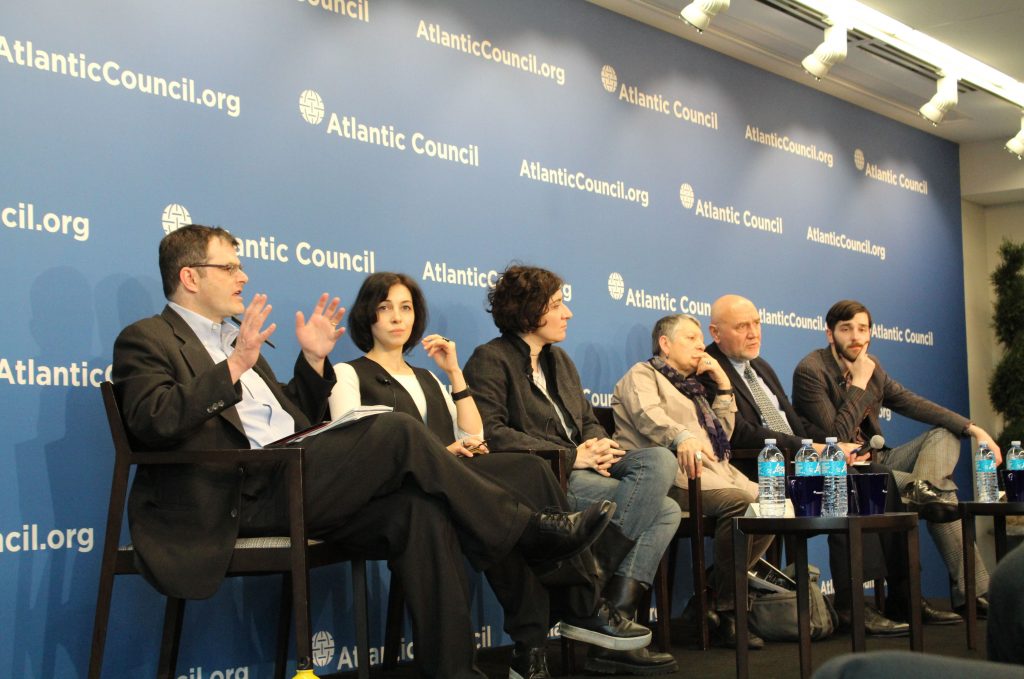 Intellectuals in Russia today suffer a fate that they consider to be worse than death—being forced to remain silent.

“Instead of killing us they offer to move us to the zone of complete silence,” said Ilya Danishevsky, Chief Editor of the Vremena Publishing House. While some may view this as a “more humane approach,” it is a fate that writers cannot accept, he added. Danishevsky works closely with authors who challenge the official discourse.

“We do not say the government needs censorship to prevent us from publishing our books. One doesn’t need to censor what does not exist,” Danishevsky said in Russian through an interpreter.

Danishevsky was part of a panel of Russian writers hosted by the Atlantic Council and PEN America on January 28 that discussed, among other things, the state of freedom of expression in Russia today. Lyudmila Ulitskaya, best-selling author and winner of the Simone de Beauvoir Prize; Maria Stepanova, a poet and former Editor-in-Chief of OpenState.ru; and Anna Nemzer, a novelist and Editor of TV Rain (Dozhd) were also part of the panel. Scott Stossel, Editor of the The Atlantic magazine, moderated the discussion.

Stepanova said it is important for the West to turn its attention back to Ukraine, from which Russia annexed Crimea in 2014 and where it has since supported separatists in the east. Her colleagues in Ukraine are “suffering from a state of partial visibility,” she said. “They are standing in the darkness wondering what has happened.”

Freedom of expression has become an endangered commodity in Russia under President Vladimir Putin. The latest example of censorship surfaced earlier in January when Valery Fokin, the award-winning artistic director of St Petersburg’s Alexandrinsky theater, accused the Russian Culture Ministry of vetting plays.

“The government keeps shutting down independent media, independent TV channels, and the area where independent media is still allowed is shrinking,” said Ulitskaya noting, however, that there is a flip side to censorship. “It provokes a certain additional interest in the literature,” she said in Russian.

Nemzer pointed to the dangers of censorship. “In my everyday work, I am dealing with history and historical memory, and I can see how the denial works, how it ruins everything,” she said.

Attacks against journalists in Russia have become all too common. Fifty-six journalists have been killed in Russia since 1992, according to the Committee to Protect Journalists. Among the most prominent of the victims is Anna Politkovskaya, a critic of the Kremlin’s actions in Chechnya, who was shot dead in her Moscow apartment in 2006.

“Russia’s social and political climate is a comedy, but with quite an unexpected ending. You never know what is going to happen next, and that is what it is making it quite scary,” said Stepanova.

The panelists, however, said they did not feel in any physical danger while doing their jobs. Stossel asked them if they worried that once back in Russia they could face serious consequences over their visit to the United States.

To assume more intimidation is to make the mistake of thinking the “regime is too primitive in dealing with us,” said Danishevsky. “We live in a system where the clear delineation of cause and effect is missing.”

“The biggest problem with Putin was he was never looking for love, all that he wanted was that people would be afraid of him,” said Danishevsky. “And when we hear these questions here in the United States, we understand that he has achieved his goal.”

The panelists said it is also a mistake to equate Russia, and all Russians, with Putin. Danishevsky was struck by how often Americans perceive Russia and Russians as a “synonym for the word Putin.” The priority should be to make a distinction, he said.

“The most important thing is the understanding that there is no such thing as a monolithic Russia,” he added. “This is a huge country with lots of people, all of them have different ideas, different wishes, different thoughts.”

Ulitskaya said she was among the “14 percent” of Russians who are not excited about Putin, but she said in that group there are different reasons for opposition to the Russian President. On the other hand, those who support Putin “all think the same way,” she added.

Stepanova described her relationship with Russia as similar to a Facebook status update: “it’s complicated!”

“Being frank, I have to admit that, ‘Yes, I love it,’” she said of Russia. Other than those nationalists who loudly proclaim their love for “Mother Russia,” Stepanova said, “Someone has to love it from the other side, and I do.”

Image: From left: Scott Stossel, Editor of the The Atlantic magazine, moderates a panel discussion with Anna Nemzer, a novelist and Editor of TV Rain (Dozhd); Maria Stepanova, a poet and former Editor-in-Chief of OpenState.ru; Lyudmila Ulitskaya, best-selling author and winner of the Simone de Beauvoir Prize; and Ilya Danishevsky (far right), Chief Editor of the Vremena Publishing House at the Atlantic Council on January 28. An unidentified interpreter is between Ulitskaya and Danishevsky. (Atlantic Council)