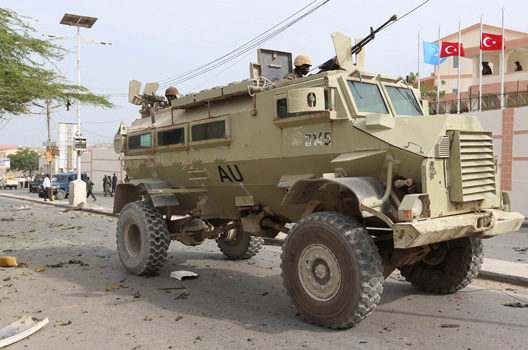 The deadly bombings in Mogadishu, attributed to, yet not claimed by al-Shabaab, highlight the need for a new strategy from both US forces and the Somali government to counter violent extremism as militant groups adapt to increased US military action, according to an Atlantic Council analyst.

“The weekend’s attacks highlight the limits of the military assistance [that the Somali government] has received,” said J. Peter Pham, vice president and director of the Atlantic Council’s Africa Center. “As the enemy has shifted, so too must the emphasis now move to building up police and intelligence capacities.”

However, this is not a call for an increased US role in Somali state-building. “We need to recognize that what we can realistically do is minimize the threat that al-Shabaab and other militants can pose to regional security,” said Pham, adding: “What we cannot do is make Somalia ‘work’—only Somalis can do that.”

On October 14, two truck bombings in the Somali capital of Mogadishu killed over 300 people and wounded hundreds of others in the deadliest single attack in the fragile nation’s history. As rescue workers clear the scene, the death toll continues to rise.

The Somali government has attributed the attack to al-Shabaab, an al-Qaeda-linked militant group which has carried out a number of similar bombings in Somalia, killing 723 in 2016 alone, since it infiltrated the country in 2007. While the group has not yet claimed responsibility for the October 14 attack, large truck bombs have been its method of choice in the past.

US President Donald J. Trump has increased commitment of US forces and airstrikes to aid the Somali government’s counterterrorism efforts. US Special Operations forces have launched fifteen airstrikes against al-Shabaab since the outset of 2017.

“The horrific twin attacks by al-Shabaab underscore a key truth about the terrorists,” said Pham: “Time and again throughout its history, the al-Qaeda-linked militant group has shown itself to be remarkably resilient, adapting to the shifting strategic and political landscape of Somalia and its neighborhood.”

Issuing a statement condemning “in the strongest terms,” the attacks on October 14, the US Mission to Somalia claimed that “such cowardly attacks reinvigorate the commitment of the United States to assist our Somali and African Union partners to combat the scourge of terrorism to promote stability and prosperity for the Somali people and their regional neighbors.”

However, according to Pham, increased airstrikes may prove insufficient. “Despite the recent setbacks [al-Shabaab] has suffered in terms of airstrikes by the United States and defections from its ranks—both of which indeed have measurably weakened it, but not entirely wiped it out—it has shifted once again, moving from a posture of insurgency to increasingly more lethal terrorist operations,” he said.

The group has steadily lost territory since 2011, but has revamped its terror attacks on the crowded Somali capital. According to Pham, the attacks over the weekend are the thirty-fourth time a car bomb has been detonated in the Somali capital this year.

These violent operations are “aimed at undermining the modicum of security that has slowly returned to Somalia for the first time in years,” said Pham.

Somalia has struggled to re-establish a secure state and governance structure since the collapse of its central government twenty-five years ago. Improvements have been made under the new government of Somali President Mohamed Abdullahi Mohamed such that “the current regime probably enjoys the best prospects of any Somali entity in a long time,” said Pham. However, the persistence of al-Shabaab and the scale of the recent attacks demonstrate the level of work left to do in order to make Somalia more secure.

While improved governance in Somalia could advance counterterror efforts, Pham insisted that “the role of the United States and its allies is not to nation-build in Somalia. That is the responsibility of the Somalis themselves.”

“However,” he added, “it is… in the interest of the United States and other international partners to support—to the extent that they demonstrate an effective capacity—those national or regional entities in Somalia which stand opposed to our common enemies and can thus contribute to local and regional security.”

While responsibility for stabilizing Somalia should not fall with the United States, Somalia cannot do it alone. “The current Somali government is not without its defects,” said Pham, “and the international community needs to be very clear-eyed about that reality and factor in the limitations of what the government can realistically be expected to accomplish.” According to Pham, increased and revised strategic counterterror efforts from both Washington and Mogadishu are necessary in order to effectively counter the increasingly violent insurgency of al-Shabaab.

Image: Soldiers from the African Union Mission in Somalia (AMISOM) drive their armoured personnel carrier past the scene of a suicide car explosion in front of the SYL hotel in the capital Mogadishu on January 22. The Somali Islamist group al-Shabaab claimed responsibility for a bomb attack at the gate of the hotel where Turkish delegates were meeting. (REUTERS/Feisal Omar)