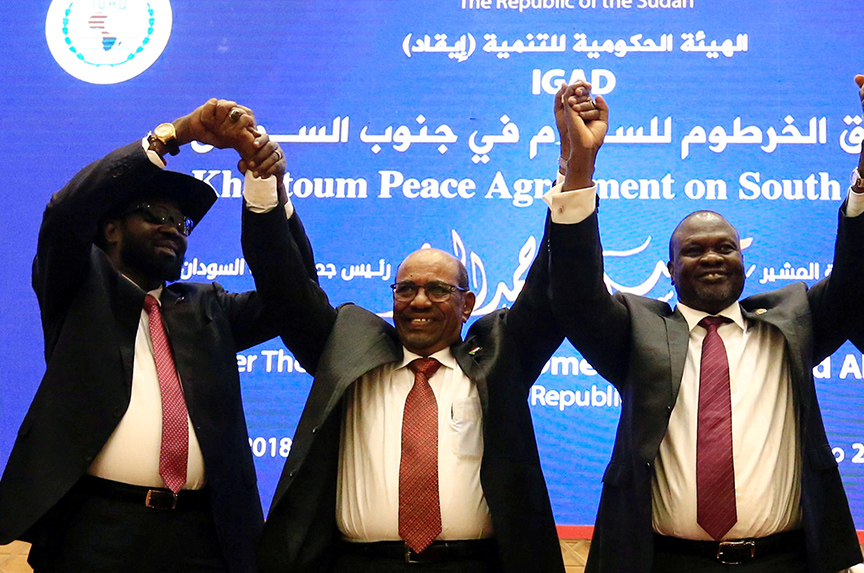 South Sudanese President Salva Kiir (left), Sudanese President Omar al-Bashir (center), and South Sudanese rebel leader Riek Machar celebrated after signing a truce in Khartoum, Sudan, on June 27. Kiir and Machar signed a deal on September 12 that seeks to end a five-year-old war in which tens of thousands of people have been killed. The deal also calls for elections to be held in three years. (Reuters/Mohamed Nureldin Abdallah)

The so-called peace deal between South Sudan’s warring parties is in fact a “desperate play” by the country’s two main political actors to fend off international sanctions and extend their hold on power, according to J. Peter Pham, director of the Atlantic Council’s Africa Center.

South Sudan’s president, Salva Kiir, and his main political rival, Riek Machar, signed an agreement in Addis Ababa on September 12 that attempts to end the country’s five-year civil war. Tens of thousands have been killed and millions displaced in the conflict that erupted as a result of the Kiir-Machar rivalry.

“Most of the key issues that have been at the heart of the conflict have been ambiguously addressed—if they have been addressed at all,” said Pham.

Expressing skepticism about the peace deal, he suggested that the United States consider imposing sanctions on Kiir and Machar if there is to be any real possibility of breaking the cycle of violence in South Sudan.

“The only way we are going to move to peace is to have sanctions that target those most responsible for the ongoing conflict, the networks by which they make their money exploiting the war economy, and then delegitimizing and marginalizing them as actors,” said Pham.

There is plenty of reason for skepticism about the prospects for peace in South Sudan.

South Sudan gained independence from Sudan in 2011 after more than two decades of civil war. In December of 2013, the world’s youngest nation was plunged back into a familiar cycle of violence after Kiir accused his vice president, Machar, of plotting to overthrow him. US officials and a team of African Union investigators separately found no evidence of such a plot.

In 2015, Kiir and Machar appeared to set aside their differences and signed a peace agreement. That deal fell apart the next year after clashes between Machar’s forces and those loyal to Kiir left hundreds dead in Juba.

More recently, on June 27, 2018, Kiir and Machar agreed to yet another peace agreement that committed them to a “permanent ceasefire.” That deal lasted all of six hours. The pair then signed a “final ceasefire and power-sharing agreement” in Khartoum on August 6.

Under the terms of the deal signed this week, Machar will once again take the role of first vice president under Kiir. A transitional government is supposed to be established in eight months followed by elections in three years.

In May, US President Donald J. Trump’s administration issued a sternly worded statement in which it expressed displeasure with the government in South Sudan and announced the start of a comprehensive review of its aid programs to that country. The White House statement said, the leaders of South Sudan had “squandered this partnership [with the United States], pilfered the wealth of South Sudan, killed their own people, and repeatedly demonstrated their inability and unwillingness to live up to their commitments to end the country’s civil war. The result is one of Africa’s worst humanitarian disasters.”

Pham suggested that the Trump administration conduct a thorough review of its political relationship with the government in Juba.

J. Peter Pham discussed the latest development in South Sudan in an interview with the New Atlanticist’s Ashish Kumar Sen. Here are excerpts from our interview.

Q: Salva Kiir and Riek Machar have signed what is being described as a peace deal. Haven’t we been down this road before?

Pham: What was signed today was not a peace deal. It’s being labeled that, but essentially it is nothing more than a desperate play by two people who between them have ruined the prospects of the world’s newest state for at least a generation. It is simply a ploy to avoid what is inevitable, which is sanctions on them and their henchmen and ultimately the political marginalization of both of them as the only way forward for the long-suffering South Sudanese people.

Pham: This latest agreement is nothing more than a rehash of the deal that these same two gentlemen—and I use that term loosely—signed three years ago. That earlier accord spectacularly fell apart in July of 2016 leaving Riek Machar to flee on foot into the Democratic Republic of the Congo as Salva Kiir tried to murder him.

Under this deal, too, Salva Kiir remains president and Riek Machar is first vice president again. Most of the key issues that have been at the heart of the conflict have been ambiguously addressed—if they have been addressed at all.

Q: Riek Machar has yet to return to Juba as he is worried about his safety. What will it take to bridge the trust deficit between the two sides?

Pham: I don’t think that deficit can be bridged. But Riek has very few other options. Eventually he is going to go back. As Yogi Berra said, it’s déjà vu all over again.

In 2015, Kiir and Machar reluctantly signed a deal in the same city—Addis Ababa—and then it took months of back-and-forth negotiations and quibbles over how many people would accompany who, when, and where before Riek came back and then shortly thereafter things fell apart.

There is no guarantee that we will even get that far this time. Even if we do, the newfound “peace” is not sustainable because the agreement  does not address the fundamental issue, which is the rivalry between these two gentlemen that has torn the country apart. It has been a fight over resources and the power that can be purchased by that wealth. What, then, can this deal do? One, Salva and Riek hope it gives them a fig leaf to avoid sanctions, although I don’t think anybody other than the deluded is being fooled; two, it actually incentivizes further conflict because it shows that if you want a seat at the table and a chance to share in the spoils, the best thing to do is create a splinter group and create enough chaos and violence.

The only way to resolve the conflict is, first, Salva and Riek  have to go; both are nonstarters. Things have gotten so bad, the human suffering so appalling, that I am reaching a point where I am personally agnostic as to how they go. Second, whatever settlement emerges must not incentivize people to engage in violence. Third, any agreement, if it is to be sustainable, has to deal with the fundamental issues which are neither addressed in this deal nor in any of the ones which preceded it. There are no checks and balances on the executive in the South Sudanese government. There is no real division of power between the various levels of government. Thus the stage is set for a very tempting zero-sum play for resources, although thanks to their greed these rival factions have reduced the economy to nothing. The only spoils they can divide at this moment are the rents captured from international relief efforts for the South Sudanese people. This is a cruel farce because they created the tragedy and benefited from it and it underscores the need for the review of aid policy which the Trump administration announced in May.

Q: Who will monitor the peace?

Pham: Those details are not spelled out. Even if they were detailed, how is it actually going to be implemented? The political and material resources of the international community are already stretched with the peacekeeping mission that is already there and the massive humanitarian relief effort currently underway. Moreover, this deal talks grandly about reintegration and disarmament, a process that, if done right, is very expensive. As Salva, Riek, and their ilk have destroyed the economy of this country and there was never a tax base to begin with, who is going to pay for all of this? All of this will inevitably be a source of contention and probably how this latest deal is going to fall apart in the coming weeks and months—if it even lasts that long.

Q: Who will control the army?

Pham: The agreement repeats boilerplate language that the president is commander-in-chief of the armed forces. But the fact is that there is no such thing as the South Sudanese armed forces. What is there are a plethora of militias, splinter groups, and ad hoc bands of fighters who usually align themselves into roughly two major factions. The situation is much more akin to a feudal army than it is to the professional military of a modern nation-state. Notionally, Salva Kiir will be commander-in-chief. In reality, he is lucky if he can count on the loyalty of his presidential guard on a good day—that’s why he relies on foreign mercenaries for his personal protection.

Q: On May 8, the White House released a statement denouncing  South Sudan’s leaders. The new agreement keeps the same partners in place in Juba. How should the United States work with this government?

Pham: As many of us have argued and even the US government has said in a White House statement in July, the legitimacy of the current actors is seriously open to question. Between them Salva and Riek have ruined the country, yet now they award themselves several more years in office so as to pick clean what remains of the carcass of the South Sudanese state? Elections were supposed to have been held in South Sudan four years ago. Now the spoilers are giving themselves another three-year extension. This is intolerable! The fact is there is no legitimacy. While it has been clear they do not have electoral legitimacy, it is now more than evident that they also lack the political legitimacy that comes from providing protection, services, and goods for their people.

The only way we are going to move to peace is to have sanctions that target those most responsible for the ongoing conflict, the networks by which they make their money exploiting the war economy, and then delegitimizing and marginalizing them as actors.

Pham: We should certainly look very seriously at it and most certainly look at sanctioning more and more of the networks that permit them to continue this violence. A number of nongovernmental organizations such as Enough have done yeoman’s work laying out some possible options for targeted sanctions. We should also expand the review of South Sudan aid policy ordered by President Trump into a broader review of our policy toward the country as a whole, including whether we will continue to recognize Salva Kiir as the president of South Sudan and the regime he heads as a legitimate government.

Q: What happens if the United States takes away this recognition?

Pham: Then we don’t have to treat them as a government. Delegitimizing them is the first step. Right now they can trade off what is left of the tattered sovereignty of that country. Marginalizing them will not get rid of them instantaneously, but it creates space for other actors, who will probably have a greater claim to legitimacy, to emerge.

Q: Does the United States have a Plan B in South Sudan?

Pham: The American people have been extraordinarily generous with South Sudan both in helping give birth to this country and providing aid that keeps its population alive. Roughly half the population—close to five million people—are displaced thanks to this ongoing conflict. Insofar as the assistance doesn’t inadvertently prolong the conflict, we should as a humanitarian gesture continue to assist those whom we can aid without doing harm by doing so.

What President Trump ordered in terms of an aid policy review needs to be extended to include a political review of the entire relationship.