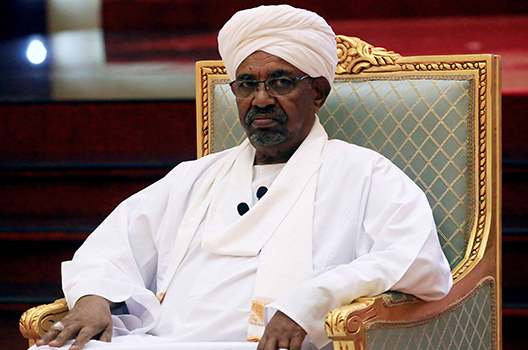 After three decades, Sudan is no longer ruled by Omar al-Bashir, but his ouster in a military coup raises more questions than answers.

Amid anti-government protests that have only grown in intensity, Sudanese Defense Minister Awad Ibn Auf on April 11 announced that Bashir had been taken into custody and that a transitional government administered by the military and led by Auf would run Sudan for a two-year period. Auf also announced the suspension of the constitution and a three-month state of emergency.

“A military interim government for two years may not be what the protesters wanted,” said Mary C. Yates, an Atlantic Council board director who served as special assistant to US President Barack Obama and senior director for African affairs at the National Security Council.

“It is important to learn what role the military will play and what powers the NISS (National Intelligence and Security Service) will retain,” Yates said, adding that it was encouraging “if reports are true” that anti-government protesters who had been arrested have now been released.

Bronwyn Bruton, director of programs and studies and deputy director of the Africa Center at the Atlantic Council, compared the situation in Sudan to that which unfolded in Zimbabwe at the end of 2017 when Robert Mugabe relinquished his nearly-forty-year-hold on power.

“In Zimbabwe, longtime dictator Robert Mugabe was also ousted and replaced by his own henchmen; it hasn’t been a victory for democracy.”

The immediate question in Sudan, Bruton contended, “is whether the proposed interim military government will include some number of moderates and reformers who might be perceived as more credible than Gen. Auf.”

Bruton described Auf, a military chief who served as vice president to Bashir, as a “war criminal and longtime henchman of Bashir.”

“He’s a person who has been deeply implicated in corruption and human rights abuses by the regime and I doubt he will be palatable to the protesters — or to Washington,” she added.

Bashir himself is the subject of two arrest warrants from the International Criminal Court on the charges of committing war crimes and crimes against humanity.

Auf said in a statement that Bashir was being held in a “safe place.” It was not clear whether he would be handed over to the ICC or whether he was being kept in protective custody.

Auf also announced the suspension of the constitution. In light of this announcement, Bruton said it is “not clear, apart from martial law, what form of justice will be used.”

The Trump administration lifted a host of sanctions against Sudan in October 2017. But while Washington and Khartoum have increased their cooperation on counterterrorism, Sudan remains on the United States’ list of state sponsors of terrorism.

In a report in the summer of 2017, the Atlantic Council’s Sudan Task Force recommended reviewing Sudan’s state sponsor of terrorism designation, a review not officially conducted since Sudan was blacklisted in 1993, as part of a rethink of the US-Sudan relationship.

Yates reiterated recommendations by the Sudan Task Force that “we need to get an ambassador nominated and confirmed and in place as soon as possible who will work closely with our allies and international organizations during this critical time.”

“The initial five-track process and current follow-up process should be suspended until we know with whom the US government will be negotiating,” she said. “The process has been an important mechanism for moving the relationship forward between our two countries, but it needs to be paused at this time.”

Bruton said the Trump administration “is in a difficult position because, while it might in principle prefer to see a civilian-led transitional authority in Sudan, very little is known about the Sudanese Professional Association — its membership and funding sources are, understandably, shrouded in secrecy. That’s deeply problematic in a country with deep ties to the Muslim Brotherhood and other Islamist groups,” she said.

The Sudanese Professional Association has been at the forefront of the anti-Bashir protests.

Yates suggested the need for a serious investigation into who is behind the Sudanese Professional Association.

While the Trump administration is positioned to help on economic matters in Sudan by loosening sanctions, “the question is whether they will want to do that without knowing who is going to be leading a transitional government,” Bruton said. “They might also be reluctant to lift the state sponsor of terrorism designation for a government composed of people they do not know.”

The crisis in Sudan is just the latest in a string of crises in the region. To Sudan’s north, the security situation in Libya has been imperiled this week by the leader of the self-styled Libyan National Army’s attempts to seize Tripoli where an internationally recognized government is seated.

“How the crisis radiates in the region is really going to be a function of what happens next,” said Bruton. “If by some miracle a reformist leadership is empowered in the Sudan, and if the political opposition and civil society is permitted to organize and grow strong enough for credible elections to be held at some point down the road, then the impact on the region would be very healthy. If, however, Sudan disintegrates further then the implications could be very severe — for Sudan’s neighbors, but also for Europe, if refugee flows increase,” she added.

Bruton noted that the regional heavyweights and obvious mediators of the crisis — Egypt and Ethiopia — are involved in a conflict over the Nile. However, she also noted a lack of capacity in Washington, Addis Ababa, and in Cairo to deal with the crisis in Sudan.

“I fear that the attention that Sudan deserves is not going to be forthcoming,” she added.

There’s a touch of irony to the fact that Bashir was ostensibly ousted by the military. In 1989, Bashir, at the time a brigadier in the army, led a group of officers to oust the democratically elected government of Sadiq al-Mahdi. He has ruled Sudan with an iron fist ever since.

“As it stands, Bashir’s legacy is one of civil strife and genocide,” said Bruton. “The United States had been attempting to normalize relations with Bashir’s government as a means of encouraging reforms and an eventual, orderly transition. Bashir’s sudden departure — particularly if he is simply replaced by members of his own cabal — poses great risks for stability in the Sudan.”

“There is also the question of whether Bashir will be turned over to the ICC or become a sticking point in discussions with the international community,” said Bruton, noting that in Zimbabwe, Mugabe was given a comfortable pension and allowed to “amble off into the sunset.”

It is unlikely that will happen to Bashir, Bruton said.