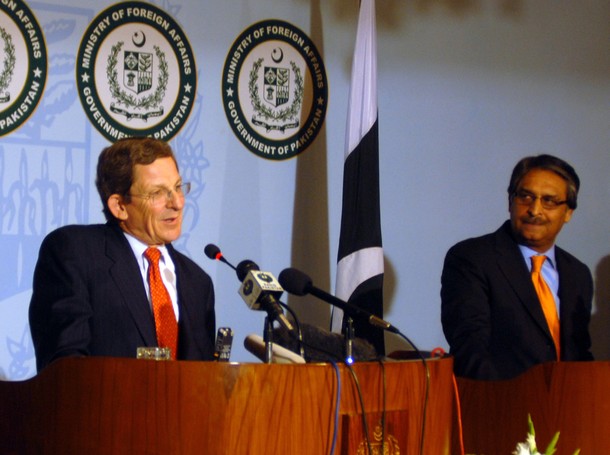 The continuing impasse between the United States and Pakistan over the accidental killing by American forces of 24 Pakistani soldiers last November means Pakistani territory is off-limits for the evacuation of American and NATO military equipment from Afghanistan.

The impasse is the result of America’s refusal to apologize for the incident. Pakistan insists an apology is the only way forward. The United States maintains it will only offer an expression of regret. Besides the fact that the details of the killing in Pakistan are murky, an American apology would quickly become a divisive partisan issue during the Presidential election campaign.

To sidestep Pakistan’s road closure NATO recently announced an alternate route out of Afghanistan. This route passes through some of the most unstable and corrupt countries in the world: the former Soviet Republics of Uzbekistan, Tajikistan, and Kyrgyzstan. The route then traverses Russia, the benefactor of all those “Stans.”

The Central Asian exit plan is not in the best interests of the United States. It will cost the American taxpayer more than twice as much as the Pakistani alternative. Worse, the plan’s success depends completely on the goodwill of Russia and its mercurial Prime Minister Vladimir Putin. Goodwill that he is sure to use as a lever during a series of upcoming negotiations with the United States and its allies: the future of Syria; Egypt and the wider Arab Spring, transit and energy stakes in the Arctic, European missile defense, nuclear non-proliferation, North Korea, and stability operations of the United Nations Security Council on which Russia holds a veto, to name just a few.

The lack of an apology has proven incendiary for public opinion in Pakistan that is turning increasingly anti-American. Numerous attempts at deliberation have gone nowhere. But, as fate would have it, a window of opportunity to break this impasse may now be at hand.

In the last few days the Supreme Court of Pakistan has ruled Yousaf Raza Gilani, the country’s prime minister, legally unqualified to hold his office. A new prime minister will be appointed by the president to serve out Mr. Gilani’s term until the next national elections scheduled for 2013. The leadership vacuum comes amid a growing realization in Pakistan that continued closure of NATO supply lines is not necessarily in that country’s best interests.

The U.S. should seize the opportunity offered by this confluence of events to come up with a creative solution to the impasse. For instance, here is how a roughly analogous situation was defused during the early months of the last administration:

On April Fools Day 2001, an American E-P3 surveillance plane and a Chinese F-8 jet fighter collided over the South China Seas. The E-P3 made it safely to China’s Hainan Island [where its crew was taken captive]; the F-8 tore apart and crashed, and pilot Wang Wei [died.]

A few days later, China’s Ministry of Foreign Affairs called an unusual late-night news conference. Spokesman Zhu Bangzao, his rage clearly visible, declared: ‘The United States should take full responsibility, make an apology to the Chinese government and people, and give us an explanation of its actions.’

U.S. Secretary of State Colin Powell initially responded with equal bluntness: ‘We have nothing to apologize for’…

The impasse was broken after 11 days of intensive negotiations. [U.S.] Ambassador
Joseph Prueher gave a letter to Foreign Minister Tang: ‘Please convey to the Chinese people and to the family of pilot Wang Wei that we are very sorry for their loss… We are very sorry the entering of China’s airspace and the landing did not have verbal clearance’.

Having extracted an ‘apology’ from Washington, Beijing released the 24 American servicemen. In this Chinese view, … [it] had won a major diplomatic victory.

In the end both sides were able to claim they had safeguarded their national interests. The Americans had twice said they were sorry without using the word apologize. The Chinese insisted the Americans had in fact apologized by twice saying they were very sorry to the Chinese people!

Coming as it did when the Bush Administration was still finding its sea legs, the death of a Chinese pilot during the encounter with an American airplane had all the hallmarks of an incident that could quickly escalate into a major United States-Chinese confrontation. Sustained and creative diplomacy prevented this from happening.

Caspar Weinberger, President Reagan’s Secretary of Defense, once told me the United States should be very, very careful about trusting Russia’s then new President Vladimir Putin. “Never forget he has won every important KGB award there is,” the crusty, blunt-speaking Secretary said.

The Obama administration would be wise to heed Weinberger’s advice, and as hard as it may be, get back to the negotiating table with Pakistan.