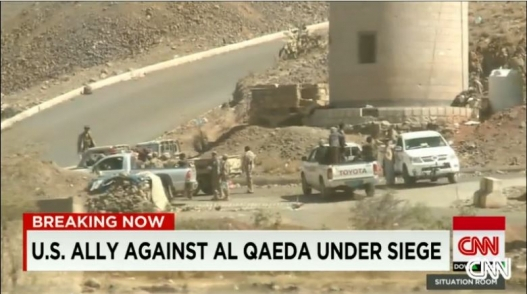 US and Allies Need to Help Build Economy, Governance, and Justice, Analyst Says

The chaos in Yemen underscores that the United States and its allies need a comprehensive security and economic strategy for that country, says Atlantic Council analyst Danya Greenfield. Yemen’s decline, marked yesterday as Shiite tribesmen besieged the presidential offices, has given new room for growth to the Yemen-based Islamist militant group al-Qaeda in the Arabian Peninsula (AQAP).

Three years after Yemen’s Arab Spring uprising toppled a dictatorship, and just one year after the country raised hopes for stability by completing a National Dialogue on its political future, the government has lost effective control, even in Sana’a, the capital.

During Yemen’s gradual slump into disorder, US policy has continued to focus on military action—attacking AQAP personnel with missiles fired from drone aircraft, and supporting Yemeni government counterterrorism forces, Greenfield said in an interview. But it has not given enough attention or resources to address the broader failings of the transition government. Yemen has failed to implement steps agreed on in the National Dialogue, allowing increasingly frustrated Yemenis to be drawn in by AQAP militants, the Shiite Houthi rebels, and southern secessionists, according to Greenfield, the deputy director of the Atlantic Council’s Rafik Hariri Center for the Middle East.

“We’re not accurately diagnosing the problem and therefore not prescribing the right solution or the right kind of assistance strategy that would really respond to the needs on the ground,” Greenfield said. Her comments updated an Atlantic Council report she co-authored in October with former US Ambassador to Yemen Barbara Bodine. “Any US strategy to counter terrorists needs to address the pervasive lack of economic opportunity, structural unemployment, cronyism, and the inequitable distribution of state resources,” Greenfield and Bodine wrote.

Recently, “the US approach underestimated the threat of the Houthi movement, which poses a much broader security dilemma for Yemeni citizens and the Yemeni government,” Greenfield said in the interview January 20.

The government of President Abdu Rabu Mansour Hadi, which has been allied with the United States against the al-Qaeda faction, appeared to have lost control even of the presidential palace in Sana’a. Information Minister Nadia Sakkaf said the events mark the “completion of a coup.”

AQAP claimed responsibility this month for planning the attack on the Paris office of the satirical magazine, Charlie Hebdo, in which 12 people were killed.

President Barack Obama had cited US counterterrorism strategy in Yemen as a model in speech on September 10, 2014, in which he outlined the US mission against the Islamic State of Iraq and Syria (ISIS).

The US strategy of drone strikes “is not a long-term strategy, but rather just a short-term tactic that has very high costs in terms of our ability to actually protect our own interests both inside and outside Yemen,” said Greenfield.

Q: President Hadi has been a key ally in the US war on AQAP. What’s at stake here for the US?

Greenfield: There is a lot at stake for the United States right now in Yemen. What’s happening is testament to the fact that we haven’t been paying close enough attention to what’s been happening in Yemen over the past six to twelve months.

The Yemeni government and President Hadi have been close partners in the fight against AQAP. The loss of control over government institutions and military units poses grave threats for the United States to be able to collect the kind of intelligence that it normally would and to be able to respond to terror threats that may be emanating from Yemen since it can no longer rely on the operational capacity of Yemen’s security forces. More broadly, the fact that the central government lacks control over considerable portions of territory means that AQAP has much greater scope for its activities, recruitment, and training.

Greenfield: When President Obama referred to the Yemen model as being successful, he was pointing to the effort to train and equip local security forces to respond more effectively to the threats of extremist groups, as well as using targeted assassinations and other kinetic actions to disrupt plots. Yet the ongoing activity of AQAP against Yemeni and foreign targets, and its ability to draw in new recruits and generate new leaders, demonstrates the short-sightedness of this narrow approach.

The primary shortcoming of the current US approach is that it doesn’t effectively take into consideration the underlying political dynamics, tribal affiliations, and ad-hoc alliances that shape the context and allow a group like AQAP to proliferate in a place like Yemen.

It’s unrealistic to think the United States could invest in building the capacity of elite counterterrorism units, without paying attention to the lack of an overall security structure, and assume that they will have ability to combat well-resourced jihadi networks when government forces do not even have a monopoly over the use of force. The US approach underestimated the threat of the Houthi movement, which poses a much broader security dilemma for Yemeni citizens and the Yemeni government.

We’re just focused on one tiny little slice of what plagues Yemen on a day-to-day basis, and therefore have not figured out a way to effectively address the underlying political, social, and economic dynamics that lead to the emergence of a movement like AQAP. We’re not accurately diagnosing the problem and therefore not prescribing the right solution or the right kind of assistance strategy that would really respond to the needs on the ground.

The drone strikes and targeted assassinations are a hotly contested issue, but it is safe to say that the actions that we take often have a secondary and tertiary impact that we vastly underestimate in terms of driving tribes and other groups with grievances into the hands of AQAP. So we have a tendency to create more enemies than we are eliminating. This is not a long-term strategy, but rather just a short-term tactic that has very high costs in terms of our ability to actually protect our own interests, both inside and outside Yemen.

Q: So if not drone strikes, what should the US be doing in Yemen?

Greenfield: The approach needs to be twofold.  First, we need a much more comprehensive strategy and long-term commitment to building Yemen’s overall security infrastructure that is not solely focused on the AQAP danger. The central government lacks a monopoly over the use of force — in fact, it is the perhaps the weakest among a crowded field of armed forces — and until that changes, it will be difficult for the United States to depend on local allies to disrupt or dismantle AQAP. We need to design and implement a long-term strategy to build a broader security infrastructure that responds to citizens’ needs and can oversee more effective counterterrorism actions; building intelligence capacity; enhancing operational capacity; and introducing a model where military forces lend allegiance to the state itself instead of a particular commander or figure.

Second, and just as important, is the need to develop a strategy that addresses the underlying drivers and factors that lead people to join these groups. We need to look at the tremendous disenfranchisement, corruption, lack of economic opportunity, and the lack of hope for a brighter future that is driving young men into the hands of both the Houthi movement and AQAP. The United States, along with the other members of the Friends of Yemen, need to leverage considerably more support for a robust economic strategy, not only to meet basic needs and urgent humanitarian gaps, but also to stimulate business growth and new job opportunities.

Q: Do the Houthis want to topple the government?

Greenfield: The leader of the Houthi movement just gave a speech in which he essentially calls for the implementation of the peace agreement that was signed in September, taunts the UN, and says Hadi is not above any law. All of those things seem to uphold the basic premise that Hadi and his prime minister still have the legitimacy to hold their positions, so it seems they’re not actually trying to topple the government, but to control it from behind the scenes. In which case, it will be a very constrained, weak, government that will have its hands tied behind its back.

Q: Has AQAP exploited the vacuum created by the fighting between the Sunni government and the Shiite Houthis?

Greenfield: AQAP has definitely exploited both the security vacuum as well as the increased activity that the Houthi movement has propagated over the last couple of months.

AQAP has been very savvy about amplifying the discourse about a Shia infiltration and the fact that the Houthi movement is pressing forward to take control of traditional tribal areas that are inhabited by Sunni tribes. They have been quite effective in leveraging that in order to gain new recruits and build alliances with tribes to fight against the Houthis.

Q: There have recently been attacks against the Houthis. Is there a danger that this is turning into a sectarian war?

Greenfield: I think it has already evolved into very sectarian tones, which is quite unfortunate because this did not start as a sectarian battle. This is really, in essence, a struggle for power plain and simple.

Unfortunately, what has happened is that both because of Saudi-Iranian tensions in the region and AQAP’s desire to focus attention on the fact that the Houthis are a Shia-affiliated group has really served to exacerbate this sectarian discourse, which was not indigenous to Yemen.

Q: What do the Houthis want?

Greenfield: Their core mandate was really about securing greater rights and access for the Houthis and the broader Zaydi Shiite community, based historically in the north of Yemen. It has only metastasized to a far broader agenda over the past year.

The movement’s founding ideology was inherently a domestic one, and even though their slogan is anti-American, the Houthis were not motivated by jihadi discourse seeking to target American or Western interests.  Even with their more recent aggression and expanded ambitions, I still believe their objective is to expand and solidify as much power and control over resources as they can inside Yemen.

Image: Pickup trucks of Houthi rebels, seen in a CNN report Tuesday, were assembled next to a guards' tower outside the presidential offices and residence in Sanaa, Yemen. (Video screenshot/ CNN/ www.cnn.com)