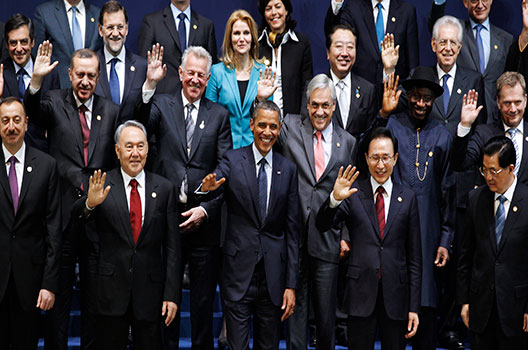 Leaders of nations and international organisations attending the Nuclear Security Summit pose during a group photo taking session at the Convention and Exhibition Center (COEX) in Seoul March 27, 2012. (Reuters/Larry Downing)

This article is part of a series.

For India, nuclear disarmament has always been an article of faith, arising from the country’s vision of a world without nuclear weapons and free of violence. Nonproliferation and arms control measures were the initial phase of disarmament, at best, and instruments of perpetual discrimination, at worst. The saga of India’s recent nuclear policy is one of idealism giving way to pragmatism and coming to terms with the reality that nuclear weapons shall continue to be central to the security doctrines of many nations.

India has come a long way from its total disavowal of the nuclear Non-Proliferation Treaty (NPT) and the Comprehensive Test Ban Treaty (CTBT)—as well as other nonproliferation measures such as Nuclear Weapon Free Zones—by desiring and demanding to be part of the very nonproliferation mechanism that was designed to deny India its right to guarantee its own security. Having defied the system for years and having entered the nuclear club in 1974, India now seeks to secure its position in substance and form.

Logically, the votaries of nonproliferation should have welcomed India into their fold as India is now ready to be in the nonproliferation bodies, even at the risk of discriminating against countries without nuclear weapons, whose cause India had espoused so far. This explains why the United States and three other nuclear weapon states are supporting, if not enticing, India to join certain nuclear and nonnuclear regulatory bodies, including the Nuclear Suppliers Group (NSG), the Missile Technology Control Regime (MTCR), the Wassenaar Arrangement, and the Australia Group. The United States concluded that engagement with India on fissile material and fuel cycle control is important for global nuclear security and decided to expand access to the nonproliferation system to the non-signatories to the NPT.

Certain US experts initiated an informal discussion in 2009 to revitalize the nuclear nonproliferation system by agreeing on a set of criteria governing responsible nuclear stewardship. The idea was to examine whether a country’s concrete policy and behavior can serve as an indication of its commitment, rather than view the institutional nuclear system as a fixed set of treaties and agreements. Could a list of criteria be adopted as the main principle to be used in bringing responsible non-NPT countries into the international nonproliferation system? Furthermore, could a country meeting the criteria be considered equivalent to an NPT-designated nuclear weapon state and would that country be eligible for nuclear trade and qualify to join the NSG and other nonnuclear groups?

The hesitation about opening up NSG for nonsignatories of the NPT was seen as a problem because of the Group’s close links with the Zangger Committee, which applies International Atomic Energy Agency (IAEA) safeguards on nuclear exports. Yet, the United States was clear that it wanted India to be part of the nonproliferation system rather than stay out and enjoy the benefits of the NSG waiver granted in 2008. Washington hinted that by being a member of these groups, India could advance its ambitions for a larger role in global governance.

The offer made by US President Barack Obama during his visit to New Delhi in November of 2010 was a part of the administration’s strategy to bring India into the nonproliferation tent. The formulation in the joint statement was a unilateral offer, rather than an agreed measure by the two sides:

“In addition, the United States intends to support India’s full membership in the four multilateral export control regimes [Nuclear Suppliers Group, Missile Technology Control Regime, Australia Group, and Wassenaar Arrangement] in a phased manner, and to consult with regime members to encourage the evolution of regime membership criteria, consistent with maintaining the core principles of these regimes, as the Government of India takes steps towards the full adoption of the regimes’ export control requirements to reflect its prospective membership, with both processes moving forward together.  In the view of the United States, India should qualify for membership in the Australia Group and the Wassenaar Arrangement according to existing requirements once it imposes export controls over all items on these regimes’ control lists.”

There was no mechanism envisaged to bring this about because India did not show any particular enthusiasm.

India’s reaction to the proposal was positive, but not euphoric. It was left to the United States to take the lead in NSG and MTCR, but there was no apparent interest in joining the Wassenaar Arrangement and the Australia Group. Restraints on conventional weapons and the export of chemicals would not be in India’s trading interests, and New Delhi did not even apply for them. India easily acquired MTCR membership since it was already following institutional guidelines. Washington did not have to lobby for India to receive MTCR status. Its timing was, however, a morale booster for India as it came in the wake of the disappointment over the NSG membership denial in Seoul in June.

Although India has explained that its formal application for NSG membership in May was part of an ongoing effort since the India-US nuclear deal struck in 2005, it appeared that India had suddenly discovered the value of being at the high table of the NSG. India’s more important priorities, such as joining the UN Security Council and Asia-Pacific Economic Cooperation (APEC) now seemed to be downgraded because full-fledged NSG membership would make the Group’s waiver more formal, India would be able to participate in decision-making within the NSG, and it was desirable to secure it during Obama’s tenure. The overenthusiastic push by India caused some disquiet among the smaller members of the NSG, who suspected that there was a deal between India and the United States to dilute the NSG framework.

India’s application was eventually sabotaged by China for political reasons rather than nonproliferation considerations. Having reluctantly agreed to the NSG waiver, China had no reason to block India’s entry into the NSG except that India’s negotiation into the bloc appeared to be a backroom deal between Washington and New Delhi. China broke solidarity with the other four permanent members of the UN Security Council because it saw the move as an effort to strengthen India-US ties and undermine Pakistan. India’s determined effort to isolate China by wooing the smaller member states added fuel to the fire—resulting in a virtual veto by China of India’s membership and the hyphenation of India and Pakistan in this matter. The waiver was unique to India itself; full membership would not materialize without Pakistan’s inclusion.

India, having expressed interest in joining the NSG, should leave it to the dynamics of multilateral processes to find a solution instead of demanding immediate action. The eventual objective should be signing the NPT as a nuclear weapon state, and its joining the nonproliferation bodies should be calibrated and orchestrated to advance that objective and the position taken by the four nuclear weapon states on this issue should be welcomed.

T.P. Sreenivasan is a former permanent representative of India to the International Atomic Energy Agency in Vienna, Austria.