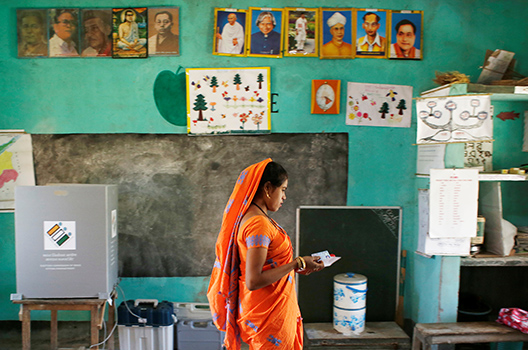 India, the world’s largest democracy, kicked off a five-week-long parliamentary election on April 11. Unlike the United States, where the Democratic and Republican parties dominate, India is a multiparty system, giving voters a choice of candidates.

At the national level, the Hindu nationalist Bharatiya Janata Party (BJP) led by Prime Minister Narendra Modi and the secular Indian National Congress led by Rahul Gandhi, whose father, grandmother, and great grandfather all served as prime ministers of India, are in a fight to lead the country. Modi has served as prime minister for the past five years.

This handy guide will help you make sense of the contest.

Women power: Nearly 432 million of the 900 million eligible voters are women. In India’s first general elections in 1951-52, nearly 2.8 million eligible women voters were struck from the electoral list because many insisted to be identified as a male voter’s mother or wife.

Election Day(s): Unlike the United States, where voters across the country go to the polls on a single day, the election in India is spread over multiple days. This year the election is being held from April 11 to May 19. The results will be announced on May 23.

A bicameral legislature: India has a bicameral legislature, which means its Parliament has a lower house (Lok Sabha) and an upper house (Rajya Sabha). Of the Lok Sabha’s 545 members, 543 are elected and two are nominated by the president of India. The Rajya Sabha has 245 members—233 are elected by state assembly members and twelve are nominated by the president.

How do you win? In order to form a government, a party has to win at least 272 seats in the Lok Sabha. Given the large number of parties, it is a challenge for any single party to win an outright majority. In 2014, the BJP alone won 282 seats, marking the first time since 1984 that a party won an absolute majority. Coalitions, therefore, tend to be the norm. The two major coalitions currently in place are—the BJP-led National Democratic Alliance and the Congress-led United Progressive Alliance.

Numerous parties: Besides the BJP and the Congress Party, five other national parties, twenty-four state parties, and more than 2,000 smaller political parties are registered for the election.

The main issues: In 2014, Modi won in a landslide in part due to his promises to two constituencies that together make up the major chunk of the voting bloc—young Indians and farmers. He promised better job opportunities for younger Indians and higher earnings for farmers. Neither have happened. Unemployment has increased from 5 percent in February 2017 to 7.2 percent in February 2019, the highest since September 2016.

Conditions for farmers have only gotten worse. Modi promised to double farmers’ income by 2022, but increases in production costs and a drop in crop prices have stalled any real progress. Farmers have staged protests over the years, and in recent state elections, the ruling party lost to the opposition party in three large farm states.

Both the BJP Party and the Congress Party have promised greater incentives and rewards for businesses if they create more jobs, which Indians have said is the top concern going into the election. They have also assured higher income for small and rural farmers.

4 million: There are almost four million electronic voting machines being used in this election.

Poll workers: The Election Commission of India oversees the election. It has a staff of only 400. However, millions of others, from different branches of the government and from across all sectors, including teachers, health care workers, administrative assistants, and police officers, are mobilized to help with the elections. This year almost five million people are helping conduct the election. That’s partly why India’s elections take so long. But the challenges are administrative as well as geographical.

Polling booths: According to Indian law, no person should have to travel more than a mile (approximately) to vote. As a result, the Election Commission of India set up a single polling booth for one person in a forest in Gujarat, and another for twelve people in a village in Jammu & Kashmir. Lakshadweep, an archipelago located off the southwestern coast of India, has only forty-nine polling booths for the its 54,266 people. It is the country’s smallest electorate.

Image: A woman leaves after casting her vote at a polling station during the first phase of general election in Majuli, a large river island in the Brahmaputra river, in the northeastern Indian state of Assam, India April 11, 2019. (REUTERS/Adnan Abidi)