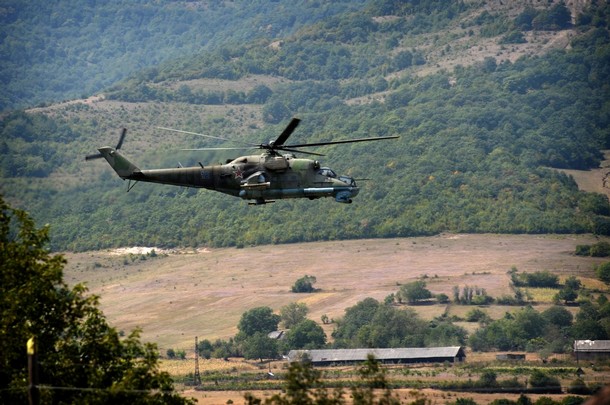 “You were given the choice between war and dishonour.  You chose dishonour and you will have war.”  (Winston Churchill to Neville Chamberlain on the occasion of the Munich Agreement, 1938)

The European Union stepped closer last week to resuming the partnership talks with Moscow that it suspended in the wake of Russia’s August invasion of Georgia.  Never mind that Russia remains in flagrant violation of the EU-brokered ceasefire agreements of August 12 and September 8.  “Indignation is not a policy,” EU High Representative for Common Foreign and Security Policy Javier Solana told a Paris conference.  Business as usual, however, is a policy—the policy Solana wants.  Europe’s High Representative may not care that Georgia’s security is at stake, but he should mind that Europe’s credibility is in jeopardy too.

As Russian tank treads crushed Georgian sovereignty and the Bush Administration abdicated America’s role as global superpower last summer, the EU Presidency stepped into the breach.  French President Nicolas Sarkozy negotiated the August 12 ceasefire agreement and convened an extraordinary EU summit meeting on September 1.  Recognizing the near impossibility of pressuring Russia with any kind of sanctions, European leaders opted for the exceedingly modest but elegantly simple suspension of talks on the Partnership and Cooperation Agreement (PCA).  Sarkozy proceeded with a supplementary ceasefire agreement, and the EU hustled to put over 200 observers on the ground in Georgia by October 1.  Solana had every right to tell the Paris conference “with a straight face that the EU rose to the occasion.”   Now, Europe risks shrinking from the occasion.  Many European governments are anxious to get back to the PCA talks with Russia, with Solana and EU External Relations Commissioner Benita Ferrero-Waldner leading the charge.  Meanwhile, German Chancellor Angela Merkel has been dashing about to clear the way for renewed PCA negotiations with Moscow.  She had an apparent impact on the government of British Prime Minister Gordon Brown in London.  Based on interviews with senior diplomats from Central European EU member states, The Daily Telegraph reported on October 31 that Britain is about to make a “major U-turn” on this matter.

“So it is business as usual,” writes Edward Lucas in the Telegraph, “and what a bad business it is.” On November 10, EU foreign ministers gathering in Brussels will decide whether that verdict is correct.  If they choose to adorn the November 13 EU-Russia Summit with a decision to resume the PCA talks, then the EU-brokered ceasefire agreements, the legacy of the French EU Presidency and Europe’s credibility will all lie in tatters on the road to Akhalgori.

Most people outside Georgia have never heard of Akhalgori, but that Georgian town is now the key to European credibility.

Under the ceasefire agreements, Russia agreed to withdraw its forces from areas of Georgia adjacent to the separatist territories of Abkhazia and South Ossetia and to return to pre-August 7 lines.  Furthermore, says the EU Monitoring Mission statement, “the EUMM shall provide civilian monitoring of parties’ actions, including full compliance with the Six-point Agreement and subsequent implementing measures throughout Georgia.”

Withdrawing to pre-August 7 lines means that all but the peacekeepers that were in those territories before the war must leave.  Instead, in Abkhazia, Russia is manning a former Soviet submarine base at Ochamchire and an air base at Gudauta.  In South Ossetia, it is building three new bases designed to garrison well over 10.000 troops.   But the height of Russian arrogance is showcased across some rugged mountains, outside South Ossetia, in Akhalgori, site of yet another nascent Russian garrison.  Asked what Russian troops are doing there, Anvar Azimov, Russian representative to the Organization for Security and Cooperation in Europe, replied:

There could be no more eloquent statement of Moscow’s Soviet mindset.

Still, Akhalgori, Perevi?  Europeans may wonder whether they are being drawn into a quarrel in a far away country between people of whom they know nothing.  Well, Akhalgori is in a corner of Europe—a corner in whose muddy roads Europe’s international leadership credibility will founder if it resumes PCA talks with Russia without insting upon full compliance with the ceasefire agreements.  This is not because the PCA talks are so intrinsically important, but because it was upon them that Europe took a principled stand just two months ago.  Indignation is not a policy—neither is ignominy, Mr. Solana.