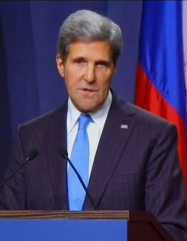 Secretary of State John Kerry, Russian Foreign Minister Sergey Lavrov, and UN Special Representative Lakhdar just emerged from their discussion about a potential Geneva 2 peace conference to make brief, individual statements. Questions were not taken. According to Kerry, if progress can be made on the chemical issue he and Lavrov would likely meet in New York on or about September 28 to try to arrive at a date for the peace conference. Former US Ambassador to Syria and Senior Fellow at the Rafik Hariri Center for the Middle East Fred Hof provides some initial analysis.

Unlike the statements of September 12 in Geneva, today’s appeared to be coordinated. Kerry, for example, in the course of articulating US and Russian concern “about the death toll and destruction” in Syria emphasized “the acts of both sides, all sides that are creating more and more refugees, more and more of the humanitarian catastrophe.”

Although it is literally true that war crimes and crimes against humanity are not the sole province of the Assad regime, the recent report of the international independent commission of inquiry on Syria makes painfully clear the stark contrast between a deliberate, relentless policy of mass terror by the Assad regime and the episodic depredations of jihadist elements, whose very presence in Syria is a gift that keeps on giving to the regime. Clearly the secretary of state was going out of way to avoid dismissing a Russian view of the conflict that is, on its face, untruthful and utterly self-serving.

For his part, however, Lavrov seemed to go out of his way to acknowledge that the chemical tip of the iceberg is far from the entirety of the deadly mass of ice that will absolutely sink any prospect for a political path to negotiations, compromise, political transition, peace, and reconciliation. Lavrov reaffirmed what he claimed was Russia’s support of “Kofi Annan’s initiative,” the main component of which (not cited by Lavrov) was the call on the Assad regime to implement unilaterally several de-escalatory and humanitarian measures so that peace talks might be enabled. Lavrov’s, contribution, therefore seems to be an acknowledgement that a diplomatic initiative involving chemical munitions is not the totality of what needs to be accomplished by Russia and the US to bring about Geneva 2 and eliminate the possibility of US military strikes.

Indeed, Brahimi emphasized that the chemical issue although “extremely important in itself and for itself,” is far from the totality of what needs to be accomplished diplomatically for a pathway to peace to be established. He noted the necessity of “trying to bring together the Geneva 2 conference successfully,” the essence of his own mission.

Yet after a brief hiatus following the August 21 chemical atrocity, it appears the Assad regime’s campaign of mass terror aimed at civilians has resumed. Unless it stops the prospects for a Geneva 2 peace conference are nil. Without strong Russian pressure on Assad the prospects of it stopping as a result of a regime decision are likewise nil. Time will tell whether or not Lavrov’s remarks presage a genuine effort on Moscow’s part.