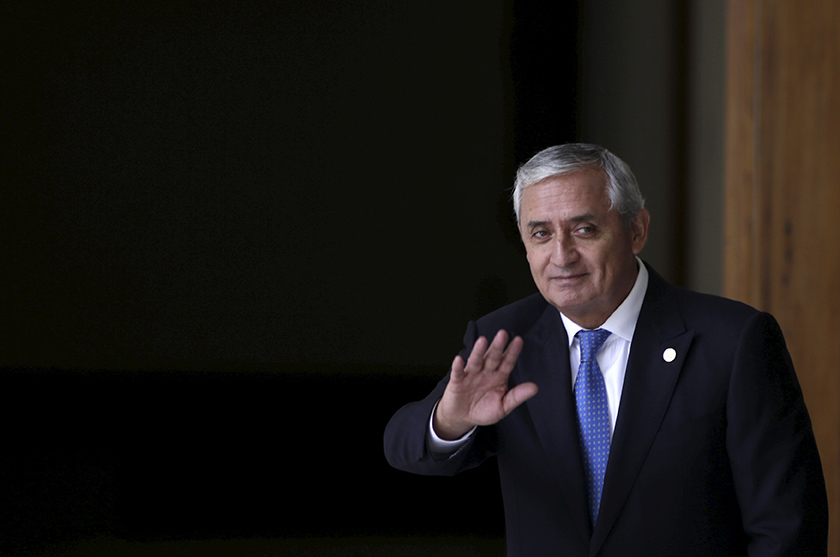 Guatemalan President Otto Pérez Molina’s surprise resignation on September 3 in the face of corruption allegations will likely plunge the Central American nation into a period of further political as well as economic uncertainty with direct implications for US national security, said the Atlantic Council’s Jason Marczak.

Pérez Molina resigned a day after the Guatemalan Congress stripped him of his immunity from prosecution. Hours later he was sent to jail to await the conclusion of hearings into accusations that he had masterminded a scheme to defraud Guatemala’s customs service of millions of dollars. Pérez Molina has denied the allegations.

People from Central America’s Northern Triangle—Honduras, El Salvador, and Guatemala—make up the majority of migrants crossing into the United States from Mexico.

“Political instability and economic challenges push migrants to look for opportunities outside the country, so the stability of Guatemala is directly tied to US national security,” said Marczak,Deputy Director of the Adrienne Arsht Latin America Center at the Atlantic Council.

Instability in Guatemala could also put at risk millions of dollars that the Northern Triangle countries are seeking from the United States.

“The House [of Representatives] is looking for any excuse to deny the appropriations request from [President Barack Obama], or to change the terms so that it is strictly security focused and not focused on the other pillars” of the Plan of the Alliance for Prosperity of the Northern Triangle, said Marczak.

“Pérez Molina simply ran out of options. He could have stayed on in power, but it would have been very ugly,” she said.

Jason Marczak and Carmen Munoz spoke in an interview with the New Atlanticist’s Ashish Kumar Sen. Here are excerpts from our interview.

Q: What is the significance of Guatemalan President Otto Pérez Molina’s resignation?

Marczak: President Pérez Molina’s resignation is a victory for the tens of thousands of Guatemalan people who have been protesting in the streets for months against the endemic corruption in the Pérez Molina administration.

It comes after his Vice President [Roxana Baldetti] resigned in the spring and is now detained; and it comes after half of his Cabinet resigned last week when it came to light that the President was the de facto ringleader of a scheme that had robbed the Guatemalan treasury of $130 million a year.

The President’s resignation is an important milestone for Guatemala because the Guatemalan people have long felt disenfranchised from their government and have long believed that they are ruled by a corrupt elite that is beyond the reach of the judicial system. So the resignation marks a victory not only for the people, but also for the rule of law.

It is also a victory that would not have been possible without the help of CICIG (Comisión Internacional contra la Impunidad en Guatemala), the UN-backed commission that has been working since the civil war to help strengthen the judicial institutions in the country.

Q: What impact is Pérez Molina’s resignation likely to have on the presidential elections that take place this Sunday, and on the prospects of other candidates, particularly Manuel Baldizón who has been seen as part of the same corrupt political system?

Munoz: Baldizón is also facing corruption allegations. His poll ratings have been declining. Meanwhile, the ratings of the perceived outsider, Jimmy Morales, have been going up.

Some academics and civil society groups are calling for the elections to be postponed. Guatemala is still a fragile democracy and [the President’s resignation] is a destabilizing event, but it is not yet known what impact it will have on the elections.

Marczak: The elections should proceed on Sunday. What these events have shown is the importance of the rule of law and adhering to the basic tenets of democracy. Changing the election date would be a step backward.

Baldizón has been largely discredited. The other major candidate, Sandra Torres, a former first lady, is put in the category of the ruling class that has long dominated Guatemala. This gives an unprecedented opportunity for an outsider candidate, who, in Sunday’s vote, will be Jimmy Morales.

There will be a runoff on October 25. We are in for a few very difficult months in Guatemala, but they will be less difficult than had Pérez Molina stayed on in power.

His decision to resign was a bold decision. There was no reason he had to resign. He had lost his immunity, but Congress didn’t strip him of his presidential powers. In many ways this was a surprise move and done in the best interests of the country—though surprising that he would do anything in the country’s best interests.

Munoz: The move prevented an institutional showdown because the Attorney General [Thelma Aldana] was calling for his arrest and Pérez Molina simply ran out of options. He could have stayed on in power, but it would have been very ugly.

Q: Will Pérez Molina’s resignation undermine his Vice President, Alejandro Maldonado, who is expected to govern until the new president is sworn in on January 14?

Marczak: The Vice President is basically a caretaker for the next few months. He is essentially powerless. His role is going to be to do whatever he can to ensure political and social and economic stability.

This will be important because Guatemala is heavily dependent on foreign investment. Foreign investors are going to be thinking twice about their current and new investments in light of the instability. Pérez Molina’s resignation provides a little bit more stability than there would have been otherwise, but next few months will be difficult for the Guatemalan economy.

This has direct reverberations for the United States. The majority of unauthorized migrants who cross the US-Mexican border are no longer Mexicans, they are from the Northern Triangle—Guatemala, Honduras, and El Salvador. Political instability and economic challenges push migrants to look for opportunities outside the country. So the stability of Guatemala is directly tied to US national security, as well as that of Mexico, which is a transient country for these migrants.

Munoz: It also has huge implications for Guatemala in terms of funding from the United States. Currently a lot of people [in the US Congress] are calling for money not to be sent to Guatemala given the high level of corruption and political instability.

Marczak: I wouldn’t be surprised if the Salvadorans and the Hondurans played a back-channel role in suggesting Pérez Molina resign to provide greater stability. These three countries are jointly seeking $1 billion for the Plan of the Alliance for Prosperity of the Northern Triangle. Political instability and economic questions in any of the three countries will put at risk any money flowing from the United States to the Northern Triangle.

The House [of Representatives] is looking for any excuse to deny the appropriations request from President Obama, or to change the terms so that it is strictly security focused and not focused on the other pillars of the alliance.

Q: Will the developments in Guatemala have regional implications—in Brazil, for example, where President Dilma Rousseff’s government is facing large protests over corruption allegations?

Munoz: It will not so much encourage more protests, but, especially in Central America, it will lead to calls for UN-backed organizations like CICIG to root out corruption.

Marczak: It will have direct implications for the Northern Triangle. There are corruption investigations ongoing in Honduras as well. The resignation of Pérez Molina is a sign to the Honduran people that loud voices against corruption can actually bring about change. This is a clear indication of the potential of the voice of the people, so we can expect to see mounting calls from Hondurans for greater transparency in Honduras.

Munoz: Percentage wise, there is a smaller percentage of the population protesting in Guatemala compared to Brazil, but what you see in Guatemala is the combination of large-scale protests matched with vigorous legal prosecution. What pushed Pérez Molina to resign was a lack of legal options.

Marczak: In Brazil, people protest on the streets, but there is no reason for President Rousseff to resign if she has not been tied to the corruption allegations. Without any type of legal basis for resignation it doesn’t matter how many people are out on the streets protesting, you can’t throw her out of office just for a lack of popularity.