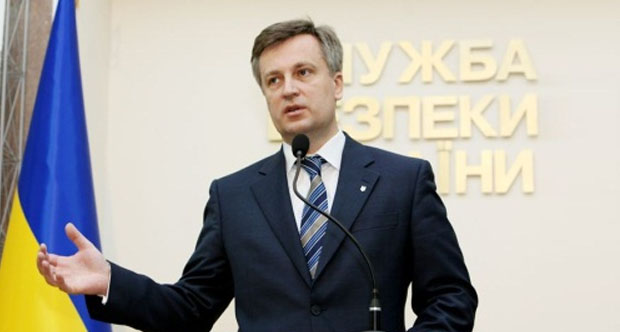 As many as one hundred Russian military intelligence officers and special forces troops are leading the seizures of towns and local governments in Ukraine’s Donetsk province, the Ukrainian intelligence chief said today in his first public account of the crisis.

Russia’s military intelligence agency, the GRU, has spent years building covert networks that its officers now are using to help seize cities such as Slaviansk and Kramatorsk in the north of Donetsk, said Valentyn Nalyvaichenko, the head of Ukraine’s State Security Service (the Sluzhba Bezpeky Ukrainy, or SBU).  Nalyvaichenko, a career diplomat and security official, gave one of the broadest descriptions of the conflict by a Ukrainian official during an online discussion hosted by the Atlantic Council.

As many as thirty special forces troops or officers of Russia’s military intelligence service, the GRU, are working in the Slaviansk region, Nalyvaichenko said. Slaviansk and the adjacent district of Kramatorsk are the strongest point of the Russian operation, he said. Ukraine is seeking in particular to arrest two other GRU officers who are coordinating “the most dangerous and hostile activity” in that region, Nalyvaichenko said. The SBU has named one of those as Colonel Igor Strelkov, who it says also coordinated preparations for Russia’s seizure of Crimea.

The SBU has arrested three GRU officers whom it is interrogating in Kyiv, and twenty-one members of the GRU’s network, Nalyvaichenko said.

Russian-organized gunmen hit a Ukrainian military aircraft flying over Slaviansk today and detained an American journalist for the website Vice News, Nalyvaichenko confirmed during the discussion, in which he answered questions submitted by reporters. While pro-Russian separatists have seized government buildings and organized public demonstrations in other parts of eastern Ukraine, notably Luhansk province, they are “not so hostile, they are not terrorizing, at least, the local community, and they are not conducting crimes or taking hostages every day like is happening currently in … Slaviansk,” Nalyvaichenko said.

James Rupert is managing editor of the Atlantic Council. Irena Chalupa covers Ukraine and Eastern Europe for the Council.

Image: Valentyn Nalyvaichenko, director of the Security Service of Ukraine (by its Ukrainian initials, SBU), speaks at his agency's headquarters (above). He told the Atlantic Council in a video discussion (below) that his agency has arrested Russian officers leading uprisings in eastern Ukraine.