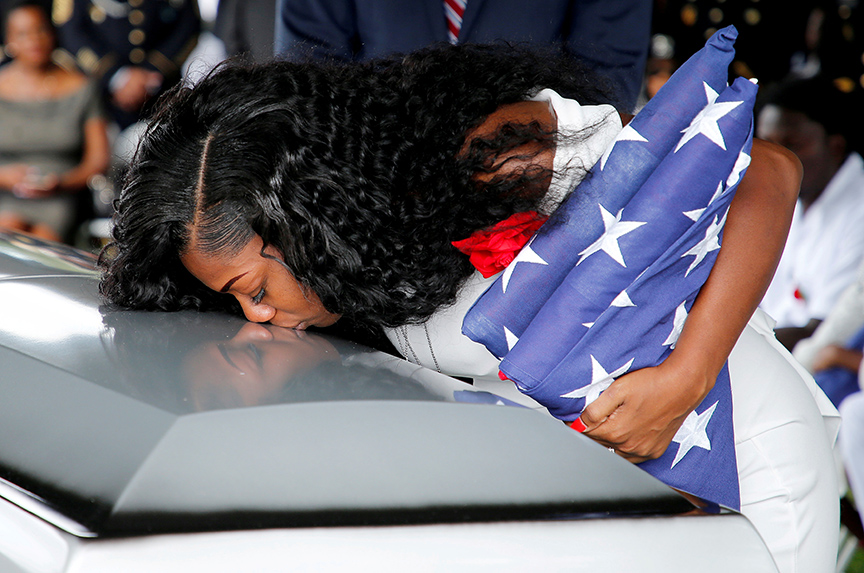 The death of four US servicemen in a militant ambush in Niger on October 4 has exposed the unsatisfactory intelligence-sharing relationship that exists between Washington and Niamey.

Retired Air Force Lt. Col. Rudy Atallah, a nonresident senior fellow in the Atlantic Council’s Africa Center, described this relationship as “not robust.” The consequences have been deadly.

“Whenever you do operations in and around villages outside of your base, not having adequate intelligence is very dangerous. Unfortunately, October 4th proved that and we lost four very brave men because of it,” said Atallah, whom US President Donald J. Trump almost picked to serve as the senior director for Africa in the National Security Council.

On October 4, a small group of US troops and their Nigerien counterparts were ambushed by dozens of militants while returning from an intelligence-gathering operation. Four US soldiers and four Nigeriens were killed.

Atallah said the quality of intelligence has been hampered by the fact that the Nigerien government is not well-informed about developments beyond the capital. “They tend to have a very biased view about what is happening in the area,” he said.

The lack of adequate intelligence “creates issues because whenever you react to a situation you react from a very uninformed standpoint since the bulk of your information is coming from the host nation’s intelligence circle, and most of it is focused in and around the capital versus knowing what is really going on beyond the bush,” said Atallah.

One symptom of Niger’s limited intelligence focus is that the government has turned a blind eye toward developments involving the Fulani and the Tuareg, two tribes to which the extremist Jamaat Nusrat al Islam wal Muslimin (JNIM) has deep ties. JNIM’s Arabic name translates to “The Group to Support Islam and Muslims.” It was formed earlier this year following a merger of multiple militant groups.

“The fact that there are ethnic subdivisions [within JNIM] is interesting because it enables the extremists to have it both ways,” said J. Peter Pham, vice president for research and regional initiatives and director of the Africa Center. “They are part of a larger al Qaeda-sanctioned affiliate, on the other hand they also have an ethnic identity that feeds off geographic or ethnic grievances.”

What are US troops doing in Niger?

After the October 4 ambush, some senior US lawmakers expressed surprise at the fact that US troops were present in Niger.

The Pentagon confirmed that about 800 US troops are in Niger to help the government combat ISIS in the Greater Sahara. US military personnel also run a drone operation in Niger’s capital Niamey and Agadez, and support the Nigerien government in intelligence, surveillance, and reconnaissance (ISR) efforts.

“Niger has been part of US counterterrorism partnerships going back to the George W. Bush administration,” said Pham.

Pointing to the challenges in Niger, Pham said Nigerien armed forces are unable to patrol, much less fully secure, large parts of the country. “People are, essentially, living in ungoverned spaces,” he said.

The attack on US troops took place near Niger’s border with Mali and Burkina Faso. Porous borders and the presence of two major national parks in the region have created empty spaces for the militants to exploit, said Pham.

These security challenges are amplified by the fact that Niger routinely features at the bottom of global socioeconomic indices. Given these conditions, “getting a properly trained military is very much a big stretch for them,” said Pham.

While he acknowledged that they were “certainly not perfect,” Pham praised Niger as an overall good partner to the United States, but said “their ability to do anything is much more limited.” This is why, he added, the United States needs to remain engaged in Niger “because we need to deal with threats before they become larger threats.”

The presence of a mélange of militant groups further complicates the situation in Niger.

Pham has been raising red flags about the situation in Niger since 2013. Testifying before the US House of Representatives’ Homeland Security Committee in March of 2017, he noted that the Nigerian military’s operations against Boko Haram had forced the extremists across the border into Cameroon and Niger.

As ISIS is driven out of its strongholds in Iraq, Syria, and Libya, its fighters are turning to the Sahel where ISIS-affiliated groups are active. In doing so, the militants have created challenges for governments and local populations alike. “That there are very real threats to security in this region is undoubted. You have a very active al Qaeda-linked group and you have a growing ISIS-linked group,” said Pham. “As ISIS is defeated elsewhere that threat is going to grow.”

Militant groups, while not fighting each other directly, are after the same pool of support. Terrorist attacks in the region have become deadlier as a consequence of what Pham described as a “strategic competition” between ISIS- and al Qaeda-affiliated groups to win recruits. While ISIS affiliation could, potentially, lead to more recruits for these groups, there little evidence of material support has emerged thus far.

A number of extremist groups in Africa have pledged allegiance to ISIS as a way to gain what Pham described as the “Good Housekeeping seal of approval.” In their attempt to gain ISIS’ endorsement, these groups have sought to outdo each other by committing even deadlier acts of terrorism. ISIS leader Abu Bakr al-Baghdadi required groups seeking affiliation to show that they were effective, which meant the violence went up, said Pham.

Pham pointed out that it was only in October of 2016, one year after Abu Walid al Sahrawi, former senior spokesman and self-proclaimed emir of a Sahara-based al-Qaeda-linked group, pledged loyalty to al-Baghdadi that ISIS designated al Sahrawi’s group as its “Greater Sahara” division. [The group has been blamed for the deadly ambush on US troops on October 4.] ISIS only accepted al Sahrawi’s “oath of fealty” after his group carried out attacks in the borderlands of Burkina Faso, Mali, and Niger—the very same area where the US forces were recently ambushed—Pham pointed out.

Is the ISIS threat overblown?

Atallah sought to downplay the ISIS threat noting that the group does not have a very big presence in Africa.

“Can they get more territory and recruits? They can, but they are not going to be any more effective than they were in the Middle East,” he said.

Atallah said that al-Sahrawi’s group has not claimed responsibility for the attack on the US troops. He believes that is because it is so small and attracting attention would be detrimental to al-Sahrawi’s long-term ambitions.

It is hard enough to find recruits in the region because unlike North Africans or Middle Easterners, it is very difficult to get sub-Saharan Africans ideologically motivated, said Atallah.

Pham, on the other hand, cautioned that the defeat of ISIS in Iraq, Syria, and Libya may change the calculus. He also added that the neglect of the peripheral areas by some of the African governments in the region created “social as well as geographical ungoverned spaces ripe for exploitation by extremists,” irrespective of whether they operate under the ISIS or the al Qaeda banner.

The October 4 ambush is likely to prompt the Trump administration to take a closer look at its policies in Africa.

Atallah faulted the US approach to the situation in Niger, currently based on counterterrorism and military support. “We can throw as much money as we want at it, but the strategy is not a good one,” he said. He suggested a policy that focuses as much on the social dynamics of the problem as it does on killing terrorists.

Atallah said the Trump administration should prioritize appointing the “right Africanists” to government jobs and then develop new policies. “At present, all we’re doing is following the old policies from the Obama/Susan Rice years and that is not helping at all,” he said.

Ashish Kumar Sen is the deputy director of communications at the Atlantic Council. Follow him on Twitter @AshishSen.

Image: Myeshia Johnson, the widow of US Army Sgt. La David Johnson, kissed his coffin at a graveside service in Hollywood, Fla., on October 22. Johnson was one of four US Army Special Forces soldiers killed in Niger on October 4. (Reuters/Joe Skipper)