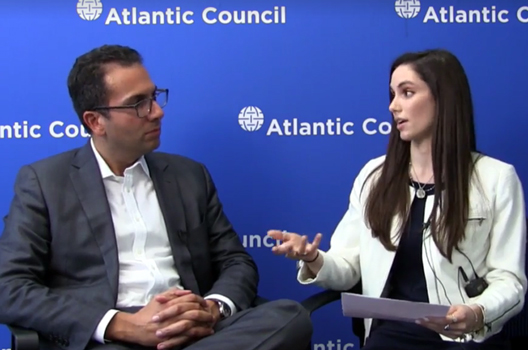 The outcome of its presidential election on May 19 will determine whether Iran is the next nation to succumb to a populist candidate seeking to upend the normative world order, according to an Atlantic Council analyst.

“This is going to be the next test in that wave,” following the election of US President Donald J. Trump and the defeat of French presidential candidate Marine Le Pen, said Amir Handjani, a nonresident senior fellow with the Atlantic Council’s South Asia Center.

Iran’s upcoming election will have tremendous implications for both the future of Iran and the US-Iranian relationship. Incumbent President Hassan Rouhani, widely recognized as a moderate proponent of a rules-based world order, will face off against conservative cleric Ebrahim Raisi, generally considered the preferred candidate of Iran’s Supreme Leader Ayatollah Ali Khamenei.


Following a wave of populism in the West that has resulted in the United Kingdom’s decision to withdraw from the European Union and the emergence of far-right candidates in recent elections, Iran now faces a similar battle. “Raisi… has taken on a populist mantra… and has attacked Rouhani for not delivering to the masses, to the downtrodden… similar to what Mr. Trump campaigned on and what Ms. Le Pen campaigned on,” said Handjani.

Handjani, who is also president of PG International Trading Commodities, joined the New Atlanticist’s Rachel Ansley for a Facebook Live interview on May 17. He discussed the key differences between Rouhani and Raisi, and the impact that the election will have for Iran, both regionally as well as globally.

While both presidential candidates have committed to preserving the landmark nuclear deal that Iran struck with the P5+1 nations—the United States, the United Kingdom, Russia, China, France, and Germany—Handjani said that a Raisi victory will likely indicate Iran’s withdrawal from future diplomatic processes and signal a more uncompromising approach with regional leaders such as Saudi Arabia and the greater Gulf Cooperation Council (GCC).

By contrast, a Rouhani victory will likely signal a more “outward-looking” administration, which will focus on building international trade relationships in order to bolster a weak economy, Handjani said. The economy will, going by campaign rhetoric, have a significant role in deciding the outcome of the election.

Handjani described how Iranian citizens are frustrated with Rouhani’s inability to deliver tangible results from the nuclear deal, despite claiming in his first election campaign that, in the form of the agreement, he held “the key to unlock the economy.” While the deal has maintained support from both the elected government and the “deep,” or unelected, government in Iran, Raisi claims that Rouhani has not protected the citizens of Iran under the parameters of the deal as he should, and, according to Handjani, many in Iran agree.

In light of these various factors, the result of Iran’s twelfth presidential election will determine the role of Tehran as a regional power and will indicate the future dynamic of the already fragile US-Iran relationship. “All eyes will be on Tehran” on May 19, said Handjani.

Kelly Russo is a communications intern at the Atlantic Council.