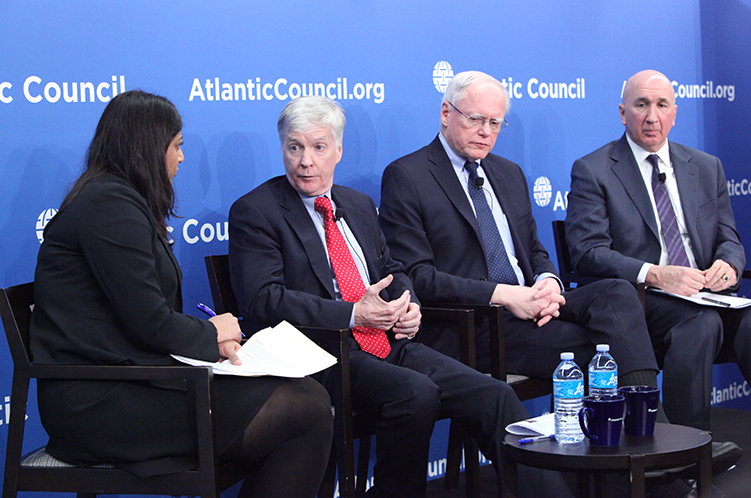 From left: Nussaibah Younis, a Senior Fellow in the Atlantic Council’s Rafik Hariri Center for the Middle East, moderates a discussion in Washington on February 16 with Ryan Crocker and James Jeffrey, both former US Ambassadors to Iraq, and retired Lt. Gen. Michael Barbero, a former Deputy Chief of Staff (Strategic Operations) on the Multi-National Task Force-Iraq. They spoke at the launch of the Council’s Task Force on the Future of Iraq. (Atlantic Council/Victoria Langton)

Iran, Syria, and Russia together pose the biggest challenge in the Middle East today, and any notion that there can be an alignment of the interests of Tehran and Washington is unrealistic, three former US officials said at the Atlantic Council on February 16.

“We have an Iran-Syria-Russia problem right now in the Middle East,” said James Jeffrey, who served as the US Ambassador to Iraq from 2010 to 2012. “That is the number one problem in the whole region, and considering we also have ISIS, that is saying a lot.”

In Syria, Iran and its Lebanese proxy, Hezbollah, have propped up Bashar al-Assad’s embattled regime. Russia, too, supports Assad by conducting airstrikes on the regime’s enemies. This combined military assistance has tipped the balance in Assad’s favor in Syria’s civil war, which is approaching its sixth year.

“The perception in the Middle East is that there is a Tehran-Damascus-Moscow axis in the face of which the United States is passive,” said Ryan Crocker, who served as the US Ambassador to Iraq in the George W. Bush administration. “That is the charitable interpretation. The less charitable interpretation is that it is actually a Tehran-Damascus-Moscow-Washington axis, and that, by our inaction, we are, in effect, accomplices.”

Iran and the P5+1 countries—the United States, the United Kingdom, Russia, France, China, and Germany—reached an agreement in July of 2015 that lifts sanctions on Iran in exchange for the Islamic Republic curbing its nuclear ambitions.

A few months after the deal was inked, Iran accepted an invitation to participate in talks on Syria’s future in Vienna.

“Anyone who thought that the Iran nuclear deal was going to herald a new era of a gentler, kinder Iran in the region is nuts,” said Crocker. “What you’re seeing now in Iraq is the old Iranian playbook that they began to write in the early ’80s” at a time when Iran, along with Syria, created the militant group Hezbollah in Lebanon, he added.

Crocker and Jeffrey spoke at the launch of the Task Force on the Future of Iraq of the Atlantic Council’s Rafik Hariri Center for the Middle East. Crocker is Chairman of the Task Force to which Jeffrey is a Senior Advisor. Retired Lt. Gen. Michael Barbero, a former Deputy Chief of Staff (Strategic Operations) on the Multi-National Task Force-Iraq and a member of the Council’s Task Force, was also part of the panel. Nussaibah Younis, a Senior Fellow in the Hariri Center, moderated the discussion.

Iran and Iraq were at war with each other from 1980 until 1988 when Iran’s Supreme Leader, Ayatollah Ruhollah Khomeini, accepted the terms of a ceasefire agreement. Iran today uses Shia militias to maintain its influence in Iraq. The US State Department has designated one of these groups, Kata’ib Hezbollah (Hezbollah Brigades), as a foreign terrorist organization.

Hadi al-Amiri, the head of one such group—the Badr Corps—takes his marching orders from Iran, said Barbero. Amiri and Qassem Suleimani, the commander of Iran’s elite Quds force, have for many years now had a close working relationship, he added.

“Any notion that [Iran’s] interests [in Iraq] are aligned with ours…and to think that we can work with them and merge our interests is totally false,” said Barbero.

There is a clear distinction between the militias of nationalist sentiment and those under Iranian surrogacy, said Barbero. Iraqi officials are confident that the nationalists are reconcilable, but “the huge concern and the question is: how do you put this genie back in the bottle,” he added, referring to the Iranian-backed militias.

Crocker posited a “provocative hypothesis” on Iran’s role in Iraq: Suleimani, the Quds Force commander, is seeking to achieve what Iran could not in the 1980s—to gain a definitive victory over Iraq by fragmenting it.

Describing ISIS as a “good foil” for Iran to mobilize the Iraqi population and then control that mobilization, he added, “That poisoned chalice that Khomeini famously said he had to drink from in 1988 may now turn into the victory cup for Qassem Suleimani.”

Task Force on the Future of Iraq

The Council’s Task Force on the Future of Iraq convenes twenty-five of the world’s top Iraq experts with the goal of focusing attention on the underlying causes of the conflict, addressing which is seen as vital to the success of the mission to destroy ISIS.

The Task Force will conduct fact-finding missions in the Kurdistan Region of Iraq, Baghdad, and Najaf. Its findings and recommendations will be presented to the next US administration with the intention of focusing the new President’s attention on adopting a long-term approach to the stabilization of Iraq.

“Both the [Atlantic Council’s] Middle East Strategy Task Force and the Iraq Task Force are part of a broader Atlantic Council effort to inject strategic thinking on US foreign policy, with a specific aim to empower the international community and regional players with long-term approaches to respond to the challenges within the Middle East,” Jon M. Huntsman, Jr., Chairman of the Atlantic Council, said in opening remarks.

The Task Force will examine the future of Iraq’s minority Sunni community, prospects for Kurdish independence, ways to improve local governance and economic performance, plans for the reintegration of internally displaced persons, and the challenge of demobilizing Iraq’s many militias.

US role in Iraq

US President Barack Obama, who won his first White House bid largely because of his opposition to the war in Iraq, withdrew US troops from that country in December of 2011 after the Iraqi government of then Prime Minister Nouri al-Maliki refused to give US troops immunity from prosecution.

“The Obama administration did not walk away from Iraq,” said Jeffrey, noting an Iraqi reluctance at the time to pass a Status of Forces Agreement that would give US troops in Iraq legal immunity.

“The problem is, if you do not have boots on the ground…Washington’s ability to do hard things…drops and drops and drops,” he added. “We could have done better after 2012, and we didn’t.”

Crocker maintained that as the United States withdrew from Iraq, it ceded the battlefield to Iran and its proxies in the center and south, and to ISIS in the west.

Obama has since deployed more than 3,500 troops to Iraq at the request of Iraqi Prime Minister Haider al-Abadi, and after the Iraqi government provided US troops immunity from prosecution.

Crocker said ISIS had taken root in Iraq by exploiting the failure of governance and alienation of the Sunni population, largely as a consequence of former Prime Minister Nouri al-Maliki’s policies. “Islamic State is a symptom, it is not a cause,” he said.

The Obama administration put together a coalition of more than sixty countries with a mission to degrade and destroy ISIS in Iraq and Syria. In Iraq, Iraqi security forces have taken the lead in the effort and have retaken some territory from ISIS, including the western city of Ramadi.

“ISIS is such a uniquely evil organization, and while it has many former Baathist officers, it is also, in some respects, an alien force in Iraq,” said Jeffrey. “I am relatively hopeful that if we can get a military offensive going, we will find a way to have some kind of preliminary resolution…but if this is replacing ISIS by an Iranian-dominated Baghdad, you are going to be back in the same mess in the future.”

Barbero said the big challenge in defeating ISIS is finding a way to incentivize the Sunni population to reject the group, but more importantly, buy into a future in Iraq. “I don’t think we can impose that,” he said.

Another important challenge is building the Iraqi government’s capacity to provide essential services, including water, electricity, and sanitation. This challenge has been compounded by the devastation ISIS and the military operations to dislodge it have wrought upon major Iraqi cities.

“What we find [in these ISIS-occupied areas] is just going to exacerbate this lack of basic services and infrastructure, and especially in areas that need it worst—in Sunni areas,” said Barbero. “As you’re trying to convince [the Sunnis] to align themselves with the government in Baghdad, that is an immense challenge that we need to face and take on.”

Besides these constant battles of attrition, corruption is endemic in Iraqi politics. None of the panelists were hopeful that things will be improving on this front anytime soon.

“If the powers that be are making a whole lot of money out of the current system, the incentives for changing that system are few and far between,” said Crocker.

Jeffrey added: “If Iraqis decide that corruption is so bad, that they are going to end it, and they need some advice on how to do that, they know our telephone number.”