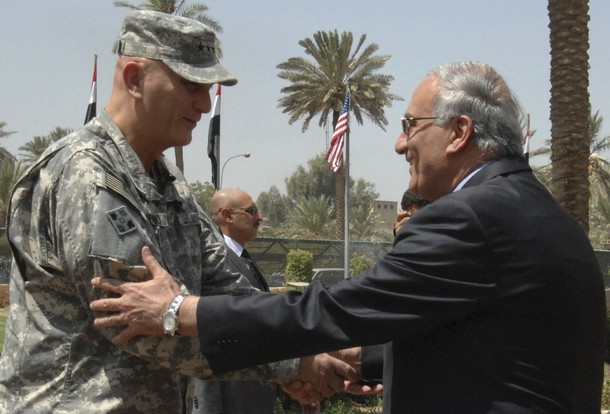 For the second time this decade, combat operations in Iraq are over. It is unlikely that we’ll see President Obama land on an aircraft carrier or drive across Iraq’s border in an MRAP, but superstition should not prevent acknowledging the meaning of restoring Iraq’s sovereignty. Practically speaking, the change from Operation Iraqi Freedom to Operation New Dawn is about two years late since the United States and Iraq signed a Status of Forces Agreement in December 2008. Yet, the trumpeted force reduction this month is an important milestone to reflect on some lessons from the last seven years.

There are no easy exit plans.

In 2003 when the United States declared victory in Iraq by defeating Iraqi regular forces and occupying the country, it expected to transition to either Iraqi nationals like Ahmed Chalabi’s group or the United Nations. Unfortunately, the plan could not be implemented because of legitimacy concerns and insurgent violence that cut short UN efforts there. When Iraq became too dangerous (aided by poor U.S. decisions like disbanding the Iraqi Army), the United States and its allies were left with a choice to abandon Iraq, partition Iraq, or develop Iraq. Fortunate or not, the United States chose to develop Iraq at considerable human and financial costs.

While, it is easy to fault the Bush Administration for invading Iraq under false pretenses, the administration should get some credit for attempting to solve the problems it created. Like it or not, Iraq and the United States now have a special relationship that will continue beyond 2011.

While much has been written about poor post-war planning or ignoring the plans created, most critiques fail to consider the Iraqis who took advantage of the changed security environment. This includes former regime elements that worked hard to undermine post-war stability operations in order to preserve or reclaim lost power. But it also includes formerly persecuted groups that seized upon opportunities to exact revenge for Saddam-era repression or outside groups that tried to make Iraq the center of al-Qaeda operations. It is impossible to know if better post-war decisions or if more troops could have prevented the insurgency that developed, but analyses cannot ignore the harsh realities created by large-scale societal change. Iraqis had a say in their future; some chose violence. Today, they are choosing politics.

In 2005-6, many worried about the defeat of the U.S. military in Iraq. At the time, it looked like the United States would suffer a death by a thousand cuts. Yet, the U.S. military proved to be resilient and responded by developing counterinsurgency doctrine and institutionalizing stability operations. To be sure, the military would have preferred IGOs, NGOs, or other federal employees leading state-building efforts, but Iraq proved to be too dangerous and civilians stayed away. Consequently, the military institutionalized state-building activities, facilitated the growth of economic activities, and promoted civil society. Previously viewed as a distraction to warfighting, Iraq taught the military that state-building activities are as important as traditional military activities.

Elections can confer legitimacy, but not necessarily bring stability.

There were strong advocates for invading Iraq to provoke a democratic transformation in the Middle East, so there was a rush to hold national elections. History should temper enthusiasm for forced democratization, but the more immediate lesson is that it takes time for civil society, political institutions, and a democratic citizenry to develop. Prompt elections after decades of authoritarian rule solidified social divides in Iraq and did not bring the expected stability. As we think about politics in Iraq and elsewhere, an emphasis on national governments should be replaced with an emphasis on developing local governments and federalism.

Partnership with sub-national actors is essential to promoting sovereignty.

In the 1990s, the United States too readily handed off transition to international partners like the United Nations in Somalia and Haiti or NATO in Bosnia and Kosovo. This created the false perception that the international community can administer territories in lieu of indigenous governance. But Iraq teaches that Iraqis hold the key to Iraqi governance to work through their own security, political, and economic challenges. External actors can only enable or disrupt indigenous efforts and not replace them.

We should certainly take note of the milestone created by U.S. troop reductions in Iraq, but from a practical matter, we cannot overlook that there are still 50,000 U.S. military personnel there. These forces are continuing to enable Iraq to make U.S. forces and assistance redundant, which is the overriding national security goal. While over-used, the slogan “when they stand-up, we stand-down” is starting to hold true. It just took a little longer than expected.

Derek S. Reveron, an Atlantic Council contributing editor, is a Professor of National Security Affairs and the EMC Informationist Chair at the U.S. Naval War College in Newport, Rhode Island. The views expressed are his own and do not reflect those of the Navy or the U.S. government.  Photo credit: Reuters.