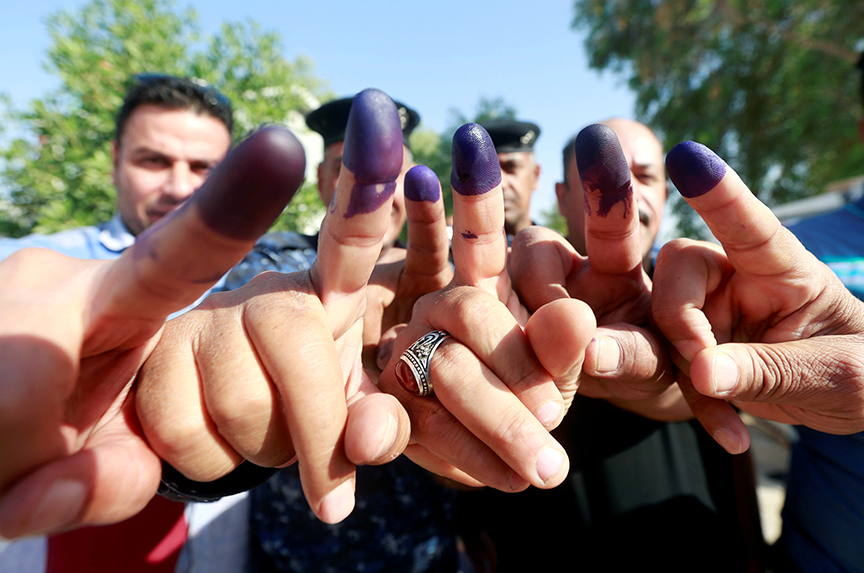 Iraqis will vote on May 12 in their first election since the defeat of the Islamic State of Iraq and al-Sham (ISIS). With nearly 7,000 candidates vying for 329 seats in parliament, no single political alliance is expected to emerge with an outright majority. As a consequence, the days after the vote will be marked by desperate attempts to cobble together a ruling coalition.

Iran-backed Shia militias played a vital role in the ouster of ISIS, and Iran continues to wield considerable influence in Iraq through these groups. Iraqi Prime Minister Haider al-Abadi, however, has maintained a neutral position amid the deepening crisis between Iran and the United States, marked most recently by US President Donald J. Trump’s decision to withdraw from the nuclear deal with the Islamic Republic.

The election will decide the fate of al-Abadi’s policy of neutrality, said Rend Al-Rahim, a former Iraqi ambassador to the United States. “It is going to determine where Iraq positions itself in the geopolitics of the region,” she added.

Al-Rahim spoke in a phone briefing hosted by the Atlantic Council on May 11. She was joined by Ryan Crocker, a former US ambassador to Iraq. Harith al-Qarawee, a nonresident senior fellow in the Atlantic Council’s Rafik Hariri Center for the Middle East, moderated the conversation.

Abadi, who is credited with routing ISIS and building up Iraq’s military, belongs to the Victory Alliance. Despite its optimistic name, the alliance has a tough fight on its hands.

Abadi’s top opponents include former Prime Minister Nouri al-Maliki and Hadi al-Amiri, a former minister of transport who led Shia militias against ISIS. Both al-Maliki and al-Amiri have ties to Iran.

Iraqi political alliances—especially among Shia and Kurds—have fragmented, adding to the certainty that elections will produce no clear winner.

In this scenario, the Revolutionaries for Reform, led by Muqtada al-Sadr, is expected to win enough votes to make the anti-US cleric a key player in coalition negotiations. Al-Sadr’s transformation is particularly noteworthy. In 2004, Al-Sadr’s Mahdi Army fought US troops. He later disarmed his militia and focused on politics.

Crocker and Al-Rahim said the elections are unlikely to produce an overwhelming majority for any list. “There will be a long period of negotiations and give and take,” said Crocker.

Trump’s May 8 decision to take the United States out of the nuclear deal with Iran is likely to be a factor in the Iraqi elections.

Al-Rahim predicted that it would lead Iran to exert greater pressure to ensure that its interests are strongly represented in its neighborhood, which includes Iraq.

Al-Rahim, who is co-founder and president of the Iraq Foundation, said it is important for Iraqis to decide who is best suited to lead their country but it would be good for the United States to have an opinion on this matter as well. “The US can’t impose this,” she said, adding, “It is a very delicate matter…the US often has the kiss of death.”

“On the other hand,” she added, “it is also naïve to imagine that Iraq’s neighbors and regional powers will not have an input.”

Crocker acknowledged that external actors will seek to influence developments in Iraq. However, he added, “We are way past the point where the United States or anybody else should be thinking in terms of what’s best for Iraq from the outside.”

“What’s best for Iraq is for outside powers to let Iraqis get on with the development of their economy and their society,” he said.

Crocker said Iran has meddled in Iraq, but Iraqis will push back.

“Iraq is not a province of Iran and never will be,” said Crocker pointing to the 1980-88 war between the two neighbors.

“There are very definite limits to what the Iraqis will tolerate from their eastern neighbor. If the Iranians overreach, as they have before, I think you are going to see a backlash not from us, from the Iraqis,” he said.

“What Iraqis need from external powers is our non-intervention,” he added.

Turnout in the election will be key. Iraqis are increasingly distrustful of politicians who have by and large done little to address the daily challenges that they face—from fighting corruption to fixing infrastructure. “Every day we see calls to boycott the elections,” said Al-Rahim.

A boycott would hurt Abadi more than it hurts anybody else because the other political groups are more ideologically driven and their base is easier to turn out, said Al-Rahim.

Crocker said the “most dangerous thing that could happen, in my view, would be a significant boycott [and] a low turnout at the polls, because that could cast the legitimacy of the whole process into doubt.”

Al-Qarawee concurred, adding: “A very low turnout would be a danger, especially if it is interpreted as a delegitimization of the political process.”

Image: Iraqi security members showed their ink-stained fingers after voting at a polling station in Najaf, Iraq, on May 10, two days before polls open to the public in a parliamentary election. (Reuters/Alaa al-Marjani)