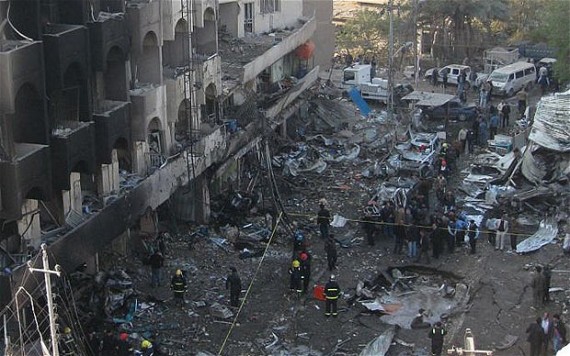 For years, analysts have worried that Iraq’s tenuous hold on stability would collapse upon the withdrawal of US forces. We’re now watching it happen.

A wave of at least 14 bombings ripped across Baghdad Thursday morning, killing at least 60 people in the worst violence in Iraq for months. The apparently coordinated attacks struck days after the last American forces left the country and in the midst of a major government crisis between Shiite and Sunni politicians that has sent sectarian tensions soaring.

The bombings may be linked more to the U.S. withdrawal than the political crisis, but all together, the developments heighten fears of a new round of Shiite-Sunni sectarian bloodshed like the one a few years back that pushed Iraq to the brink of civil war.

There was no immediate claim of responsibility. But the bombings bore all the hallmarks of al-Qaida’s Sunni insurgents. Most appeared to hit Shiite neighborhoods, although some Sunni areas were also targeted. In all, 11 neighborhoods were hit by either car bombs, roadside blasts or sticky bombs attached to cars. There was at least one suicide bombing and the blasts went off over several hours.

For many Iraqis and the Americans who fought a nearly nine-year war in hopes of leaving behind a free and democratic country, the events of the past few days are the country’s nightmare scenario. The fragile alliance of Sunnis and Shiites in the government is completely collapsing, large-scale violence with a high casualty toll has returned to the capital, and Prime Minister Nouri al-Maliki is displaying an authoritarian streak and may be moving to grab the already limited power of the Sunnis.

Al-Maliki’s Shiite-led government this week accused Vice President Tariq al-Hashemi, the country’s top Sunni political leader, of running a hit squad that targeted government officials five years ago, during the height of sectarian warfare. Authorities put out a warrant for his arrest.

Many Sunnis fear this is part of a wider campaign to go after Sunni political figures in general and shore up Shiite control across the country at a critical time when all American troops have left Iraq.

Because such a large-scale, coordinated attack likely took weeks to plan, and the political crisis erupted only few days ago, the violence was not likely a direct response to the tensions within the government. Also, al-Qaida opposed Sunni cooperation in the Shiite-dominated government in the first place and is not aligned with Sunni politicians.

The Sunni extremist group often attacks Shiites, who they believe are not true Muslims.

Additionally, as Tony Karon reports for TIME (“Baghdad Bloodbath Threatens Sectarian Chaos in Iraq: Will Iran Stoke or Douse the Fires?”), the political balance is falling apart just as quickly.

The move against al-Hashimi coincides with the withdrawal from parliament of the predominantly Sunni Iraqiya bloc, prompting Maliki to urge the legislature to pass a vote of no confidence in deputy prime minister Saleh al-Mutlaq, the Sunni faction’s most senior figure in the legislature. And, Maliki warned, the boycott of parliament would result in Iraqiya cabinet ministers losing their positions, ending the inter-party accord that formed the basis of the agreement to seat his government. Iraqiya, whose future participation in what had been envisaged as a consensus government but has in practice been run almost entirely by Maliki’s faction, now appears in doubt, accused Maliki of being “the main cause of the crisis,” and urging his Shi’ite-dominated bloc to put forward an alternative candidate for prime minister.

Many of the Sunni leaders, including al-Hashimi, now support a bid by three Sunni provinces — Anbar, Diyala and Salahuddin — to band together into an autonomous zone on the lines that the Kurds have done. That’s an outcome Maliki is determined to avoid, seeing it as strengthening a beachhead in Iraq of regional forces antagonistic to his rule. Indeed, a union of three provinces that had been the cradle of the Sunni insurgency, and which abut Syria, would strengthen the strategic challenge to Maliki in Baghdad — even more so if President Bashar al-Assad were overthrown by Syria’s Sunni majority. Sunni leaders in those provinces have spoken of Sunni insurgencies on both sides of the Syria-Iraq border amplifying one another. And the al-Qaeda element has always sought to turn Sunnis against participation in the Shi’ite-dominated political system.

The power struggle between Sunni, Shi’ite and Kurdish political factions has been waged in different forms since Saddam’s fall, but it appears to have entered a new phase in recent years, once the clock began ticking down towards the U.S. withdrawal. Maliki has been widely accused of steadily amassing power, particularly through his control over the security forces, and demonstrating his intent to suppress domestic challenges to his increasingly authoritarian rule.

The Prime Minister’s attack on the Sunni political class signals a new round of political brinkmanship, with the danger of a relapse into civil war exacerbated by regional tensions, particularly between Iran — the main outside patron of Maliki’s government — and Saudi Arabia, which has always backed the Sunnis. Those two are at loggerheads in political standoffs throughout the region, from Syria and Lebanon to Bahrain, but Turkey’s growing regional influence has also antagonized Tehran. Ankara has taken a leading role in putting pressure on Iran’s ally in Damascus, President Assad, over his brutal crackdown on a popular rebellion. And last year, Turkey also played a major role in creating and backing the Iraqiya bloc.

Now, this is not an argument for re-entering the conflict in Iraq or even that President Obama’s decision to follow the withdrawal timetable negotiated under President Bush and that the Iraqi government demanded we adhere to was unwise. There were no good options available and Obama chose the least bad of them. Indeed, given how adamant the Maliki government was that we depart on schedule, it was simply a no-brainer.

Patrick Porter, a strategic studies scholar at Reading University, argues that these events should cause us to reassess the Iraqi Surge of 2006-7.

On one hand, the relatively quiet withdrawal of American troops on Tuesday vindicated one objective of the surge: to create more stable conditions to that America could pull out quietly without it being humiliated and without the kind of chaotic flight to the exits that would polarize its society.

On the other hand, the major declared objective of the surge launched by President Bush II in 2006-7 was to depress levels of violence, secure the population and thereby create critical space in which there could be political progress and reconciliation.

Advocates of enlightened counterinsurgency and muscular state-building argued that Iraq vindicated their position. They argued that the combination of more troops and more restraint played a major role in depressing the levels of violence and giving Iraq a breathing space to recover from the communal bloodletting it suffered in the post-invasion years.

But if Iraq descends again into the traumatic violence of 2005-6, we must acknowledge that this approach had its limits. It bought time and got the issue off the front pages – no small thing for a superpower that has seen presidencies destroyed in the past by protracted small wars – but a new civil war of sorts would suggest that the surge did not achieve its most profound objective.

The bottom line is that, as in Afghanistan, the ability of an alien stability operation to radically transform a society in a relatively short time is limited, indeed. As RealClearWorld’s Greg Scoblete put it in the aftermath of Maliki’s move against his VP,

This incident underscores just how fragile Iraq’s government really is. The timing of Maliki’s moves was clearly intentional and it’s hard to believe he would have pulled a stunt like this had the U.S. remained in Iraq in force. So supporters of an indefinite U.S. military presence in Iraq have a point – the U.S. might well have stayed Maliki’s hand and lent a degree of stability to Iraq that will otherwise be missing.

But this also demonstrates quite clearly that actually creating an Iraq that does not descend into violence the moment the paternalistic hand of the U.S. military is withdrawn was going to be the work of decades – or more. And that’s if everything went well – and there’s no reason to believe that it would have.

Iraq, in particular, is a hard case because of the strong ethno-religious cleavages which have been reinforced by geographical separation, the horrendous treatment of the Shiite majority and Kurdish minority under the Baathist rule that preceded our invasion, and exacerbated further by almost eight years of terrorism and insurgent violence that followed.

Regardless, however, the situation in Iraq appears to be unraveling in rapid fashion and it’s highly unlikely that the international community will be able to do more than contain it; indeed, it’s not a certainly that we’ll be able to do even that.

The key variable, however, remains Iran. Tehran has been the biggest strategic beneficiary of the U.S. invasion, and it has been the most influential foreign power in Baghdad since the moment the U.S. allowed the Iraqis to choose their own government. (They’ve returned Iran-friendly Shi’ite governments at each election.) While he may be a Shi’ite partisan with an authoritarian streak, but — contra the Saudi view — Maliki is no puppet of Tehran. Still, he’s unable to rule without Tehran’s support; it was Iran’s intervention that persuaded Sadr to throw his considerable parliamentary vote behind Maliki to give him the numbers necessary to keep Iraqiya out of power, after the Sunni-dominated bloc finished with more votes than any other list in the last election.

The question that may determine whether or not Iraq descends into sectarian confrontation, then, may be this: What does Iran want right now?

There may be an argument that stoking instability in Iraq suits Iran at a moment when Tehran is facing growing economic pressure and implied military threats over its nuclear program — a tactic of starting fires in order to demonstrate its ability to cause problems for its adversaries. Yet, there may also be reason to believe that Iran could, in fact, decide to restrain Maliki should his actions appear to be raising the danger of renewed civil warfare. The reason is simple: The status quo put in place in Iraq by the U.S. invasion is a huge strategic gain for Tehran, which saw its most dangerous enemy — Saddam Hussein — replaced by an elected government dominated by its allies. The collapse of that political order in a new round of sectarian bloodshed puts Iran’s post-Saddam gains at risk, also inviting its key regional opponent, Saudi Arabia, to intervene more aggressively to turn Iraq into a proxy battlefield.

Either way, Iran is unlikely to accept matters of such great strategic consequence to the Islamic Republic as a confrontation that could potentially draw in Iraq’s major neighbors can be decided simply by the whims and narrow agenda of Prime Minister Maliki. At a moment when the fate of Iraq’s key Arab partner, Syria’s Assad, hangs in the balance, it would take a stupendous recklessness to roll the dice on its influence in Iraq, also, by encouraging Maliki to overplay his hand.

We may be in the ironic position of Iran being our most useful ally in containing this mess.